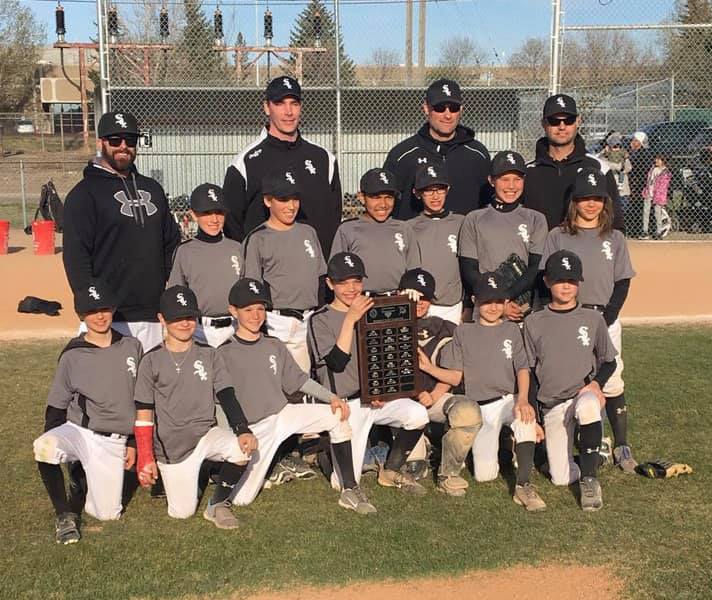 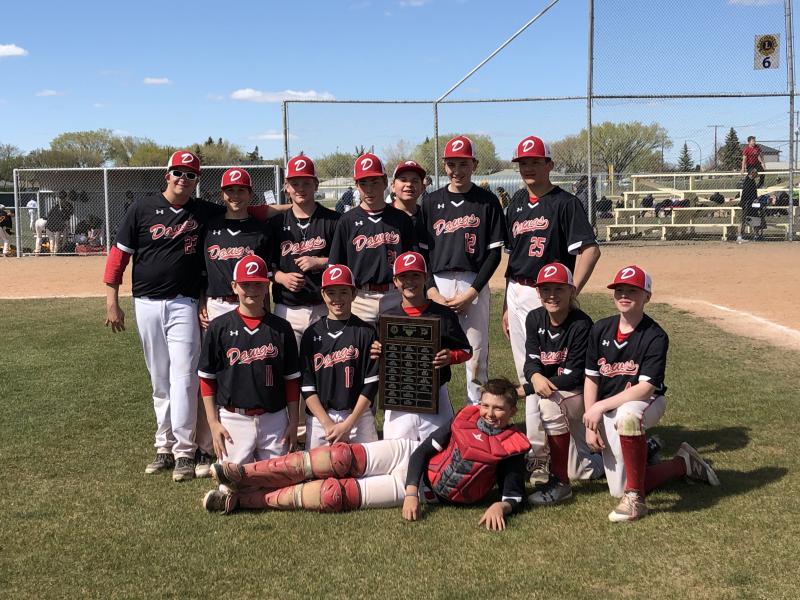 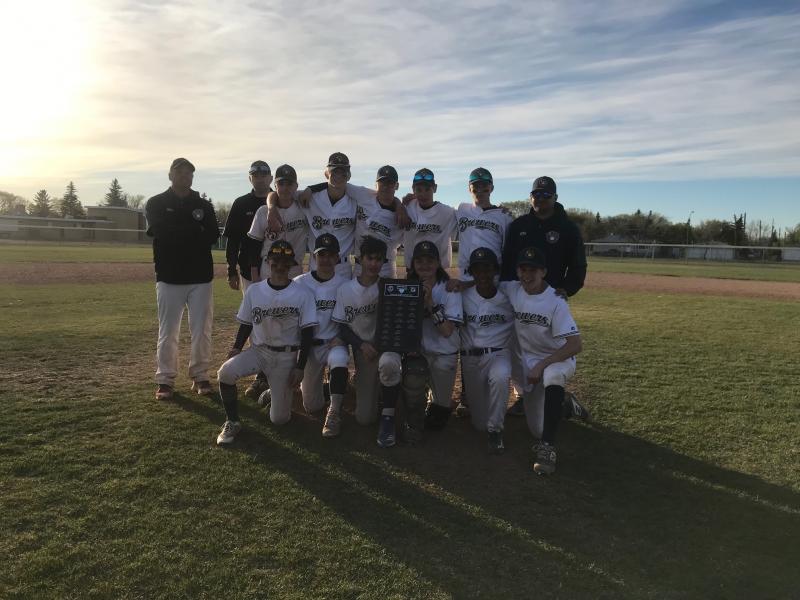 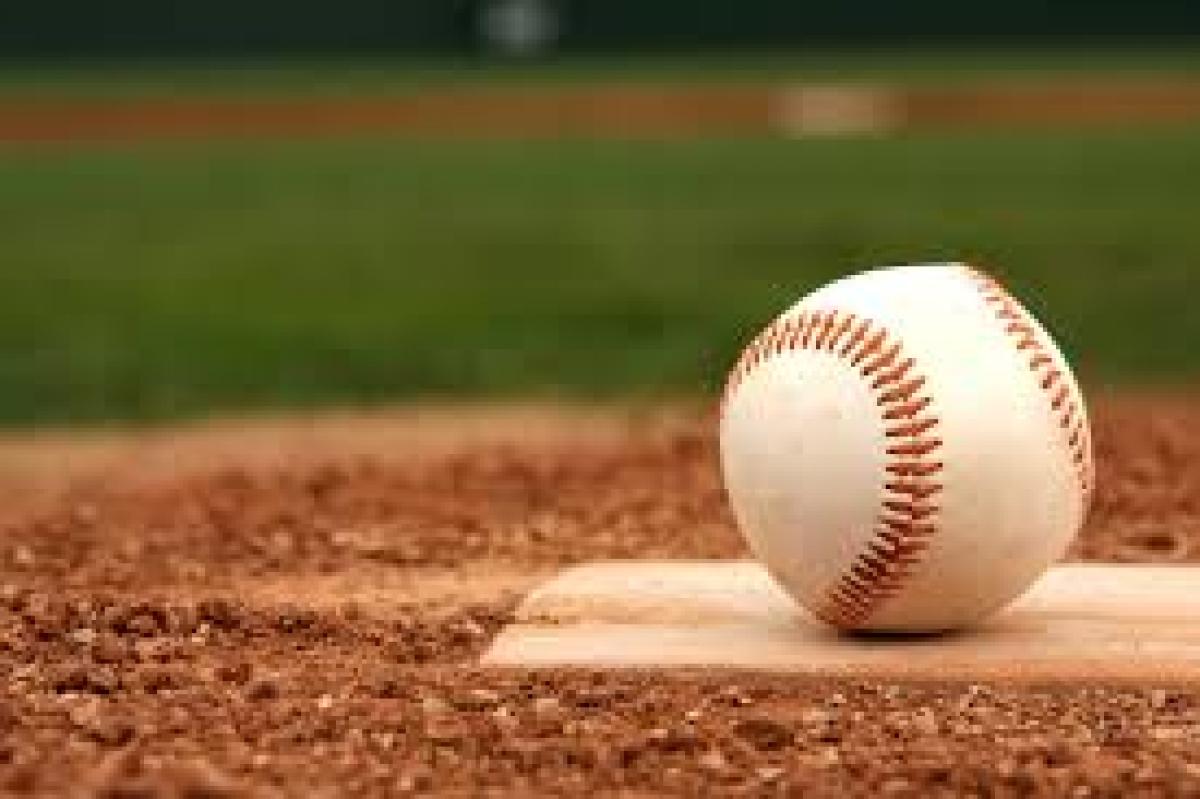 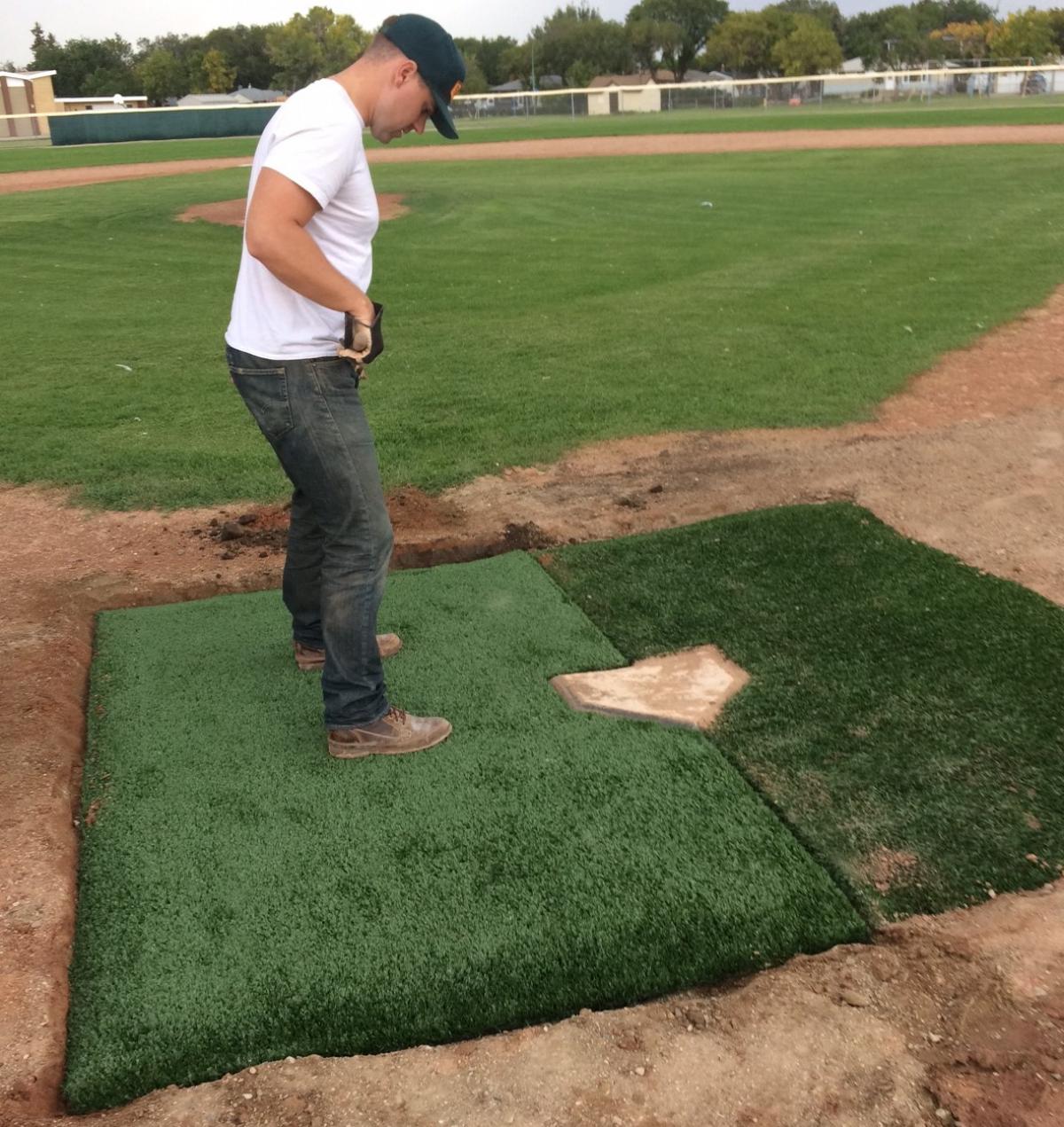 For 2020 Teams will see some great upgrades at the diamonds and clubhouse.... 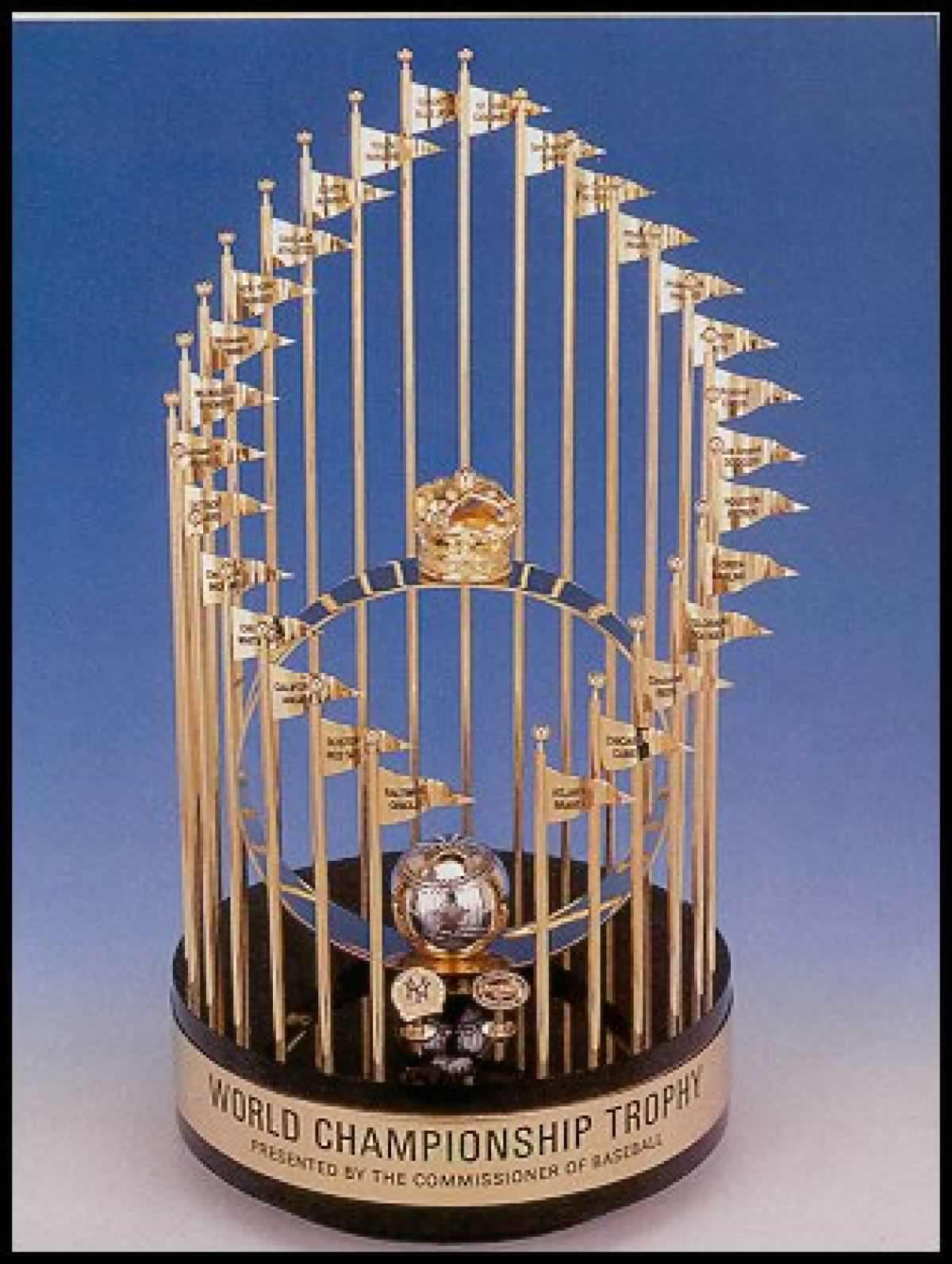 An outsatnding finish to the 2019 Legasse Cahmpinships.!!...

All updates including scores will be posted daily!...

2018 Legasse 50-50 Pool Winning Number 436897.  To claim your prize come to clubhouse and see Rose and show your winning ticket. (Or come to the concession window).

We've upgraded Lions Park! Our Bantam diamond infield has been moved 10 ft back towards the backstop with home plate now 40 ft away, creating a wider and deeper outfield! We've also moved our Center diamond outfield fences back by 10 ft in the corners and 20 ft straight away!  We look forward to another great Legasse Tournament in 2016!!

Looking for some extra baseball work between games ? Head out to RBI , mention Baseball Regina and enjoy their spacious baseball faculty .  http://www.rbitraining.com

Some highlights this weekend ; the extra innings victory by the Bantam Buffalos over the Regina Pacers and a big home run by Mosquito White Buttes Tate Olsen.

Looking for some extra baseball work between games ? Head out to RBI , mention Baseball Regina and enjoy their spacious baseball faculty .  http://www.rbitraining.com

A very nice note from the St.James A's:

Leo, just a quick little note from the players and parents of the St. James Pee Wee Aï¿½s baseball club to thank you and the organizing committee for putting on a fantastic tournament.
Even though Mother Nature tried itï¿½s hardest to prevent the tournament from completing, the fields were in great condition.
The competition and hospitality was first class!!
You will be seeing both our Pee Wee and Bantam teams in the tournament again next year.

The Bantam Division and Peewee Divisions are wood bat divisions. Bats ( if needed ) are supplied by Legasse sponsors.

Grass Infields, double batting cage and a clubhouse with full kitchen concession contribute to a great setting for baseball!

An outstanding weekend of baseball that saw great weather 19, 19 and 21 degrees with little to no wind Friday and Saturday......a home run by mosquito player Dominic Dovell of the Whitebutte Broncos, a 10 inning Championship final in Peewee and a great run of wins by the Meunster Redsox in the Bantam division. Congratulations to all for a fun weekend of baseball.

Notice - Please review the Rules for the upcoming Legasse Tournament. Click the tab labelled Rules. Have a great weekend and tournament everyone

Congratulations to our 2013 Legasse Champions!  Fans were treated to 3 exciting, down to the last out finals.  All three games featured last inning excitement as the trailing teams put up a major threat to put the pressure on the home team, including a terrific rope of a throw from right field by Buffalos Bantam player Noah to home plate to put out the tying run by Estevan and end the game.  In Pee Wee Swift Current advanced to the finals after 2 extra innings in their semi final, and were able to come back from a 6-0 deficit early in the final to having the tying run on base in the last inning.  In Mosquito, it was a 0-0 game until the 4th inning, when Swift took the lead but Weyburn came back in the 5th to go ahead.   Lots to cheer about in all 3 games!!

What a great day.  Weather awesome even at the 8 am games it was shirt sleeves!!  And some great ball performances.

Lloydminster Twins Darien Gamble"s 2 run HR in the bottom of the 7th pulls the Twins into a 2-2 tie with the Winnipeg South Chiefs.

Estevan's Josh Brown hit a solo HR in their win over the Whitesox.

2013 will see a new grass infield (pictured above) for our Mosquito Division. See you all at the Ball Park!

Dylan Flasch (right) of the Lloydminster Twins catches a fly ball while teammate Kaiden Zacharias avoids a collision in a Saturday bantam AAA game against the Regina Buffalos during the Legasse Invitational Tournament. The Twins went on to win 12-8 at Columbus Park. In Sundayï¿½s bantam AAA final, the Regina Pacers blanked Lloydminster 6-0. Ryker Toffan threw a three-hit, complete-game shutout while striking out seven. Alex Galloway had a two-run homer for the Pacers. In the tournamentï¿½s mosquito final, the Regina White Sox edged Swift Current 9-8. White Sox shortstop Jervahn Gyorfi made a double play in the final inning to preserve the lead and the victory. The Weyburn Youngfellows won the pee wee title. REGINA LEADER POST STORY/PIC

After 3 nice days topped off with a clear blue sky and 20C the games have been great.

Weyburn Peewee Beavers launched a couple of homeruns in their semi final win over the Regina Peewee Pacers!

Llyodminster came out on top with a 2-0 win over Winnipeg South in one semi today. Pitching was the order of the day from these two great teams.

Bantam WhiteSox pitcher Ryan Schienbein pitching performance in a 3-0 win over Carlyle earned him the game ball from the umpire.

Sunny and 21 degrees!! Great day for the Champions round.

Mosquito Division- In another great matchup between Weyburn and the WhiteSox.   Round Robin champs Weyburn scored 3 in the 5th to set up extra innings. However it was the WhiteSox with 2 at the top of the 7th that gave the WhiteSox the Division Championship.

Peewee Division - Saskatoon Cardinals game up with a solid day of baseball winning 3 of 3 and claimed the Peewee Championship.

Riley Croal unleashed a rare Home run in Mosquito play today to lead his team over Regina Buffalos in round robin play!

Holy Bautista  (Toronto Bluejays Slugger)!!! Kyle Pososki of the Bantam Winnipeg Pirates lead his team with a 3 for 3 performance. All Home runs!!

A 2 HR performance by Nathan Haroldson of the WhiteSox wasn`t enough as the Regina Buffalos squeeked out a 3-2 Win to claim the Bantam Crown!

Wpg South Chiefs slug out a 6-4 win over the Regina WhiteSox for the PeeWee Championship!  Like his older brother who plays on the Bantam club Conner Bowey pounded out a home run to lead the offense. Luxon Glor who got the win also hit one for the books. His straight away launch  in a game yesterday  looked like a homerun but bounced off the top of the fence and fell in for a standup double. The Baseball gods teased on that one.

Weyburn`s Ryan Gaab hit a walkoff Grand Slam in the bottom of the 6th for a 8-5 victory over the Regina Whitesox.  An absolute bomb the went straight away center field and a thrilling finish to a super Mosquito Final.


Wpg South Chiefs Bantams go down in 10 innings to Regina Buffalos in the semi final.  In a repeat of last year`s matchup that Winnipeg won in 12 innnings the Buffalos scored on a 2 out 2-2 pitch to claim victory.  The sensational game included a game saving play at the plate in the 7th by Wpg to send the game into xtra innings.  After stalling a Buffalo threat for 3 innings Wpg`s Madison Bowey launched a 2 run HR to give Wpg a 3 run cushion going into the bottom of the 10th.  Then the Buffalo`s chipped away. A hard hit ground ball by Buffalo`s Andrew Argue that Wpg short stop Matt Dunstone, deep in the hole, made a great backhand catch on but couldn`t get the dig from first base capped the thrilling comeback for Regina.

The first ever T.V broadcast of a Legasse baseball game was an exciting 8-5 by the Weyburn Youngfellows over the Regina Whitesox.

(1) An extra innings win (4-3) by the Estevan Luscar Haulers over the Regina Whitesox in the Mosquito Division.

(2) A big time well played ball game as the Saskatoon Cardinals  captured the PeeWee Crown with a 2-0 win over the Swift Current Indians.

(3) A nailbiting thriller as the Winnipeg South Chiefs defeated the Regina Buffalos 5-4 to win the Bantam Division Championship.

ACCESS TV will be broadcasting the Friday May 15 game between the Peewee Regina WhiteSox and the Weyburn Youngfellows.

SCHEDULE  and Rules are now posted!!!

Use sponsor button to access sponsor rates at our Host Hotels

The Bantam Division and Peewee Divisions are woodbat divisions. Bats are supplied by Legasse sponsors.

Grass Infields, double batting cage and a clubhouse with full kitchen concession contribute to a great setting for baseball!

The Swift Current Indians are the first ever Woodbat Champions for the PeeWee Division with an 11-4 win over the Regina Pacers. The young players all demonstrated surprising skill swinging the wood and may be a baseball force to reckon with in the years to come!

A thrilling 2 out basesloaded play at home gave the Regina Pacers the 5-4 win over the Regina WhiteSox as the Pacers claim this years Mosquito Division Title.

Kurtis Knaus capped off a Pacer 4-1 semi final win over the Regina WhiteSox with an amazing 3 pitch closing inning...2 pop ups and a comebacker. A record inning for pitching performances. The Pacers advanced to meet the SwiftCurrent Indians in the Peewee final.

Saturday Highlites
Another Legasse first as Megan McLean of the Regina WhiteSox.became the first girl to blast a homerun in the Mosquito division. The record setting hit was into a wind that gusted at times to 30 mph. Awesome!

Friday Nite Highlites
Jager Toffan of Regina Pacer PeeWees claimed the first Homerun/GrandSlam in PeeWee Woodbat History as the Pacers went on to down Yorkton Cardinals 12-2.

Spectacular Weather Sunday and Spectacular Baseball! Congratulations to all participants and to this year's Champions;

Please note that the COMFORT INN is full. Please contact QUALITY INN for rooms. Use the sponsor button to get information on our sponsor hotels.

Applications are now being accepted and posted under 2007 teams (Divisions button). The Bantam Division continues to be a woodbat division. Grass Infields, double batting cage and a clubhouse with full kitchen concession contribute to a great setting for baseball!

Yogi Legasse ended his 2006 tournament run with a 2 homerun performance against the Regina Buffalos and a starting role in the Regina Jays Championship victory. The tournament is named after his grandparents who were long time volunteers at Lions Park. This marks the 29th year of the Legasse Tournament. Congratulations Yogi!

- JD of the Regina Buffalos who hit a 7th inning HR to lead his team over the Calgary Cubs and into the playoffs.

- Pitching performances by Tyler McWhirter (Regina Jays) and Ryan Tulloch (Regina pacers). Both threw complete games in the Bantam final. The contest was tied 2-2 with a dramtic 7th inning HR by Brett Forst of the Jays. It ended after the 9th on the strength of Jay's Jordan Antic's HR. His first of the season.

-An exciting comeback win by the Mosquito Saskatoon Cardinals over Pilote Butte Allstars. Down 10-5 the Cards roared back to a 14-13 win.

-a late game 3 run HR by Cole Thorpe to lead Yorkton Bantams over the Saskatoon BlueJays and into a semi final berth.

-the third consecutive championship win by a PeeWee WhiteSox team


-----2005 ---Thanks to everyone (volunteers and teams )for a great weekend of Baseball. 22 Teams, a fantastic wood bat Bantam event and 42 ballgames later...a fun way to spend a weekend!! Tournament pictures are now complete!

GJPHOTO has over 2000 tournament photos for viewing and purchasing at
http://www.gjphoto.ca/index.shtml They're great shots!

Congratulations to all particpants and of course the Division Champions.

See you next year!