Cardinals Run the Table at This Year's Baseball BC 15U AAA Qualifier; West Coast Goes 3-0 Outscoring their Opponents 22-2 Clinching a Berth at Baseball BC's 15U AAA Provincials in White Rock 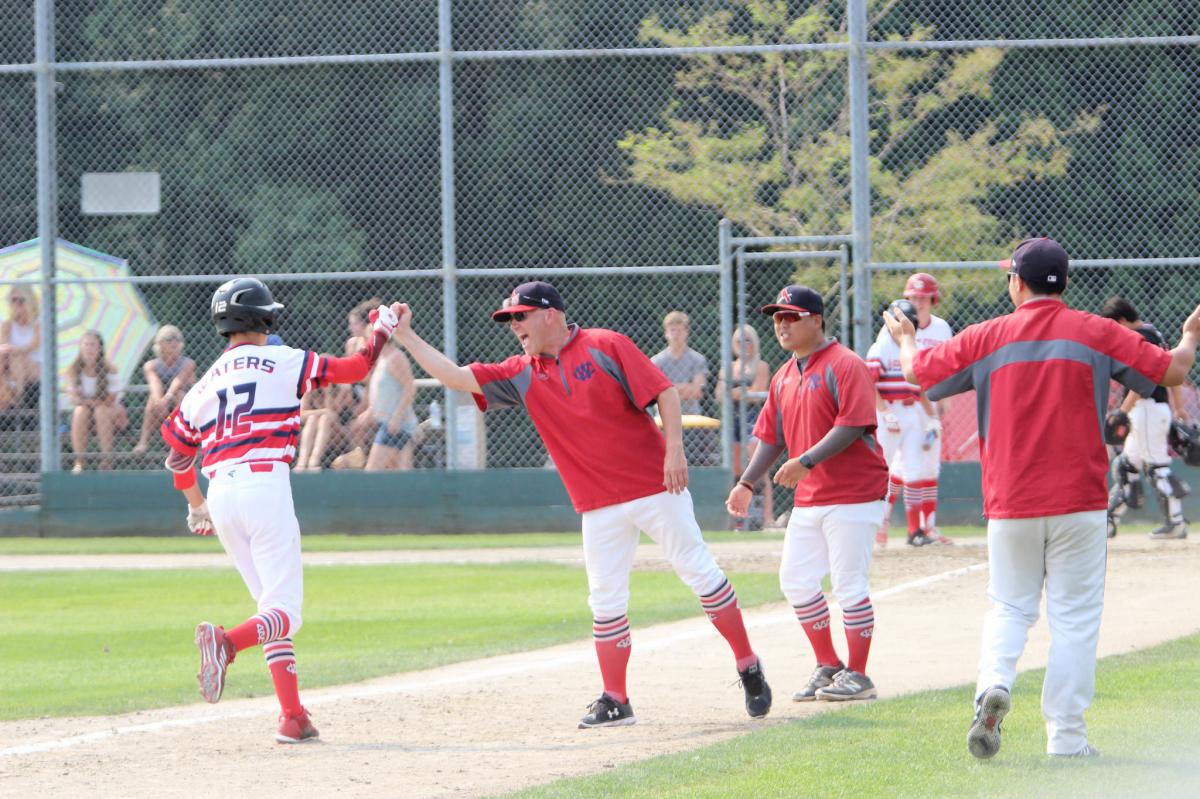 Their first test was against the last seeded Okanagan Athletics. Yam gave Wylie Waters the start in this one as the first year from Vancouver Minor was now tasked with the challenge of winning a pivotal first round matchup against the team from the interior. Okanagan opposed with southpaw Lane Hojnocki, who was fresh off a bronze medal competing with 2 of his other teammates (Delisle, Froehler) on the Thompson-Okanagan BC Summer Games team.

The top of the 1st saw Nagatomo erase Okanagan’s first hit and baserunner by throwing their 2-hitter out on the basepaths on an attempted steal of 3rd to end the half inning giving West Coast the chance to take the lead in the bottom half of the first.  The bottom of the 1st played out in similar fashion to the top of the 1st as Hendriks (2-batter) would reach base on a walk but Hojnocki made the free pass moot as he would go on to strikeout the side stranding Hendriks. Both starters got through the 2nd inning with no damage as Hojnocki looked stronger in the 2nd than he did in the 1st, erasing a hit by pitch with a 1-4-3 double play in a very efficient 4 pitch inning.

Waters countered with a 12 pitch top of the 3rd giving way to West Coast Cardinals offence who were looking to strike first against Hojnocki who was looked locked in after 2. Nagatomo woekd a 6 pitch walk to leadoff the offensive half of the 3rd for the Cards. With runs looking like a premium in this game with a solid lefty on the bump with a good move to 1st, Heilker executed a SAC bunt moving Nagatomo to 2nd. The decision to move Nagatomo up to 2nd didn’t pan out as the top 2 hitters in the Cards lineup weren’t able to bring the aforementioned Nagatomo home keeping it locked at zeros after 3 complete.

Okanagan top of the order threatened in the top half of the 4th getting the inning’s lead off hitter on with a clean single. Nagatomo would come up big again for the Cards throwing the Okanagan baserunner out at 2nd on the CS with 2 outs, a huge 3rd out swinging the momentum back into West Coast’s corner. With West Coast still in possession of a zero in the hit column, ex-Whalley Chief Trevor Tong got a hold of a 2-outfielder as he hustled around 2 and ended up sliding in safely at 3 with West Coast’s first hit of the ballgame and Tong’s second triple of the year. With Okanagan’s defence forced to play in on 4-stick Lefebvre, the Cardinal first baseman took advantage of the defense and drove a single up the middle bringing Tong home for the first run of the game. Lefebvre would steal 2nd and advance to 3rd on the throwing error by the Okanagan catcher setting up Yuen with none out, the West Coast vet Yuen would drive a ball through the right side of the drawn in infield scoring Lefebvre with ease for a 2-0 lead. 2-0 Cards after 4.

The Cardinals tacked on one more run in their offensive half of the 5th as the new Okanagan pitcher the hard-throwing Tyson Hickson couldn’t contain Hendriks at the plate as #38 drove a 2-out deep fly to centre for West Coast’s second triple of the game. Hendriks would later score on a dropped 3rd strike that Maunahan reached safely on. 3-0 Cards after 5.

Waters said with confidence to his manager that he was good to continue on the mound with a 3-0 lead, Waters got the first two Okanagan hitters on the inning to groundout but the former South Van little leaguer had trouble getting that final 3rd out of the 6th as he hit the Okangan batter with 2 outs and nobody on while the next hitter reached base on an error by the Cardinal first baseman. With the tying run at the plate, Yam turned to Duncan-Wu to finish off the 6th. The former Tri City Bantam AA ace had no trouble getting the final out and stranded the two inherited runners as he struck out the Okanagan hitter on 4 pitches thus closing the book on Waters (5 2/3 IP 0R 4H 2BB 7K) in what was a very effective outing for the 2022 graduate from Vancouver Minor. The Cards put the pedal to the metal as they scored 2 more in their last bats, arguably one the hottest hitters in first-year Willem Heilker hit an 0-2 pitch up the middle with 2 outs scoring Suzuki and Yuen from 2nd and 3rd respectively putting the Cards up 5 and passing the baton over to Hendriks in now a non-save situation.

Hendriks who was slated to start game 2 with a win against Okanagan worked around a 1-out swinging bunt single and retired the Okanagan side on 15 pitches closing the book on this game. West Coast played one of their best games defensively and got a great pitching from Waters, Duncan-Wu and Hendriks. They stayed locked in and learned from every at-bat (and pickoff move) against a tough left-hander in Hojnocki, finally getting to Hojnicki in the 4th which was catalyzed by a leadoff triple by Burnaby resident Trevor Tong. A much different feeling after this one compared to a tough loss last year in the first game of the qualifier. West Coast now tabbed arguably West Coast’s top pitcher, Cody Hendriks to start against Victoria Mariners in the next game of the qualifier where a win there would give the Cards 3 chances to win one game.

With the Victoria Mariners’ 13-3 mercy victory over Chilliwack the second round matchup was set between the aforementioned Mariners and the West Coast Cardinals. Victoria sent their 1b to the mound in the form of Taine Clague who also recently competed at this year’s BC Summer Games, opposing Clague was second-year Cardinal vet Cody Hendriks whose last start came against the Sask5 Giants in the Okotoks Canada Day Classic semi-final. #38 wearing they varsity white jersey with red stirrups complimented by the navy and white trim was looking to make it 3 no-hitters in as many starts.

Both starting pitchers worked around some trouble early to put up zeros in the run columns for the first 2 innings. The top of the 3rd saw Lefebvre help Hendriks out by nabbing a Mariner baserunner attempting to steal 2, the caught stealing seemed to have sparked the Cardinals as Hendriks led off the bottom half of the 3rd with a hard single. Hendriks would work around the bases eventually scoring on a wild pitch, with Lefebvre reaching 1st with 2 out, the biggest hit of the ballgame came in the form of Suzuki. With 2 outs, Suzuki would smash a ball to deep left-centre scoring a hustling Lefebvre with ease from 1st on the RBI triple. Waters would promptly make it 3-0 as an infield pop up fell in middle of 3 infielders scoring Lefebvre.

Hendriks put the Mariners right back on their toes as he retired the side in order on just 8 pitches giving West Coast a chance to tack on a few more in the bottom half of the 4th. Lefebvre would score Tong from 1st with 1 out on a deep RBI triple to centre making it 4-0 after 4 complete.

A leadoff double by one of the Cards’ hottest hitters in Willem Heilker got the party started, a Hendriks single plated 1, Lefebvre double scored 2, Tong scored on a wild pitch while Yuen scored Lefebvre with a hard single and Waters put the nail in the coffin with a SAC fly to centre ending this one 10-0 mercy for the West Coast Cardinals over the Victoria Mariners.

The second berth for the Baseball BC 15U AAA Qualifier was now being handed out and it pitted the West Coast Cardinals against the Coquitlam Reds. A much anticipated matchup for many as it would be the first time the two teams in different governing bodies but coinciding boundaries were competing against each other. Many relationships were up against each other, some friendly rivalries some not so much. Regardless, the West Coast Cardinals had a plan going into the qualifiers and it was to pitch Duncan-Wu in game 3 of the qualifier (if they won the first 2) and they stick to their plan. Coquitlam went with Liam Lewis on the bump who is a strong 2022 grad, Lewis tried out for the Cardinals back in February but due to BC Minor’s inability to follow through on “unlimited imports” Lewis was turned away from the Cardinals due to politics. Lewis who was also selected to the 2019 Asahi Japan Tour team was now up against 5 of his Japan Tour teammates and 2 of his coaches trying to vault his Reds into the provincials 2 weeks from now.

Duncan-Wu looked strong to begin this one retiring the Coquitlam side on 6 pitches. Hendriks took Lewis’ first offering of the game and deposited into left for a clean single. Hendriks would swap places with Rogers on the fielder’s choice, Rogers wasted no time showing off his speed swiping two then scoring from 2 on a single by Lefebvre.

Cardinals’ starter Duncan-Wu would follow up the 6 pitch 1st with a 7 pitch 2nd and even contribute at the plate in the bottom half of the inning. Heilker would stay hot at the plate with an infield single then reaching 2nd on the ill-advised throw by the Coquitlam shortstop. With West Coast’s 8-9 hitters due up, Nagatomo would move Heilker over to 3 with a SAC bunt as Duncan-Wu would plate Heilker with a SAC bunt of his own much to the displeasure of many of the Reds’ players and coaches. Despite the disagreements across the field, the Cards were now up 2-0 after 2.

The Cardinals would go on to score 2 more in the 3rd as Rogers would reach on the walk and in the next two at-bats would swipe 2nd and 3rd forcing the Reds infield to draw itself in again where Yuen would shoot a ball through the right side of the drawn-in infield plating Rogers. Following a steal and throwing error from the Coquitlam catcher, Suzuki would bring Yuen home on a 2-out RBI single. 4-0 Cards after 3.

The Reds seemed to be content in giving up at-bats as another 7 pitch inning got Duncan-Wu and his teammates back into the dugout to try and score some more runs in the bottom of the 4th. Duncan-Wu would help his own cause by driving a double into the right-centre gap to lead off the offensive 4th, Tong, Lefebrve and Yuen would all provide RBI singles making it 7-0 Cards after 4.

Duncan-Wu would give up a run in the 6th and work into the 7th inning for the first time this year. Although Yam pulled Duncan-Wu with 2 outs remaining, the aforementioned Duncan-Wu gave the Cards arguably one his best starts going 6 1/3 IP 2R 1ER 4H 0BB 7K). Max Yuen who was already 3/3 today at the plate retired the 2 batters he faced ending this game as the Cards clinched the second berth up for grabs at this year’s Baseball BC Qualifier.