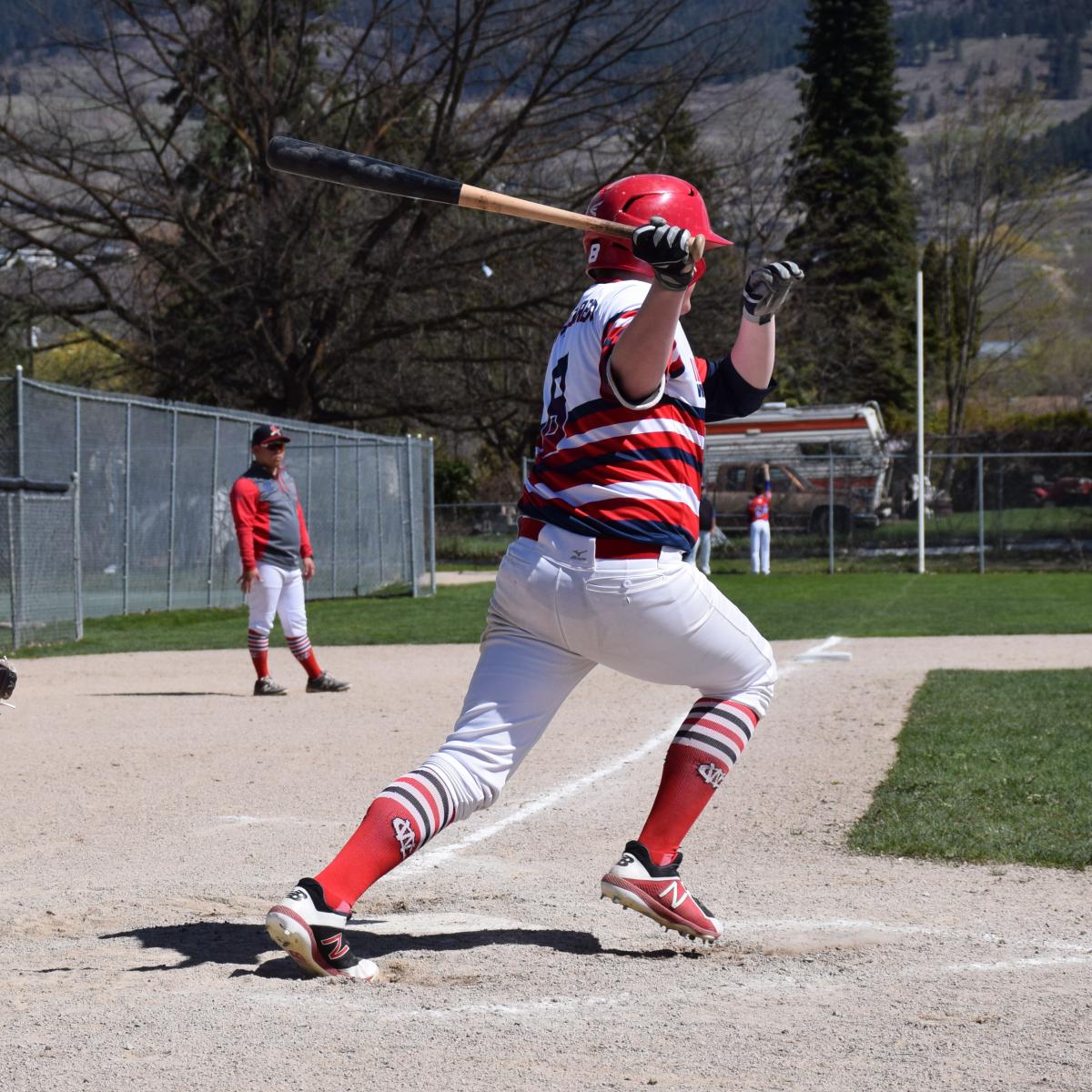 The West Coast Cardinals were looking to complete their first 4-game series sweep of a team this season. With 2 1/2 games to be played and the weather being less than ideal leading up to a noon start time, the first game was pushed back 1.5 hours to accommodate for the lofty field prep needed. In the end, the weather turned out great, the field was in great shape and the lowly Richmond Chuckers fell victim to a 4-game series sweep at the hands of their feathered rivals, the Cardinals.

This game was pretty uneventful picking up where we left off Bottom of the 4th, West Coast leading 3-0 and batting. The always animated Dubreuil for the Richmond Chuckers was back on the mound and looked shaky to begin walking the first scheduled batter McRae on 4 pitches not near the strike zone. Swaim, Richmond's backstop promptly helped his battery-mate out by throwing the speedy McRae out at 2nd directly after a strikeout of Nagatomo. Dubreuil then got the always dangerous Hendriks to fly out to right keeping it 3-0 after 4. We jump to the 6th where the score is still 3-0 for the Cards, two 1-out walks by Rogers to kick off the 6th spelled the end of a quality outing for the tall right-hander as Yam went to a strike-throwing machine Duncan-Wu in relief. Lunny (Richmond's coach) had Tran lay down a sacrifice bunt with 1 out advancing both runners to 2nd and 3rd with 2 out. The move would pay off as Dubreuil would score both runs thanks in part to a botched groundball to the Cardinals shortstop. It took Dubreuil 4 pitches to advance 2 bases, and now the tying run was standing just 80' away. It seemed that Duncan-Wu (much like every other pitcher in this contest) was fighting the conditions of the muddy mound, Duncan-Wu's 3-1 delivery to Dolphin went straight to the backstop as Dubreuil hustled from 3rd eager to knot the sore up at 3s, but Lefebvre and Duncan-Wu teamed up to tag the aforementioned Dubreuil out at the plate to end the threat and keep it a one run lead for the Cards. West Coast got a run back in the bottom half of the 6th when Duncan-Wu batting from the left side of the plate (1/1 this year with a triple) added to his collection of the cycle doubling to deep centre scoring McRae from 1st on the 2 out run and hit. 4-2 Cards after 6. Duncan-Wu had no problems putting the Chuckers away in the top half of the 7th as the Cards finished what they started in an uneventful first game of the day. - LY

The Cardinals showed no signs of slowing down and put Richmond in a hole early scoring 3 in the early going. Hendriks worked Tran (Richmond's starter) for a leadoff walk, stole 2nd and 3rd before trotting home on a deep RBI double from 3-stick Tong. Waters then traded spots with Tong providing a 2-out double of his own the aforementioned Waters eventually scoring on a pass ball to make it 3-0 Cards after a half inning of play. Lefebvre got the start for the Cardinals in this one, his first of the season. The usual backstop for West Coast looked shaky early loading it up for Richmond's Hanratty but Lefebvre would get Hanratty to groundout 1-3 to end the threat. Both Tran and Lefebvre would settle down after less than ideal 1st innings, Lefebvre would finish with quality pitching line of 3 IP 3 H 0 R 2 BB 4 K. The Cards would score two runs in the 4th courtesy of Hendriks who scored on a wild pitch after swiping 3rd (1 of 5 stolen bags for #38 in this game) and reaching base via. the walk. Waters would knock Tong home with 2 outs with his 2nd hit of the afternoon and collecting his 2nd RBI of the day. Matthew Maunahan was next in line after Lefebvre and although giving up a run (unearned) struck out 5 and gave up 1 hit in a solid 2 inning relief outing. A Max Yuen pinch hit RBI single and Lefebvre SAC fly scored single runs for the Cards in the 5th and 6th respectively while McRae put the nail in the coffin throwing 2 scoreless innings striking out 5. Maunahan in this game was 3-4 at the plate with a double while his teammate from last season, Waters went 2-3 with a double and 2 RBIs. Tong added to his ridiculous OBP reaching base 3 out of the 4 times and increasing his AVG with 2 hits (including a double). West Coast took this one home with a clean 7-1 victory. - LY

The brooms were out for this one as the Cardinals were looking to hand their feathered rivals another L in the respective column and sweep the 4-game set. They made this one painful but not quick as the Cards scored at least one run in the every inning but the last two. Suzuki wasted no time drilling Tishler's (Richmond's starter) first offering of the ballgame into centre for a single. With 1 out, Tong worked yet another walk putting runners on the corners and that's where we got our first run of the game courtesy of a textbook balk by Tishler scoring Suzuki putting the Cards up 1-0 after 1/2 inning of play. The former D6 Little Leaguer and first year Cardinal, Willem Heilker got the start for the Cards in this one and like Lefebvre last game looked shaky early on walking leadoff hitter Dolphin on 4 pitches. Heilker's defence would go to work for him in this game as Yuen and Suzuki would team up to roll their first of two 6U-3 double plays in Heilker and the Cards' favour, erasing the Dolphin leadoff walk. Duncan-Wu wasted no time getting the Cards another run as he singled on the first pitch of the 2nd inning, promptly scoring all the way from first on a Maunahan double to deep centre field. With Maunahan now standing on 3rd with 1 out, Nagatomo after a failed SAC attempt, got the second attempt to roll from foul to fair  scoring Maunahan from 3rd making it a 3-0 game. The top of the 3rd saw Tong walk (yet again) to lead off the 3rd, Heilker provided a solid double putting both him and Tong in scoring position. The Cards would score both runners in the inning making it 5-0 after 2 1/2 innings. Heilker was back out for the bottom half of the 3rd and quickly found himself in a 1-out bases loaded jam with first-year Yonatan Marom back at the plate looking for revenge after bouncing into a double play his first time up. Marom's luck wouldn't change as a ball up the middle was gobbled up by Yuen who again provided a slick 6U-3 double play with Suzuki on the back end helping Heilker and the Cards escape the inning unscathed. A Yuen RBI single scoring Nagatomo, Heilker infield single scored both Suzuki and an aggressive Yuen putting the Cards up 8-0. They would go on to score one more in the 5th thanks to a Nagatomo drive to left field scoring Duncan-Wu, and that's all the scoring we would get in this one 9-0 your final. Waters and Suzuki both threw flawless 2 innings each the former with 2 strikeouts while the latter impressed with 4 strikeouts. The aformentioned Suzuki along with Duncan-Wu, Heilker and Maunahan all had 2 hits in the route of Richmond in this 4th and final contest. -LY

The Cardinals now prepare for another date with Jon Przybyl's Kelowna Sun Devils on Sunday as West Coast will have the brooms out looking for yet another 4-game sweep.