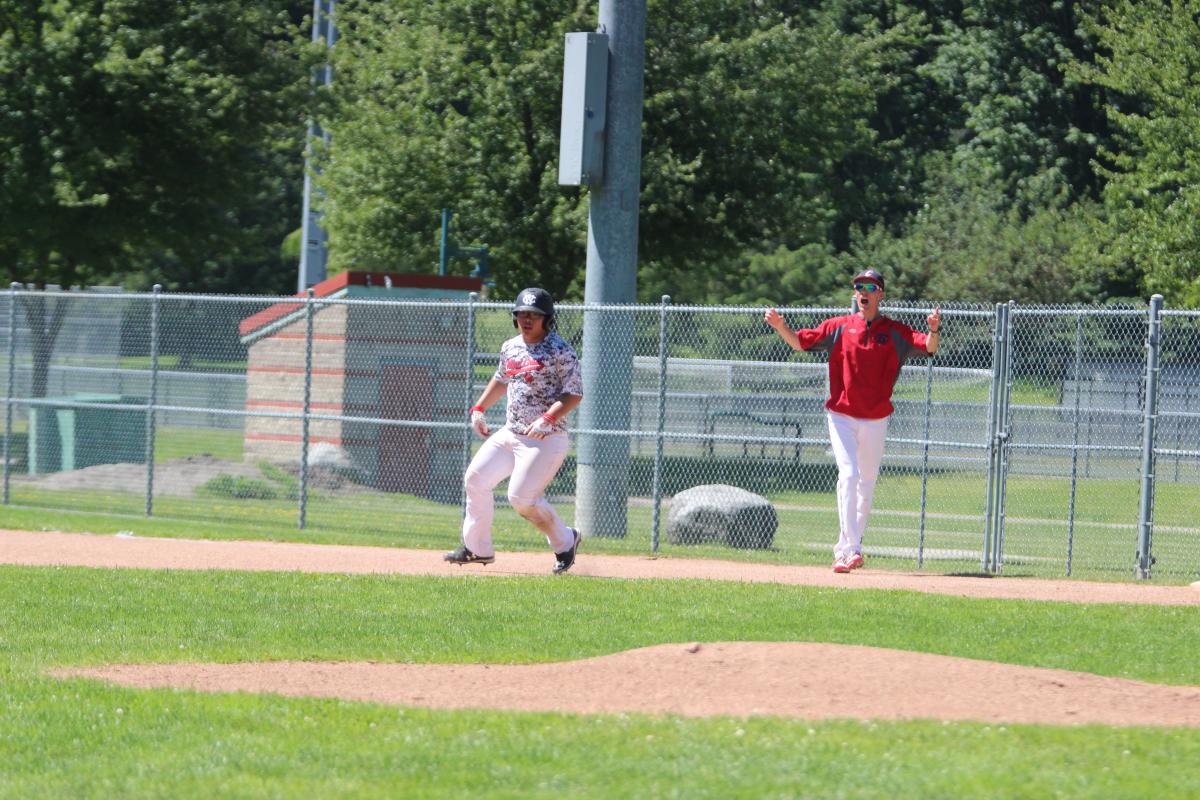 There was no doubt that this year's Baseball BC 15U AAA Qualifier was going to be an exciting and interesting one. With 5 of the top 6 BC Minor teams competing in this qualifier and all with aspirations of flying to PEI and representing their province at Nationals, any game was up for grabs and the first day of the qualifier showed just that.

With Frick's Tigers narrowly defeated by Smythe's Mounties in the first game of the 2017 Baseball BC 15U AAA Qualifier (BC Minor Portion), the Deleon's Cougars faced off against Yam's Cardinals in what has been an emotional, tight series between the two aforementioned teams this year. A 2 run victory by Chilliwack, 3 run victory by West Coast and 1 run victory by West Coast has the Cardinals with the positive record against thier rival Cougars. Deleon sent Siemens to the mound in game 1, Siemens was effective the first time out against West Coast throwing 6+ innings allowing 4 runs despite giving up 12 hits, Siemens picked up the win in that mid-May matchup. Yuen got the start for the Cards, looking to bounce back after getting the loss on two consective starts.

Jude Hall, arguably one of the best 15U players in the province was sent to hit in the leadoff spot today and the move would pay off as Yuen's second offering of the game was laced into right field for a base hit. Hall would swipe second and later score as Colebourne would smack his first of two base hits on the day, this one past Powell into L-CF gap scoring Hall with ease. The two representatives for Chilliwack at Chicago, IL during the 15U BC Select trip had given their team a 1-0 lead after 1.

The bottom of the second saw Thomas Baybay be hit by Siemens' fastball putting him on first to leadoff the inning. With Baybay off on the 2-2 pitch, Yuen elected to swing on the "run & hit" only to fly out to RF, Baybay got caught moving too far towards the next bag as Chilliwack doubled up the Cards. A 2-out single by Crozier would become moot as Powell would groundout to Hall for the final out of the 2nd. 1-0 Chilliwack afte 2 complete.

Nothing came about a 2 out single by Colebourne in the 3rd as Yuen would snare a hard liner back to him from cleanup-hitter Colahan for the 3rd out of the inning. The headline of this game report is missed opportunities and the 1st of 3 came during the offensive 3rd for the Cardinals. New leadoff the bottom of the 3rd, depositing a 1st pitch fastball into RF for a single. A couple botched bunt attempts had Suzuki in a less than ideal 0-2 hole, but on the 7th pitch of the at-bat Suzuki would single throught the right side as New would go 1st-to-3rd on the base hit, giving the Cards a prime chance to score. With speed at the top of the order, the Cards elected not to steal Suzuki and instead give up the double play up the middle trading it for a run. The top of the order couldn't get it done as pop up then, a shallow fly by Sugi made it 2 outs as New challenged Saunders' arm from CF on the flyball. Saunders would throw a strike to Colebourne at the plate who was quite far up the line to start as New's feet barely reached the plate on the slide to home, the call was out at the plate as runners 1st and 3rd none out turned into no runs. Yam was adamant that Colebourne was blocking the plate well before the ball reached the plate, but after discussion the call was upheld. 1-0 Chilliwack after 3.

We jump to the bottom of the 5th now where Yuen is throwing like his usual self, pounding the zone and keeping batters off balance. A big 5th inning from Yuen getting Chilliwack's 1-2 hitters to strikeout to end the inning, giving West Coast their 2nd of 3 opportunities in the bottom half. Crozier would leadoff the offensive 5th with his 2nd hit of the day, Yam pinch-hit Tri-City Bantam AA callup, James Bohn to hit for Powell and despite falling behind 0-2, Bohn would work a 7 pitch walk setting up runners 1st and 2nd, the first pitch after the 7 pitch walk hit New loading it with none out. Suzuki (bottom of the order) was now up, #18 was already 1/1 off Siemens but made an ill advised decision to swing at the first pitch that evidently was not his pitch and Colebourne would pop out of his crouch and made an amazing off-balance catch down the 3rd base line for a big 1st out. The top of the order was now up again with a chance to redeem themselves after failing to come through in the 3rd inning, that would not be the case in this inning again as backward K followed by a weak pop up gave Chilliwack the momentum back. 1-0 Cougars after 5.

Bohn came in to relieve Yuen, Yuen finished at 63 pitches meaning he is burned for the next two days but available to pitch in potential tie-breaker game(s) Sunday. Bohn would strikeout Colebourne to retire the stud catcher for the first time this ballgame to leadoff the 6th, Bohn would also get his lefty-lefty matchup striking out Medonca to end the top half of the 6th, a very good first inning for the AA callup from Tri-City. The 3rd and final missed opportunity came in the 6th as Hendriks would lead off the bottom half much like New in the 3rd inning with a first pitch single, Baybay not long after hit a hard single past a sprawling Hall at 3rd putting runners at 1st and 2nd with nobody out. Hendriks and Baybay would execute a textbook double steal putting runners at 2nd and 3rd none out. With runs coming at a premium and the Cardinals unable to get that elusive base hit or team AB with runners in scoring position, Yam put the contact play on with none out. Yuen would hit a dribbler to Hall at 3rd as Hall would make a great play to nab Hendriks at the plate, runners at the corners with 1 out. With Crozier who was already 2 for 2 off Siemens, Yuen would execute a start/stop steal but execute he didn't as he was easily tagged out at 2nd on the crucial baserunning mistake, 2 outs. Crozier unfortunately couldn't clutch up as he lined out to 1B for the final out of the 6th.

Chilliwack put the nail in the coffin by scoring 4 runs, all off TCI Bantam AA callups padding their lead to 5-nothing. Siemens would record the final 3 outs of the game, ending at 94 pitches and burned for the rest of the qualifier.

Hats off to Diego Colebourne of Chilliwack who was a one man wrecking crew today, 2/3 at the plate with the early 1st inning and eventual game-winning RBI single. Colebourne blocked at least double digits in baseballs today behind the dish, half of those bouncing before the plate; the Cardinals easily could have scored 3-4 runs alone on wild pitches but again hats off to Chilliwack's stud catcher for arguably one of his best games and best performances we've seen from a catcher this season. Bottomline, 3 prime opportunities and all 3 ending in nothing but frustration for a Cardinal team who put up 244 runs in 32 league games. With Cloverdale losing a late one vs. Delta in the last game of day 1, West Coast's next game vs. Cloverdale is do-or-die, both teams sit at 0-1 and cannot afford to go 0-2, both teams will throw their second year vets; Sugi for West Coast and Domanski for Cloverdale. Should be a good one!