Cardinals Defeat Mounties 4-3 Despite Only Generating 4 Hits; West Coast Sweeps the 4-Game Series vs. Vancouver Community and Finishes the Regular Season With An Impressive 26-6 Record 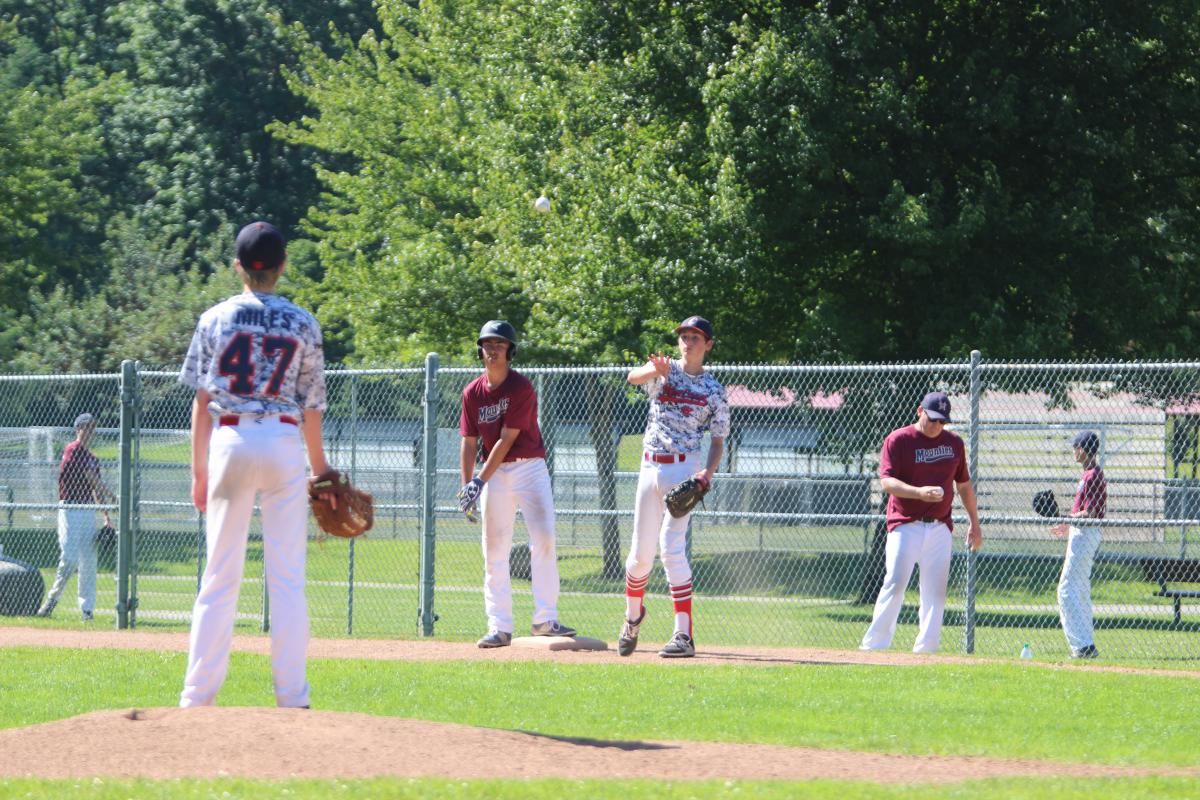 The West Coast Cardinals closed out their regular season Wednesday night against the Vancouver Community Mounties, this was also the finale of a four game set against the aforementioned Mounties. With Delta's inability to sweep the interior trip this past weekend, the Cards clinched first place in this year's Bantam AAA league which allowed Yam to rest his regulars and pitch by committee. It looked like both teams didn't have much fight in them throughout the ballgame; however the final out of this ballgame was an irregular one much like it was last Thursday. Cards took this one 4-3 over the Mounties on a Wednesday night at Hillcrest.

With three games remaining in their 2017 season and an upcoming tournament in Kamloops, Community was looking to get off the "schneid", coming to this contest Symthe's Mounties had dropped (including exhibition) 7 in a row and 8 of their last 10. Symthe sent one of his best pitchers Van Gorkum to the mound to try and stop the losing skid, Van Gorkum did an effective job of limiting the Cardinal offense this past Saturday but was credited with the loss in a 0-4 defeat to the Cardinals. Yam gave first year Taiki Suzuki the start in what would be his first and last regular season start this year. Suzuki has been phenomenal on the bump lately, in his last 5 outings (9 1/3 innings) Suzuki has let in 1 run (0 earned runs) striking out 14 batters, walking just 1 and holding opponents to a miniscule .121 batting average over those past 5 games.

Van Gorkum made quick work of the Cardinals in their top half retiring Hendriks, Sugi and Turnbull in order, while his counterpart Suzuki worked around a dropped third strike and would get Ramos to ground out 4-3 on a ball that was hit to Hendriks at SS but fielded by Sugi who was playing 2B.

West Coast would take advantage of some sloppy defence and put up a 3 spot in the 2nd inning, Kang would reach first on a walk and catch Community's catcher, Garay by surprise by taking off for 2nd. What was supposed to be a hit and run turned out into a clean swipe of 2nd by Kang, giving the first-year a career high 5 steals at the Bantam AAA level. New would work a walk off Van Gorkum putting runners at 1st and 2nd with 1 out. Suzuki would hit a hard single off the glove of a sprawling Berrington-Dom at 3rd to load it with 1 out. A strikeout followed, bringing up Fukuoka who was returning from injury with the bases juiced and 2 outs. With the runners in motion on a full count pitch, Van Gorkum would drill Fukuoka giving him a bruise and an RBI. The very next batter, 10-batter Miles would sky a pop up behind the 2nd base bag and just beyond the infield, with the runners going on contact, two runners would score as the ball would tip off Lott's glove for a 2 RBI error. 3-0 Cards after 2.

The bottom of the third inning saw the Mounties score their first run of the game, with a runner on first Suzuki would commit a critical error when fielding the comebacker, the error cost them a run as a pass ball and wild pitch would plate a run and cut Community's deficit to 2. 3-1 Cards after 3.

Kang would take over mound duties in the 4th after an effective start by Suzuki. Kang struggled early with command as he walked Hunter to lead off the inning, with 1 out and a runner on 2nd the Cardinals would be given a gift as the Mounties would fail to execute a bunt and get their lone baserunner thrown out at 3rd on the play. 3-1 Cards after 4.

Baybay who started the game on the bench would come in for Sugi and hit an hard single to 3rd with 2 outs plating Miles for the Cardinals' 4th run of the game giving them a 3 run lead once again. It didn't take long for the Mounties to get that back as in the bottom half of the 5th, Garay would hit a triple past a diving Fukuoka in right field, a free pass to Bantam AA call-up Kai Koyama-Wong set up runners on the corners with Berrington-Dom up. "B-Dom" would deliver as he would take full advantage of a belt high fastball from Kang and hit a booming 2 run double to deep centre cutting West Coast's lead to 1. The double spelt the end of Kang's night as Powell would come in inheriting the tying run at 2nd with 1 out. Powell did a masterful job of stranding the tying run as he would strike out 2 of the 3 batters he faced preserving the 1 run lead going into the 6th. 4-3 Cards after 5.

The 6th inning was uneventful which brings us to the bottom of the 7th where Powell was given the chance to record the SV. #9 from West Coast wearing the white digital camo would fall behind 2-0 to Garay to lead off the inning and on the 3rd pitch delivered to Garay who was already 2 for 2 (1B, 3B) today, Garay would smoke the fastball right back where it came from as Powell would snag the scorching liner for a scary first out. A weak pop up off the bat off Hanning made it 2 outs and the always dangerous Berrington-Dom now up representing the tying run. The second-year vet, Berrington-Dom would work a walk as Yam would now turn to left-handed hurler Miles to record the final out. Miles had a couple of jobs, to neutralize the running game with the tying run at 1st base and to retire left-handed hitter Keegan Lott. Lott was looking to make up for his fielding error that cost the Mounties 2 runs earlier in the game; however, he wouldn't even get the chance as Miles would catch Berrington-Dom leaning the other way. West Coast's first baseman, Symons would recieve the pickoff from Miles and throw a strike to Yuen at SS tagging Berrington-Dom for the final out of the ballgame. 4-3 Cards your final.

Despite only mustering 4 hits in this winning effort, West Coast handed Vancouver Community their 8th loss in a row. Suzuki was credited with the "W" while Miles picked up the unconventional 0 pitch "SV". West Coast concludes the 2017 Bantam AAA season with an impressive 26-6 record and as a reward for finishing 1st in the league they will now have the choice of home/away for every round-robin game in the provincials; additionally, their round-robin double header will be on the first day of the tournament. The Cards are now off to Puyallup, WA this weekend for the GSL Firecracker Classic where they hope metal will help rejuvenate their bats ahead of an important month of July.