Cardinals Score Three Runs in the 5th Sparked By Back-To-Back 2 Out RBI Doubles From Sugi and Hendriks; West Coast Wins 7-1 in the First of Four vs. Vancouver Community 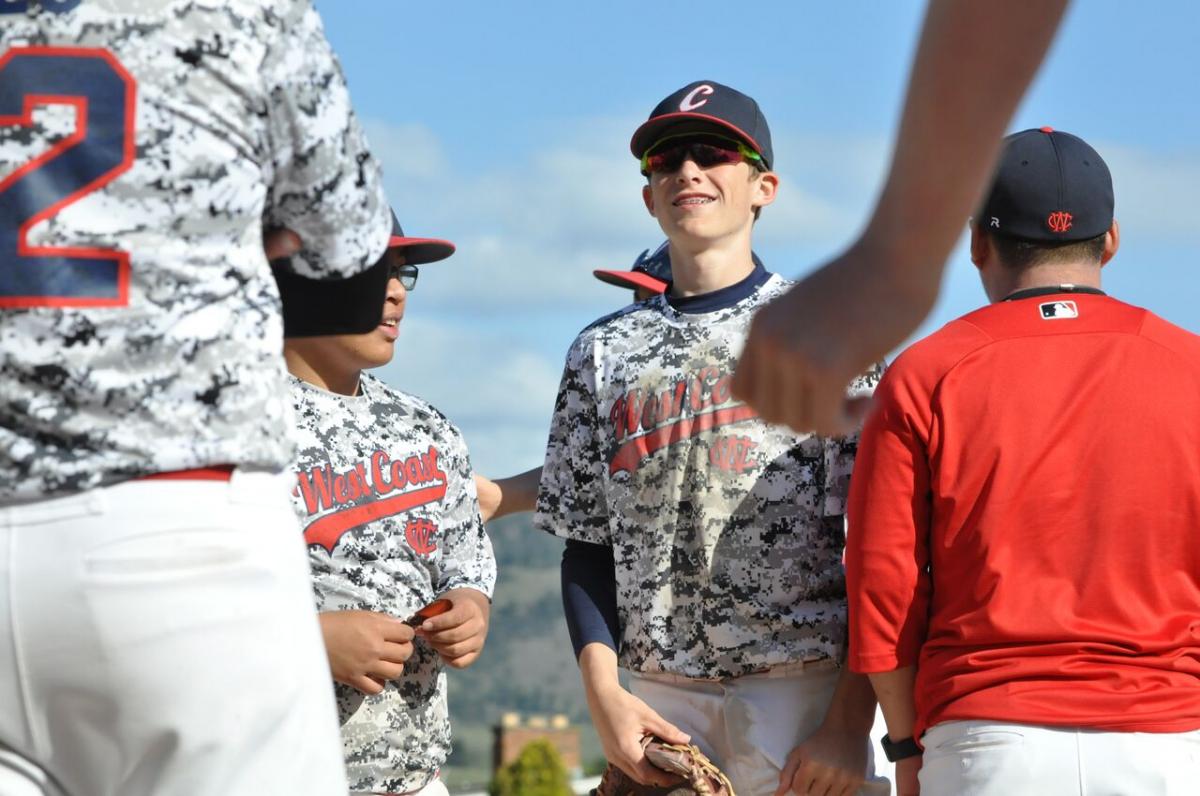 The West Coast Cardinals were on the road Thursday night for their first of four against the Vancouver Community Mounties, both teams started arguably their most reliable hurlers this year. Yuen for the Cardinals and Hanning for the Mounties, both pitchers showed why they have been so effective for their respective ballclubs all year. It was the Cards who would get the last laugh as game changing back-to-back RBI doubles off the bat of Sugi and Hendriks in the 5th gave West Coast the momentum they needed to score 3 in the 5th and 4 in the 7th en route to a 7-1 victory.

Saving the best for last? The much anticipated matchup between two division foes, the West Coast Cardinals (1st in Western Division) and the Vancouver Community Mounties (2nd in Western Division) kicked off Thursday night, this would be the first of four these two teams will play against each other in a span of a week. Thursday night was the second game in as many days for the Mounties and also the second of 7 games this week for VanComm! Smythe (Vancouver Community's head coach) and his squad were coming off an unfortunate split against a lowly Abbotsford team this past weekend, not to mention receiving a beatdown from North Shore Prep a day after the Cardinals were victorious against the aforementioned North Shore Prep team. The Cards sent Yuen to the mound, who has won his last six starts and 9 of his last 10, the first-year Burnaby resident from West Coast was looking for his 11th win of the year to match the number on the back of his jersey. Community countered with Hanning a grade 7 who has had a phenomenal year on the mound, a confident young ballplayer featuring a plus changeup, nasty breaking ball and respectable fastball.

Hanning quickly showed that he wasn't messing around today, #17 rocking the navy blue drifit confidently threw an 0-1 breaking ball to Turnbull establishing early that his secondary pitches were going to be on full display tonight at Hillcrest. The sixth pitch of the at-bat was another breaking ball this time Turnbull unlike the last two pitches was unable to foul it off and swung through it only to go through the wickets of catcher, Garay; the leadoff hitter for West Coast would reach 1st to kick off this ballgame via. the good ol' dropped third strike. 4 straight balls to Sugi put runners at 1st and 2nd and none out. With 3-batter Hendriks up, Hanning threw a quality secondary pitch in a hitter's count getting Hendriks to ground out into a clean 6-4-3 double play, Turnbull would be left stranded at 3rd as the Mounties would escape a 1st inning that looked destined in the Cards' favour. Yuen, who was rocking the fresh braces looked in fine form to begin the ballgame as Yuen would only need 8 pitches to retire the 3 leftys at the top of the Community's lineup in order.

Hanning fell into trouble early again in the 2nd as his counterpart, Max Yuen would hit a single up the gut to lead off the 2nd. A swipe of 2nd followed by a groundout moved Yuen to 3rd with 1 out and Kang now up. Kang who was crushing the ball a day before at Eagle Ridge during batting practice got a hold of an 1-0 fastball with the infield in and hit a scorcher to Iverson at 3rd who didn't need to move an inch, Iverson snagged the liner and stepped on 3rd to complete Community's second double play in as many innings. Once again, even though allowing the leadoff batter of the inning to reach base Community escaped yet another inning unscathed. Cleanup hitter and member of the infamous 2016 Vancouver Minor Bantam AA Expos, Ramos would battle Yuen and lay off some tough pitches to draw the leadoff walk. It took 2 pitches for Yuen to catch Ramos napping at 1st as the former New West little leaguer would pick off Ramos for the 1st out of bottom of the 2nd. Yuen would allow two more runners to reach base both also off walks, but induce a groundout off the bat Mudry-Lee to Crozier at second who made a tough play ranging to his left for already his third assist of the game and the third out of the inning. 0-0 after 2.

New on an 1-2 pitch would be hit by the pitch, yet again putting the leadoff guy on base to start an inning. With runners coming at a premium in this game, 9-batter Miles would execute a solid SAC bunt to move New to 2nd, but West Coast's one, two batters were unable to get the job done letting Hanning off the hook for the third straight inning. The bottom of the 3rd would see the Cardinals would fall behind the 8 ball first, Garay would hit a leadoff bloop single into RF while 10-batter Hanning would execute a SAC bunt moving him to 2nd. Unlike West Coast, the Mounties would find a way to get the run across the plate, a groundout had Garay standing on 3rd with 2 out. A 1-2 offering from Yuen was called a "balk" as Garay trotted home for the first run of this ballgame, the very next pitch Lehman would hit a liner to Crozier for the third out of the inning. 1-0 Mounties after 3.

Yuen and Crozier would hit back-to-back 2 out singles in the 4th but once again the Cards would strand their 4th and 5th runners on base as Hanning would escape the jam, a common theme throughout the first 4 innings of work. We jump to the top of the 5th where the score is still tied and with Hanning retiring the first two hitters of the inning via. strikeout it looked like Hanning was now starting to get in cruise control and the Cards were now staring at their last 7 outs. However, it would be leadoff hitter Turnbull who would battle Hanning for 9 pitches including fouling off 3 pitches when down to his last strike, Turnbull eventually would work a hard-earned 2 out walk. With everyone in the ballpark knowing with 2 out and Sugi at the plate, Turnbull was stealing 2nd the speedy leadoff hitter still took off first pitch and swiped 2nd as the ball was fractionally late to the bag. Tonight's game had many in attendance, a beautiful night for a showdown between the top 2 teams in the division, the highly anticipated matchup attracted names like Mike Kelly (BC Baseball 15U AAA Coordinator) and the Pawlicks (2016 Tri City Bantam AAA coaching staff). After grounding out to 2nd in his previous attempt on a breaking ball, Sugi would make the adjustment he needed to his third time up. With the Pawlicks, Sugi's coaches and mentors from 2016 looking on, the second-year vet sat on and connected with a 1-0 breaking ball hooking it into deep right field for a massive RBI double. Hendriks wasted no time driving Sugi in as Hendriks would also wait back on the 1-1 offering from Hanning lining the breaking ball into right-centre field scoring Sugi with ease and making it back-to-back RBI doubles from the two Coquitlam-Moody studs. Hendriks didn't stop there as #38 in camo would swipe 3rd and later aggressively score on a risky wild pitch that never left the dirt of the home plate area, 3-1 Cards after 5.

It definitely did look like Yuen was battling some control issues especially with his secondary pitches, it never seemed to faze him as #11 retired the Community side in order in the 5th, with strict orders from Yam about the 6th inning and how Yuen would only get to face Community's leadoff hitter if there was 2 outs, Yuen did just that as he retired the 9-10 batters with ease, as promised Yuen would face lefty Kahnert for the third time. With 2 strikes on Kahnert, 3rd baseman Baybay would move just to the right of 2nd base anticipating something to the right side of the diamond with pull-heavy Kahnert up, that he did as Kahnert would hit the ball up the middle straight to Baybay who recorded his first and only assist of the game. Yuen would get the handshake from Yam as despite not having his best "stuff" he battled and yet again lined himself up for the win with a quality start (6 IP, 1H, 1R, 1ER, 3BB, 5K). 3-1 Cards after 6.

The Cards padded their lead in the 7th, as Miles would leadoff the inning with his 22nd walk of the year, Fukuoka (day-to-day with a minor "upper body" injury) was called in to pinch run for Miles. Fukuoka and Turnbull (got on via. BB also) would execute a beautiful double steal, a strikeout and walk later loaded the bases for cleanup hitter, Baybay. Baybay would line the ball right back where it came from for a 2 RBI single, Yuen would then execute an RBI SAC bunt, while Crozier followed that up with a RBI infield single of his own. At this point it was 7-1 Cards and 9-batter Miles at the plate with the bases juiced and 2 outs, Hunter (1B) and Kahnert (P) would combine for a spectacular out at 1st to rob Miles of a hit and 2 RBIs ending the inning and the threat.

Suzuki (LHP) who has been brilliant lately took over mound duties for Yuen in the 7th facing back-to-back lefty hitters to leadoff the 7th. The lefty and former New West little leaguer would get the first batter, Lehman to weakly groundout to 2nd and baffle the lone 15U BC Select representative from the Mounties, Lott on 4 pitches. Despite striking out Ramos for what looked to be the final out of the ballgame, New would turf the throw to 1st as Ramos would reach on the dropped third strike. Hunter would single to right bringing up Van Gorkum with runners on the corners and 2 outs. The game would end just the way everyone thought it would, the live groundball off the bat of Van Gorkum would hit Hunter on his way to second. 7-1 Cards the final.

It took the Cardinals until the 5th to get on Hanning who was effective in this one but the third time through the order seemed to do the trick as the boys from West Coast understood what they were looking for against Hanning and finally cashed in the runners they put on base. Yuen battled control issues today but eventually settled in and found his groove we've all come accustomed to seeing, #11 picked up his team leading 11th win of the year. With the "W", West Coast not only clinches first in the Western division but clinches at least second place in this year's Bantam AAA league. However, the boys sporting the sharp white digital camos have their sights set on first in the league and will battle the same Community team for the final 3 games of their 2017 season. Bird Field hasn't given West Coast that "home field advantage" as the Cards are a puzzling and disappointing 4-4 in games played at Bird this season, they'll look to improve on that .500 record Saturday in what's looking like a heated (referring to the weather