Cardinals Not Up To The Task as Richmond Scratches Across a Run in the 9th Inning; West Coast Drops To 22-6 On The Season With 4 Games Against Vancouver Community Left On The Schedule 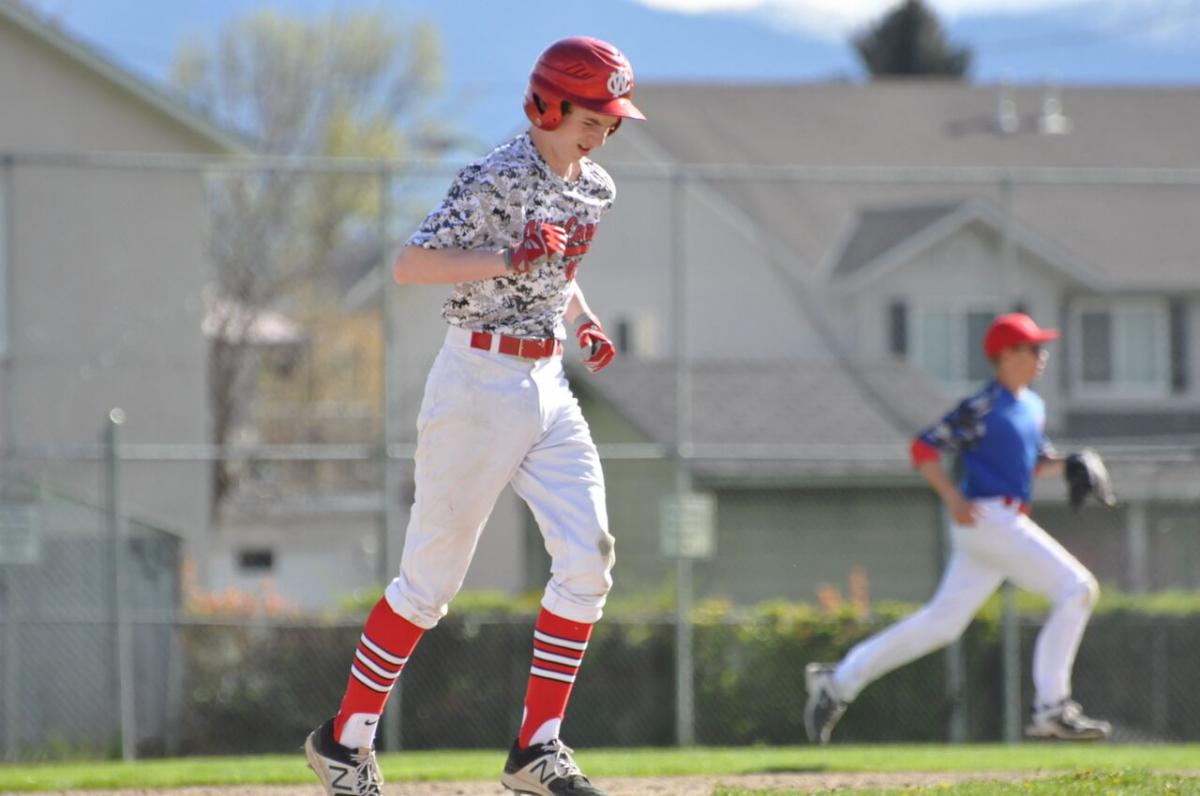 The West Coast Cardinals fell 3-4 in extra innings Wednesday at Bird Field and failed to win the season series with their divisional opponent, the Richmond Chuckers. Despite a 12 strikeout performance from Cardinal starter Kenneth Sugi, everything just seemed to go Richmond's way in this one, of note it was one botched fundamental fielding play in the 6th that ended up costing West Coast their 2 run lead. The Chuckers scratched across a run in the 9th inning from their middle of the order bats in order to salvage the win, but it definitely would not have been possible without their strong pitching and defence throughout this Wednesday night contest.

Sugi, the crafty veteran from North Vancouver got the start in this one. Sugi had made some mechanical adjustments and over the past month has learned to trust his stuff and his catcher, most importantly to not overthink when faced with the task of going through a lineup potentially 2-3 times a ballgame. He has been excellent over his last 5 outings, which includes coming off back-to-back 5+ inning starts allowing no earned runs both times out. The Chuckers opposed with an unfamiliar right-handed arm in Josh Abraham, the first year from Richmond who was excellent in his last start against Chilliwack was looking to put a halt to a Cardinal lineup that had put up 18 runs in their last two meetings with Richmond.

Sugi looked strong early on as he would retire Hikida and Hepburn on strikes but watch as a 0-0 belt-high changeup to McGill get crushed to the right-field fence for a double. 9 pitches later, Sugi would get second-year Finkelstein to pop up to Yuen at 2B for the final out. Abraham would work around a single by Turnbull in the bottom half of the 1st to keep it tied at zeros after 1.

West Coast would hit the scoreboard first as it would take a pair of 2 out doubles in the 2nd inning, 7 and 8 batters, Crozier and Powell would be the ones to execute the pair of extra-base hits as the latter took advantage of a poorly-spotted breaking ball driving it into the right-centre gap scoring the former with ease. Both starters were doing a commendable job of mixing up pitches and keeping their opposition off-balance. Richmond recorded a number of their outs thanks to hard-hit balls by Cardinal batters that found the gloves of Richmond fielders while Sugi recorded a number of his outs via. the punchout, 9 to be exact for the aforementioned Sugi after 4 innings. 1-0 Cards after 4.

The 5th inning saw some scoring for both clubs, Houston led off the 5th with a base hit up the gut, with none out and a full count on Lenihan, Richmond ran a low percentage play having Houston take off for 2nd on the full count pitch to stay out of the double play (even though Lenihan has struck out 8/14 times against West Coast coming into that plate appearance). The Chuckers struck lightning in a bottle as the first-year import, Lenihan got a hold of the full count offering from Sugi and hit it over the head of the puzzled Cardinal left-fielder to knot things up at 1s. Sugi would K back-to-back Chuckers to strand Lenihan at 3rd and end the offensive 5th for Richmond. The Cardinals would respond in their half as they put two runners in scoring position with 2 out for 10-batter Miles, Miles would jump on the first pitch he saw from Abraham and hit it softly into left-centre field scoring both runners before getting tagged out at 2nd on the same play. 3-1 Cards after 5.

With 6 outs to go and a 2 run lead, the 6th inning took a turn for the worse. Sugi would strikeout Salazar for the first out of the inning and his 12th K of the ballgame, bringing up leadoff man Hikida who would quickly fall behind 0-2 against Sugi, but three straight balls no where near the zone quickly saw it become a full count, the very next pitch was a low fastball right in the "happy zone" for Hikida as he drove a line drive shot into centre for a single. With 1 out and Hepburn now up, Sugi would catch Hikida leaning the wrong way at 1st initiating a run-down, the rundown lasted one throw as Hikida noticed no one was covering 1st on the rundown and quickly got back in time. Sugi could only look to the sky as a simple fundamental coverage that was botched by the pitcher turned what looked to be a clear 2nd out into a second life for Richmond. A wild pitch and groundout (which should have been the 3rd out of the inning) later had Hikida standing on 3rd with 2 out. A walk to McGill to put runners on the corners spelling the end of the quality start for Sugi, Yam brought in Kang to strand both inherited runners, something the big righty has done very well this season. However, Kang would turf a 1-2 curveball, Hikida scoring from 3rd on the wild pitch. With McGill (tying run) at 3rd and 2 out, FInkelstein would hit a 2-2 offering from Kang to right field, Kang could only watch as the line drive would go off Turnbull's glove in right field for a critical E9 knotting the game up at 3s after 6.

Kang would give up a leadoff single to Houston, as Yam would turn to Suzuki to work around a Houston single in the 7th and strand him at 2nd. Suzuki did just that as he would impressively strike out 3 Chuckers in a row giving West Coast a chance to win it in the bottom half of the 7th. Hetherington (Richmond's head coach) would go to Houston in the 7th as Houston would make quick work of the Cardinals for their second consecutive 3 up 3 down inning. Suzuki would retire the side in order in the 8th and try to make things happen with his bat in the bottom half. With 2 outs and Suzuki up, Suzuki would beat out an infield single, noticing that there the entire Richmond middle infield had basically ran off the field already, Suzuki made a move for 2nd but was promptly tagged out by an alert Finkelstein who had the ball right next to him, some smart thinking by Suzuki to take the open base but very poor execution on the route to get there.

With an inning to go before international rules kick in, the Chuckers would strike in the 9th as Hepburn despite recording his 3rd strikeout of the night would reach on a dropped third strike. A SAC bunt by McGill moved Hepburn over to 2nd. With one out and the go-ahead run at 3rd, Yam would turn to knuckleballer Eathan Powell to try and retire the Chucker vets Finkelstein and Houston. Powell would get Finkelstein to ground one back to him and fire a strike over to Baybay to nab Hepburn at 3rd for the 2nd out of inning. Finkelstein would swipe second and with 2 out, another low percentage play was executed by the Chuckers, Finkelstein (go-ahead run) tried to steal 3rd with 2 out as on the pitch Houston hit a knuckleball through the right-side hole scoring Finkelstein with ease who was off on the pitch. The Chuckers had now struck lightning in a bottle twice. 4-3 Chuckers after 8 1/2 innings.

Despite Turnbull's second hit of the night, the Cards just could not get it done as they fell in extras to a Chuckers team who came ready to play. 4-3 in favour of Richmond is your final.

A lot of hard contact from the Cardinals in this one, those hard hit balls unfortunately just found the gloves of fielders and sometimes that's just the way it goes. A couple low percentage plays put on by the Chuckers turned out in their favour but it was Richmond's best players that came ready to play today, Houston and McGill collected 5 of the 7 hits for them. It all goes back to two things: a botched pickoff play in the 6th inning, a two run lead coughed up because of that and poor approaches at the plate leading to an OBP of .000 for West Coast's 1,3,4 and 5 hitters combined. Tip your cap to Richmond, they came ready to play their defence most notably Hikida (LF) and Cole (SS) was flawless tonight while Abraham and Houston shut down a potent Cardinal lineup. West Coast now falls to 3-3 against divisional opponents (not named Victoria or Nanaimo) and 4-4 when playing at Bird Field. They will look to get back on the horse as they face Vancouver Community for 4 straight matchups to bang out the rest of this season's schedule.