Sugi Spins a Gem in Game 1 while Errors and Walks Prove Costly in Game 2, Cardinals Split DH with Cloverdale 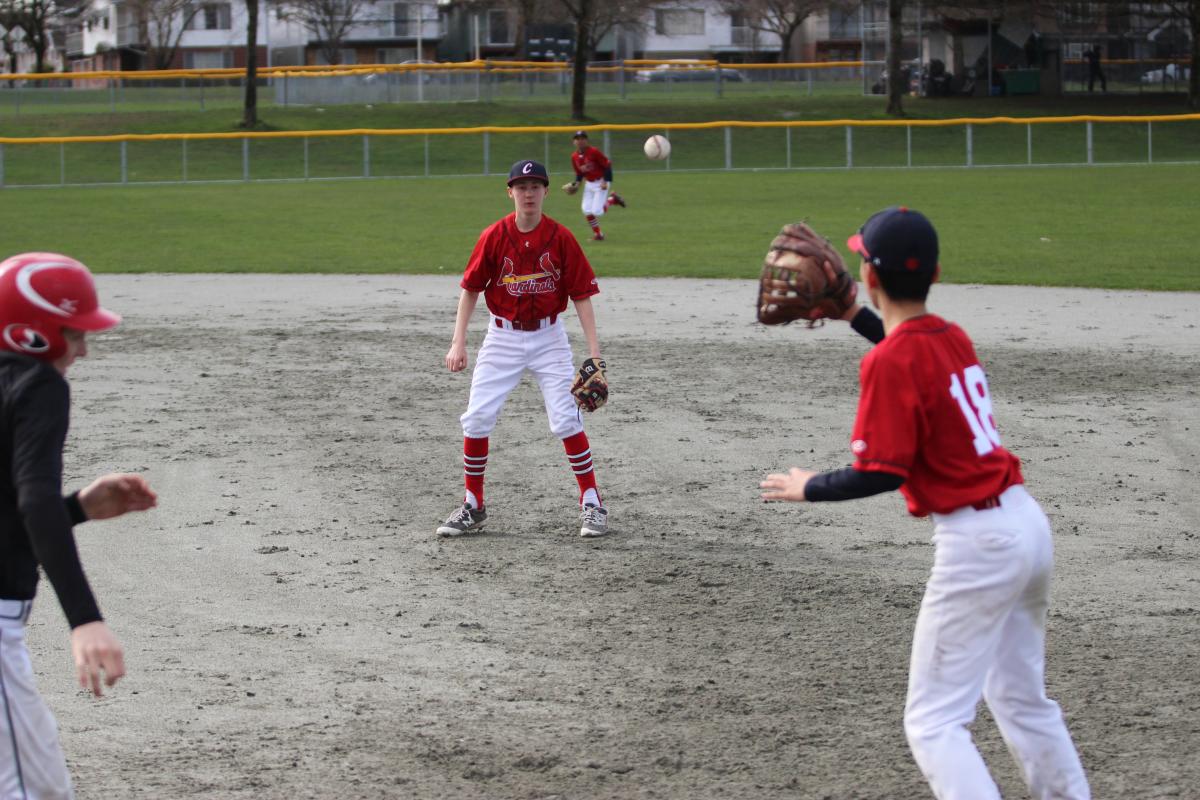 Fresh off a 4-0 start on the island, the West Coast Cardinals were itching to play Cloverdale in this season's home opener hosted at Nanaimo Park in Vancouver. The Spurs did all they could to hold down the Cardinals in game 1, Domanski looked like the sure reason why Cloverdale would take game 1 but the Cards battled and eventually turned the game around on two plays a HBP and a beautiful hit and run, Symons locked up the save helping his team take game 1 over Cloverdale by a score of 3-1. Game 2 was a hard fought war between two teams, Cloverdale battled back from an early 2-0 deficit, West Coast down to their last 2 outs, battled back from down 2 to score 3 and take the lead and Cloverdale overcame 1 run deficits in the 7th and 8th, eventually scoring the game-winning run in the 8th to win it (final score of 8-7 in favour of the Spurs), for the Cards it was a disappointing showing as walks and errors at critical times in the ballgame led to their demise. As promised here is your detailed per game breakdown:

The front end of the double-header turned out to be a heavyweight pitching duel, with Sugi starting for the Cards and Domanski dealing for the Spurs. After a quiet first inning for both teams, Cloverdale threatened in the top of the 2nd by loading the bases with a single followed by a pair of walks. Lucky for the Cards, Sugi was able to regain his command of the zone, striking out the #9 and #10 hitters for the final two outs of the inning. However, the Spurs did take a 1-0 lead in the 3rd by cashing in a lead-off walk with a pair of sacrifice hits. The pressure was now on the Cards’ bats to respond, who were struggling to get anything going against the Spurs’ ace, managing just a single base-runner in their first three at-bats while striking out six times. A scary hit by pitch from delivered from Domanski to Miles shocked everyone in attendance, a 2-0 fastball that rose up and caught Miles high giving West Coast their first base runner and a sense of urgency for the batters. The aforementioned HBP seemed to spark the Cardinal offence as Sugi helped his own cause by leading off the bottom of the 4th with a single, then going 1st to 3rd on an immaculately executed hit-and-run by Yuen hitting right behind him. Clean-up hitter Baybay took care of the rest by driving in the tying run with the team’s 2nd hit of the game. Then in the 5th, Sugi stepped back in the box looking to put the Cards ahead after two consecutive walks to Suzuki and Turnbull. Once again, the loyal Coquitlam-Moody veteran delivered, plating Suzuki and advancing himself and Turnbull into scoring position. Turnbull would be retired for the second out of the 5th on a failed squeeze attempt, but Sugi would later score on a wild pitch to give the Cards a 3-1 lead. Despite some early trouble, Sugi settled in nicely on the bump, turning in six complete innings while striking out seven and allowing only one infield base hit. Symons took over in the 7th and gave the Cards and early scare by drilling the lead-off hitter with his first pitch. Thankfully, he was able to bounce back to sit down the next three batters and pick up his first save of the season as the Cards remained undefeated for the time being.

The back end of the double header pitted the first-year Burnaby resident Max Yuen against Cloverdale's Patterson. With Cloverdale losing game 1 by a tight 3-1 score, the Spurs were determined to get back on the horse in this one. However, it would be the Cardinals who would strike first, in their first at-bats this time as the away team would see Sugi score the first run of the game thanks to a successful steal of home. With a 1 run lead Yuen would retire the Cloverdale side in order on 9 pitches in groundball fashion. The second inning saw West Coast back on the attack as the first three hitters led off the inning with 3 straight base hits to load 'em with none out; it would a disappointing inning for the Cards as they only were able to score a single run to make it 2-0 after 2. With a 2-0 lead, the Cardinals took a step back and let the Foerster's Spurs take it to them, the team wearing their black dri-fits would crawl back to tie the game on a flyball error by the Cardinal left-fielder and take the lead the very next batter with an RBI single. With the score 3-2 in the 5th and the Cardinal offense nowhere to be seen since the 2nd inning, it would be the veteran clean-up hitter, the returnee from last year's Vancouver Minor Bantam AAA Expos, Thomas Baybay who would create the spark the Cardinals needed. With 2 outs in the 5th, the Spurs wanted nothing to do with Baybay and his powerful bat so they issued a walk to #13. Baybay would make the Spurs pay by stealing 2nd and 3rd in a span of 4 pitches. A walk to the #5 batter, Powell would set up a perfectly executed steal of home by Baybay to knot the score up at 3s.

The bottom of the 5th saw the Spurs re-take the lead as a bases loaded 1 out situation forced Yam to go with Symons to face Vulcano with the LH stick of Domanski looming on deck. Yam gave Symons the task of one batter and then he would go with the lefty Suzuki to face Domanski, Symons would execute a perfect outside fastball that got Vulcano to roll over to 3rd base, with the infield in it looked like a sure 5-2-3 inning-ending double play but a bobble and a subsequent overthrow gave the Spurs two free runs to put them up 2 after 5. We now jump to the 7th, as the Cards are down 3-5 with 3 outs to go, the crafty and cunning Sugi got the squad going with a single, Yuen followed that up with a single himself, both players advanced 80" thanks to a wild pitch as the Cards now had the tying run standing on 2 with none out and their 4-stick Thomas Baybay up. Foerster and his Spurs wanted nothing to do with Baybay so they opted to face Powell instead with none out and the bases loaded, Powell would draw a bases-loaded walk pulling the Cards within 1 run. What happened next no one expected, Sawyer would uncork a wild pitch which would score Yuen easily (knotting the game up at 5s), Baybay then tried to catch the Cloverdale defence napping by stealing home on a throwback from the catcher to the pitcher after the wild pitch but a forceful tag was put on him before he could reach the plate, Powell then tried to go 1st to 3rd while everyone's attention was on a fallen Baybay, an errant throw by the catcher into LF scored Powell as the go-ahead run would score all the way from 1st base and all it took was one wild pitch. Fukuoka would be tagged out at home trying to score on a wild pitch to end the inning as the exciting inning now had the Spurs down to their last three outs.

A 1 out walk to Cloverdale's 10 batter, Jung had the Spurs in business again, a walk and single now had bases loaded with 1 out, the winning run in scoring position. Jung (the tying run) would score on a pass ball, but Hendriks would strand the bases loaded and the game-winning run at 3rd by striking out the Rowe for the second out and tagging out Sandes at the plate trying to take home on a wild pitch. 6-6 after 7.

The top of the 7th saw lead-off hitter Turnbull get on via. BB, Sugi would lay down a perfectly placed bunt as an errant throw by the pitcher had Turnbull standing on 3rd and Sugi standing on 2nd with 1 out. However, with the Cardinals middle of the order up they were only able to score a single run thanks in part to a wild pitch putting them up 1 after 7 1/2 innings. The Spurs would not go down without a fight as they took advantage of an amped up West Coast team they waited out the balls thrown out of the strike zone as the Cardinal closer issued 3 straight free passes to lead off the inning, it would be Cloverdale's 8-10 hitters who finally put the nail in the coffin as back-to-back bloop singles into no-man's land scored the tying and game-winning run.

Game 1 vs. Cloverdale showed the first time this season where the team had to face real adversity against a true ace of a staff, the Cardinals handled it well and eventually took a win from a scrappy Cloverdale squad. Game 2 was disappointing as errors and walks at key times in the ballgame led to their eventual demise, however the season is early and it was a reality check for a squad that was rolling to start the season. The team based out of Vancouver and Coquitlam are now off to Kamloops to face similar to better competition in this year's BLE Best of the West Spring Classic. Good luck to all teams and safe travels!