Baseball is the sport with the most colourful history and lore of any sport. It is also blessed with the most delightful culture of slang words. If you're going to play for the Vancouver Mounties, you've got to learn to walk and talk like a baseball player.

As Yogi Berra always said, "In baseball, you don't know nothin'." He also was known to say, "You can't hit and think at the same time," which is true. This is the same guy who, when someone asked him what time it was, said, "You mean now?" Ah, Yogi... who when asked about a popular New York Restaurant, said, "That place is so crowded nobody goes there anymore." When asked for his hat size in spring training, he said, "Don't ask me now; wait 'till I get in shape." It was Yogi who said, "Ninety-percent of this game is mental, and the other half's physical." He also said, "It ain't over 'til it's over," the classic baseball saying. By the way, parents are encouraged to learn at least a few words from the list. there won't be a test, but if, when talking to the coaches, you can slip in one or two of these words, the coaches will likely take what you say half seriously, as long as you're not looking to start a rhubarb or throw is a charlie. Thanks to Doug Lang for putting together a starting lineup of terms.

For a more complete list of terms, have a look around for Paul Dickson's The Dickson Baseball Dictionary originally published by Facts on File in 1989.


Alley - The section of the outfield between the outfielders. Also referred to as the "gap."

Around The Horn - from pre days, when ships used to go the long way to the West Coast, "Around The Horn" of ; so in baseball, having it around the bases after an out is still called this.

Atom Ball - a ball hit hard but right at a fielder, as in right atom.

Chop - A ground ball that hits in front of home plate (or off of it) and takes a large hop over the infielder's head.

Bang Bang Play - A play in which the baserunner hits the bag a split-second before the ball arrives or vice versa.

Baseball Gods - Former baseball greats in Heaven that often manipulate the outcome of a Baseball game. As much as we all think the games are won and lost on the Diamond. The Baseball Gods have strange powers and all teams that win need a little help from them.

- Pitcher and catcher considerd as a single unit, coined from the military sense of the term artillery battery. It also suggests a play on words, as it's activities center on the battery.

Bottle - To contain an opponent; to bottle a game is to win or make certain of winning it. Such as when the Mounties scored 12 runs in one inning against the West Richmond Royals on .

Bronx cheer - When the crowd boos. Originating from the hostile crowds at Yankee stadium.

Bullpen - Believed to have originated in the Carolina League. In , they had a bull painted on the fence advertising tobacco, and relief pitchers (who used to warm up behind the outfielders) would be said to be in the Bullpen.

Can Of Corn - In old-time grocery stores, they'd stack the cans in a high pyramid and when you wanted a can, the storekeeper would use a stick to tip the top can into your arms. So an easy pop-fly catch is known as a can of corn.

Catbird Seat - To be in the catbird seat is to be in first place.

Caught Looking - When a batter is called out on strikes.

Cheese - A good fastball, with holes in it, hard to connect with squarely. Dennis Eckersley (baseball's original save master) called himself the "Cheese Master".

Chin Music - A fastball thrown high and inside, close to a batter's chin.

Cup of Coffee - When a player is called up from AA to AAA for a game, he's said to have come up for a cup of coffee.

Downtown - The area behind the outfield fence, as in "he hit that ball downtown".

Emery Ball - A ball scuffed by emery board. Tom House had a scar on his catching hand. When he was asked what it was, he said it's the scar left by the crazy glue he used to attach the emery board to his hand before every start. A scuff on a baseball caused it to move more, by increasing the aerodynamic drag on that part of the ball.

Fireman - A relief pitcher, especially one who comes in to pitch with runners on base and gets his team out of the innng.

Goat's Beard - The flap that hangs from a catcher's mask to deflect balls that are going for his throat.

Gopher Ball - A fat pitch that the batter hits for a homerun.

Gunk Ball - Whitey Ford of the Yankees (most world series wins in history) had a concotion of "gunk" which he put under his crotch when he pitched. Umpires will check everywhere except under a pitcher's crotch, is the theory. He'd put gunk on one side of the ball to increase its sink and tail. He kept this gunk in a roll-on deodorant can. Yogi Berra, Fords teammate, was famous for using other player's deodorant. Mickey Mantle put Whitey's "deodorant" outside the shower room one night. Yogi rolled Whitey's gunk on. Yogi's real hairy. The gunk included some very sticky substances. Yogi's arms got stuck to his sides. The team trainor had to use a razor to cut Yogi's arms free from his body.

- An infielder who sucks up everything hit near him.

Hose - A players arm, espeacially if he has a good one that shoots the ball out like a blast of water ( fire hose ).

Hot Corner - Third base, because of the many lasers hit that way

Hum Babe - this is a real beauty... it doesn't mean anything, it's just something to say to make noise until you think of something better to say. Can be used in variation with Haw Now, as in "Haw Now, Haw Now, Hum Babe, Hum Babe, Haw Now, Hombibbie". See "Bull Durham" for some great examples of guy's practicing the art of the hum babe.

Ice Cream Cone - A catch made with the ball half out of the top of the glove, so it looks like a scoop of ice cream.

Ivory - A rookie, as in a precious and sought-after commodity.

Matador - A fielder who jumps to the side of a ball at the last moment.(OLE!)

Mustard - A real zesty fastball, a pitch with lots of velocity and movement

Peas - What a good fastball looks like to a batter, the size of a pea.

Peggy Lee Fastball - Old slang for a fastball that isn't fast, as in "Is that all there is?," which is a song that Peggy Lee made famous.

Provincial Draw - The Tournament schedule that everyone is eager to get but no one is ever happy with!

Pull A Casey - To strike out.

Rabbit/Turtle - A baseball term derived from a mother goose story "Tortoise and the Hare" meaning a Rabbit is a fast runner, and a turtle is a slow runner.

Radio - A fastball, so fast that the batter could hear it, but could't see it.

Rhubarb - An argument, usually between an umpire and a coach over a bad call.

Riding the Pine - Sitting on the bench, as in "if a pitcher insists on walking batters to set the table, he can expect to ride the pine.

Rock - To commit a rock is to make a boneheaded play mentally, as in throwing to the wrong base.

Ruthian - With great power, in reference to the King of Swat, Babe Ruth.

Seeing-Eye Single - a roller that somehow finds its way between two infielders.

Smoke - A good fastball, where smoke rises from the catchers mitt.

Southpaw - A Player who throws with his left arm. In baseball's early days, most parks were laid out with home plate on the west side of the field. The lefthanded pitcher's arm would thus be facing the south side of the field. Does that make righthanders "northpaws?"

Sweet Spot - The part of the bat just a few inches from the barrell.

Table Setter - Batter whose job is to get on base for other hitters to drive him in. Usually a leadoff or No. 2 hitter.

The Garden - The Outfield, as in "any winning team needs three good gardeners".

Wheelhouse - The area of the strikezone where a batter is most apt to drive the ball a long way, i.e. waist-high on the inside half of the plate.

Wheels - A player's legs or footspeed, if he has wheels he's a speed merchant (Rabbit). 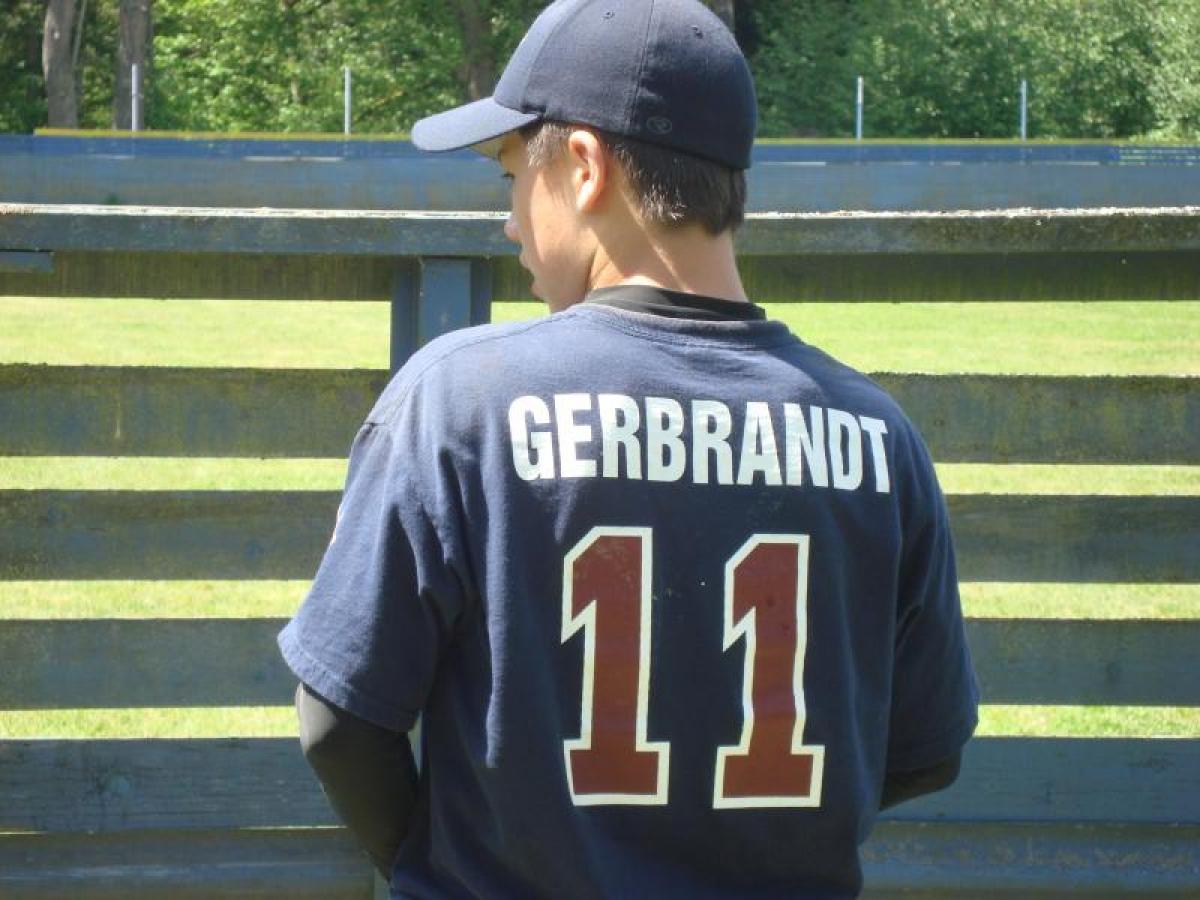