Once a year in New Prague, it's old, cold, very intense football - A grand old tradition was carried on Saturday without the grand old drifts. Since 1960, they've played a winter football game.

Under a disappointingly blue sky - no shock-absorbing snow in sight - Polars clashed with Ptarmigans again Saturday in the 40th annual New Prague Sno-Bowl .

It was full-tackle football, without pads, though more than a few players had insulated themselves against the cold with pre-game stops at the City Club and Simon's Bar.

Dick Jankowski, 56, played in the first Sno-Bowl , and he describes it with the stentorian reverence of a Keith Jackson - or at least a college public-address announcer, which Jankowski is for the Minnesota Gophers.

"There were eight of us," he said. "It was Dec. 26, 1960. We were watching the Eagles and the Packers in the NFL championship game. There was snow on the field in Philadelphia that day, and the Eagles won, 17-13.

"At the end of the game, somebody looked outside and said, `Jeez, what a beautiful day! We should see what it's like to play football in the snow!' "

They had only four players to a side. "Then in '61, we had about 30 guys," Jankowski said. "It continued to get bigger and bigger."

The only qualification: You had to have graduated from New Prague High School. It helped if you had played football there.

"We played one year on an inch of ice," said Greg Sticha, 27, for five years co-owner of the Ptarmigans. "One year, we had snow up to our knees."

The game always had been played the weekend after Christmas, but it was moved up this year because Christmas falls on a Saturday. That froze out Todd Scheffler, who hadn't missed a game since 1983 but was stranded by work in England.

"The good news: I had told my wife that this would be my last year," Scheffler said by telephone. "But now I get a reprieve; I can play next year. And I get another year for my body to heal from last year."

In 1984, on the 25th anniversary, the game was augmented by a parade featuring the school band, fire trucks and floats, one carrying the Sno-Bowl queen.

"That was my brother Alan's wife, Karen," said Bob Vanasek. "We did that so he could play that year. She wasn't going to let him."

Bob started playing in 1967. In 1970, he bought the Polars from brother Alan. Brother Rick owned the Ptarmigans then.

"The NFL noticed our success and decided to hold their own Super Bowl," Bob Vanasek said. "We were first. For a couple of years, they competed with us - they played on the same Sunday. Then they decided to move their date to the end of January."

The last time he played, except for token old-timer appearances, was 10 years ago.

"I was playing outside linebacker, and the guy I had to guard was a starting right end for the St. Thomas Tommies," he said. "He was good, but he learned something about Sno-Bowl rules that day. When he came out to run his pattern, I just grabbed his belt and held on. I never got flagged for interference, either. The ref understood."

Rock Nicolai has been head referee every year.

"He used to run a 3.2 bar in town," Vanasek said. "That's where we went after the game. One year, there was some trouble when some ice fishermen came in and sunfish were dropped into pitchers of beer, and . . ."

Vanasek served in the Legislature for 20 years (that's where he learned to let some things remain unspoken), including 4 1/2 years as House speaker.

But he never was tempted, he said, to steer public money toward, say, a domed stadium for New Prague.

"We appreciated the aesthetics of playing outdoors," he said, chin jutting. "The weather adds to the allure of the game."

Jankowski played in 25 games - until his ribs started cracking.

"Some of those young guys, their competitive juices get flowing and they really come after you," he said. "We've had dislocated shoulders, a broken collarbone, a dislocated hip, broken fingers and noses.

"Nothing major, though. Just nuisances."

Pete Sticha, 21, and brother Pat, 24, both still close to prime playing condition, were at Simon's Bar before the game, looking forward to hitting some of the older fellows.

His brother sipped from a can of beer. "Game preparation is a little different from high school, though," he said.

Jankowski and about 15 other players are enshrined in a hall of fame, and players name a most valuable player each year.

"Never won MVP," Jankowski said. "But I won the `goat' award once. I intercepted a pass and was running for a touchdown to win the game, but I fumbled."

The game has featured some legitimate athletes, including Rick Vanasek, now a doctor in Northfield, Minn., who was a star quarterback, and Harold Stevens, a Lakeville teacher who was an all-state halfback when New Prague won state championships in 1973 and '74.

"You could tell that he was a cut above the rest of us," Jankowski said.

What did they pay for the team?

Vanasek and Bill Kartak were rival owners in 1978, when they were roommates at the University of Minnesota. "We made our player draft on Thanksgiving, and we didn't talk to each other again until after the game," Kartak said.

Ownership also involves making yard markers out of baling twine and wood and taping numbers on jerseys. If there's snow, the field crew - whoever has the best snowblower - clears the end zones.

The Polars lead the series 21-14, with five ties. The Ptarmigans - named for a bird that lives in harsh climates - won last year.

Nearly every game features one "sleeper play," with a player sneaking in from the sidelines.

"Every year, it has an impact on the game," Scheffler said, "but there's never an argument about it. At the start of the game, Rock always asks, `OK, gentlemen, is the sleeper play legal this year?' And we always say it is."

Hall of Famer Jankowski talks wistfully of the old days.

"There hasn't been quite the hoopla in recent years," he said. "Some of the younger kids, the ones who've been out of school for just five or six years, they don't get into the afterglow of the game quite as much as we did."

That's true, Greg Sticha said. "They used to get pretty wild, but not so much now due to law enforcement."

But it's still enough to draw aging athletes back for one more stab at glory, Vanasek said.

"New Prague likes its traditions," he said. "This demonstrates that all these alumni are proud they went to school and played sports here.

"The town is grateful, though, that some of the post-game celebrations have been toned down."

In 1964, Dick Jonckowski was standing outside Williams Arena, trying to figure out how to get in to watch his beloved Gophers, when the Michigan team bus pulled up. The great Cazzie Russell stepped out.

Jonckowski asked, "Mr. Russell, do you mind if I carry your bag?" Russell said, "Who cares?"

Jonckowski did. He carried the bag all the way to the Michigan locker room, then sneaked behind the Wolverines bench and stayed there all game.

As he grew up, Jonckowski found a more reliable way to access Gophers games for free. Williams Arena, which celebrated its 81st birthday last Wednesday, has featured just two public address announcers in its history. The first was Jules Perlt, who retired in the mid-1980s. The second is Jonckowski, the self-styled "Polish Eagle," who has worked the mike at Gophers basketball and baseball games since 1986 and spent 10 years working Gophers football games, all the while relishing his prime location and access to successive generations of Gophers athletes and coaches.

Athletes leave or retire young and coaches get fired. Our sporting fixtures so often are the people behind the scenes, or behind the mikes.

"I remember listening to Julie, and he had such a distinct voice," Jonckowski said. "He had a nasal tone. He'd call out, 'McHaaaaale!' I used to imitate him all the time. We'd play our back-yard games, and I'd pretend I was doing the public address."

Some kids dream of game-winning shots, others of introducing the starting lineup. Jonckowski, 65, has fallen into the latter category ever since -- as a kid growing up in New Prague -- he started finding his way into local sporting events, like a Forrest Gump with a home-run call.

In the late '50s and early '60s, Jonckowski became a Boy Scout usher at old Memorial Stadium and in Williams Arena. His father's cousin was in charge of the Boy Scouts, and once he discovered his relative, he gave Dick a prime assignment -- working behind the bench. Thus, he found himself with up-close-and-personal access to the Gophers' two Rose Bowl teams.

"And in basketball, I usually had a place close to the floor," Jonckowski said. "I had a good deal."

He made $60 a week in public relations for the Muskies and Pipers in the American Basketball Association, where he worked with Bob Casey, who would become the legendary misspeaking Twins announcer. "Bob gave me a lot of advice," Jonckowski said. "I always wondered if he made those mistakes on purpose."

Jonckowski even worked as a head field usher for the Vikings in the '60s and '70s. "They put me on the field, and I was kind of a hot dog," he said. "So somebody said, 'Let's put Dick's name on the back of his jacket, with three stars.'

"Bud Grant used to go crazy, saying, 'Jonckowski is in all of our game films.' I caught 112 field goals in 17 years, and seven passes that were thrown out of bounds. That was a great deal for me, because everybody knew who I was from those crazy days."

Jonckowski emceed numerous Gophers charity events for former athletic director Paul Giel, and when Perlt retired, Giel told Jonckowski he would be a leading candidate to replace Perlt. When Jonckowski struck up a friendship with Clem Haskins, he pushed for Jonckowski and the rest is Williams Arena history.

Jonckowski is ebullient by nature. He began his career in radio, but after working "for an alcoholic" in Ladysmith, Wis., he returned home to work at KSMM (AM-1530) in Shakopee. When the station went to a religious format, Jonckowski became a guest speaker and emcee, offering the motto "Laugh and Live Longer." "I've done 30th birthday parties, mock weddings, bowling banquets," he said. "Whenever they need somebody, I can fill the bill."

He does laugh a lot. He used to tell jokes to Haskins before Gophers games. After developing the same relationship with Dan Monson that most people in Dinkytown had -- nonexistent -- he began telling jokes to Tubby Smith before games, to "loosen him up."

The first: "I told Tubby before his first game, 'My wife ran away with my best friend, and man, do I miss him.' Just crazy stuff like that. Tubby will come over before every game and say, 'Give me a quick one.' I try to make him laugh, help him relax."

He knows his role. 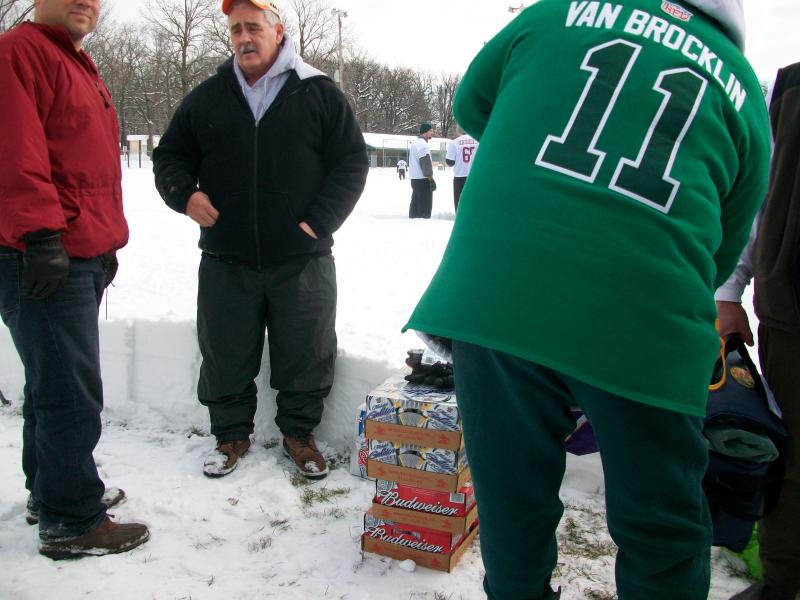 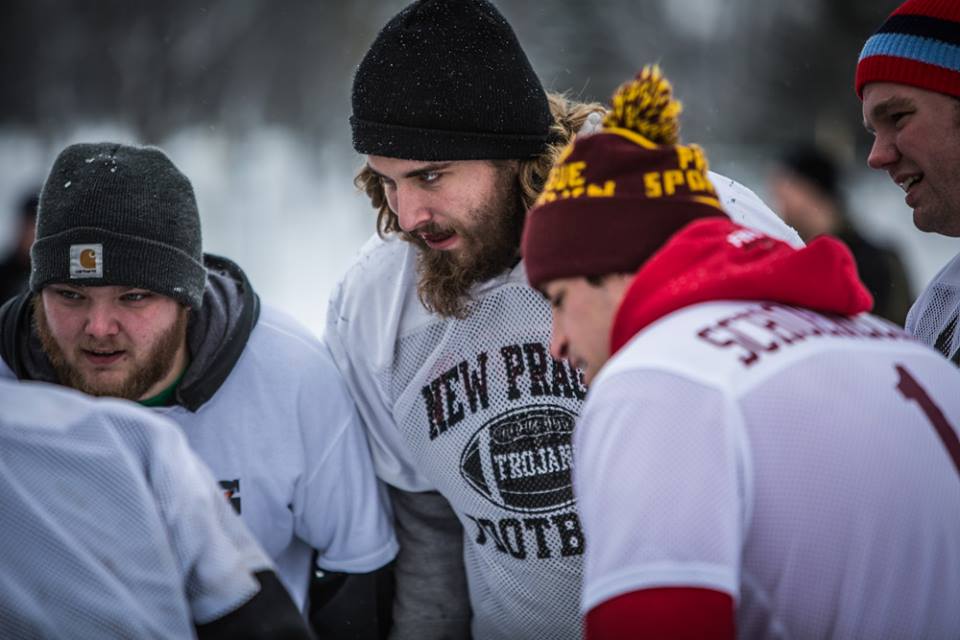 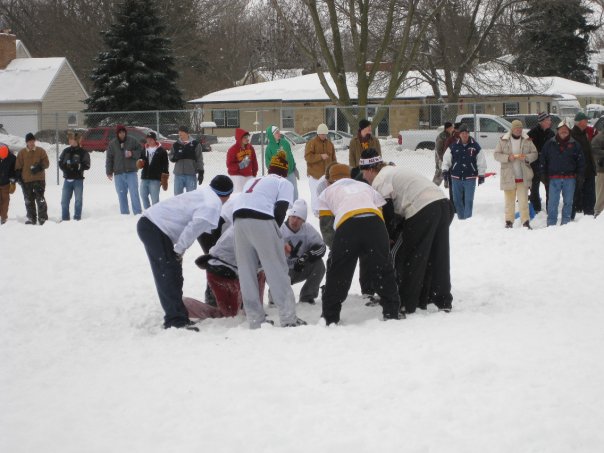 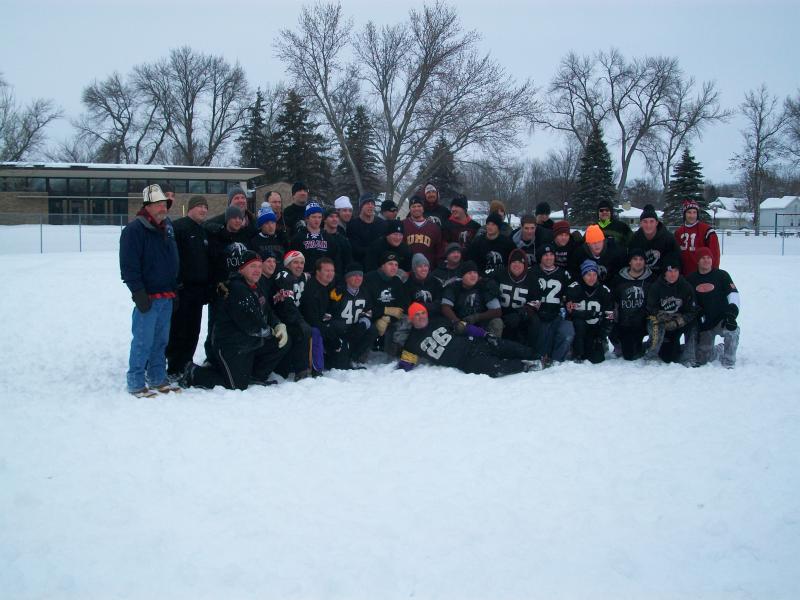 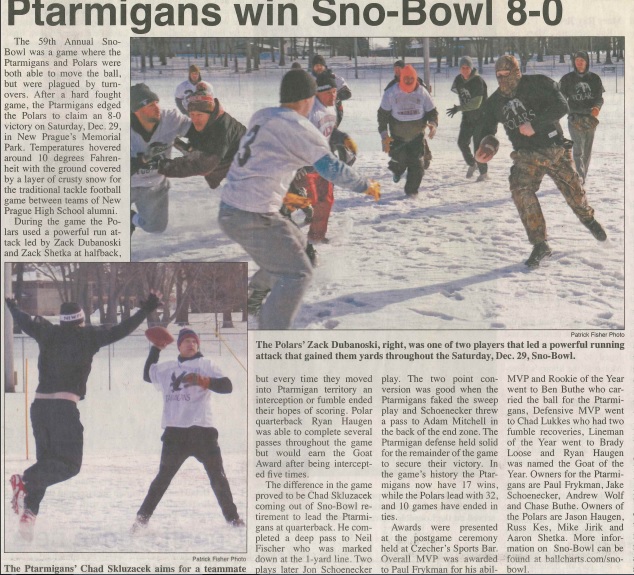 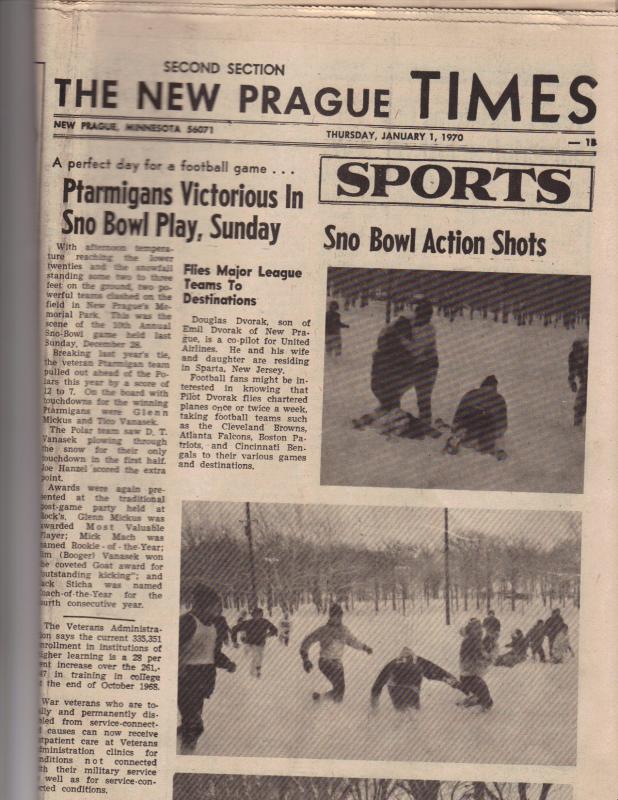 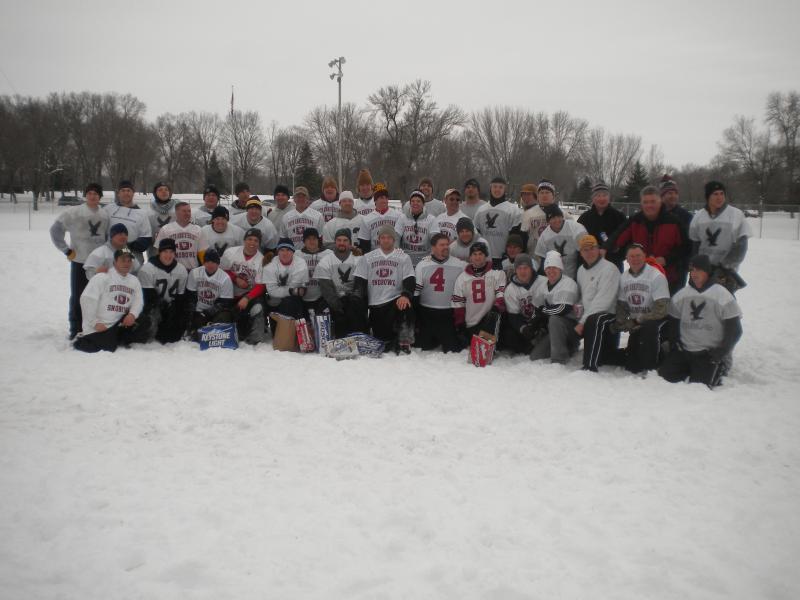 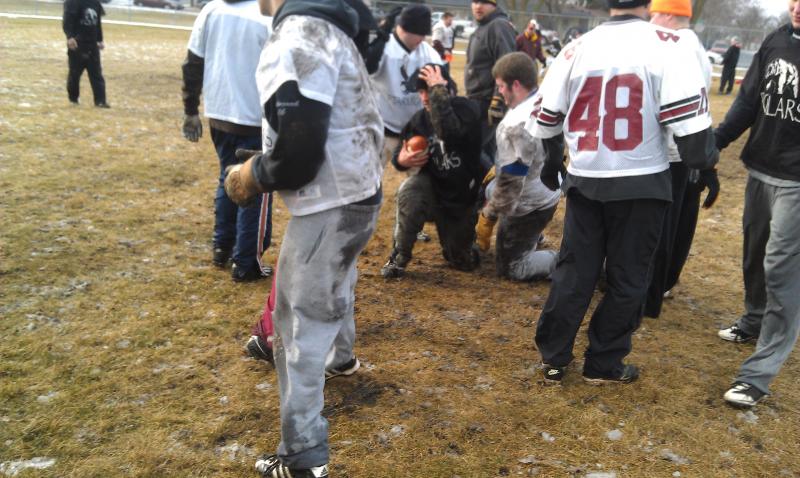 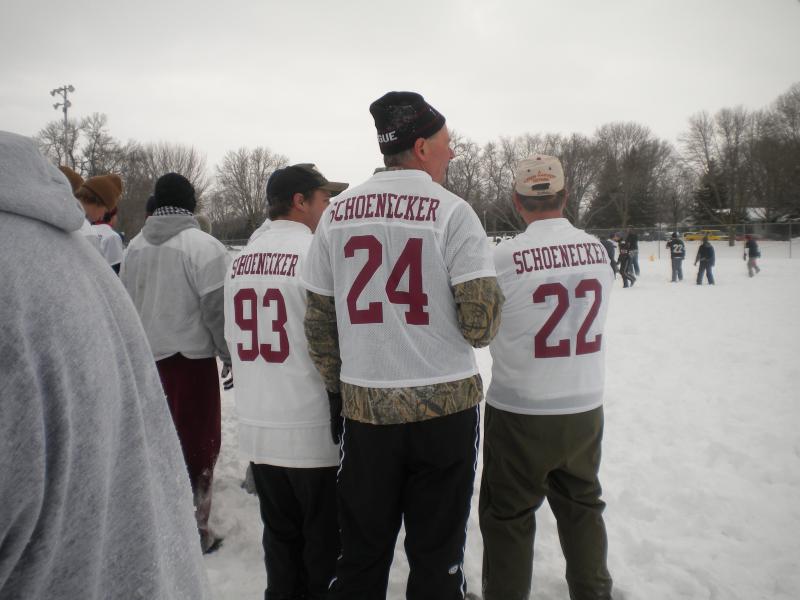