Way to go Lauren Harrington, congratulations on being named The Chronicle's All-Greater Houston Girls Player of the Year:

Spartans clinch 3rd District title in 4 years with win vs. Morton Ranch to close out district schedule. Congratulations ladies on an undefeated record in district play!

District race going down to the wire:

With the district lead on the line Spartans are set to match up against Cinco Ranch:

Spartans maintain undefeated district record after kicking off second round of district play: 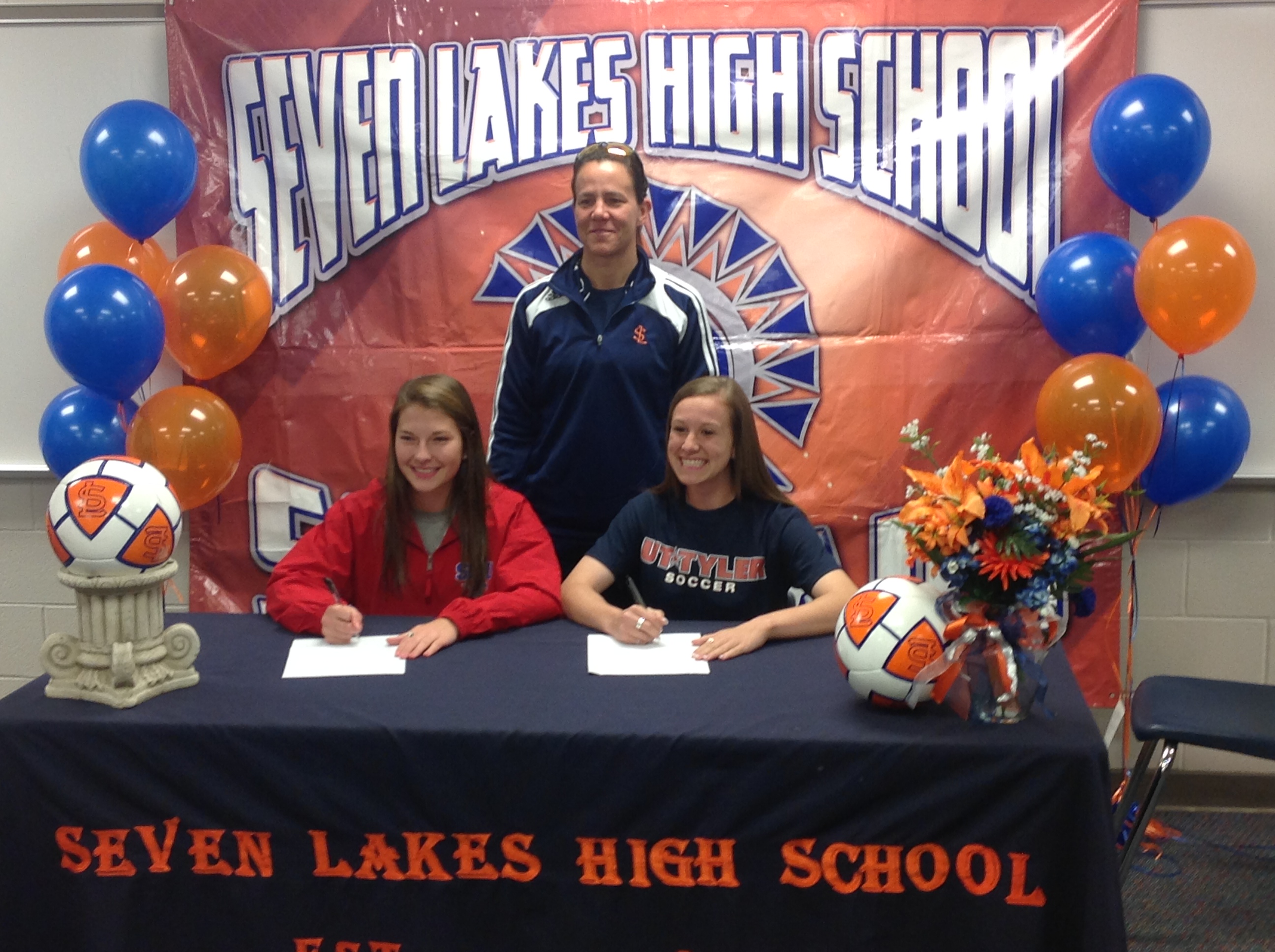 For more signing day photos please click on Photos and the 2014 Signing Day album or the following link:

Seven Lakes gears up for another tough district schedule:

Spartans wrap up an undefeated opening weekend with a 4-0 win over The Woodlands in the Lady Highlander Tournament:

Seven Lakes soccer kicked off the 2013-2014 school year and soccer season with its fall party; photos from the celebration can be seen on the following link:

Congratulations to our Spartans alumni for garnering collegian pre-season awards! College Sports Madness has recognized Shaneese Spratt as a First Team SWAC All-Conference Selection while Kylie Hambleton and Kelsey Gomez were selected to the second team in their conferences the Southland and Ohio Valley Conferences. More below:

Spartans season ends in shootout after a hard fought game vs. CyFair:

Seven Lakes to take on CyFair in Area Round of UIL State Playoffs, to see match ups for all Katy ISD teams click on the following link:

Follow Seven Lakes and other area team in the 2013 UIL State Playoffs:

As one of only a handful of upperclassmen on the 2013 Seven Lakes roster, Lauren Harrington steps into leadership role:

No. 8 Seven Lakes opens the I-10 Shootout with a tough match up vs. No. 5 in Austin Westlake:

I-10 Shootout field once again will represent some of the best girls soccer teams in the state,

Seven Lake's accomplishments for the 2012 season as covered in VYPE Magazine, view your Spartans on pages 6 and 43.

Spartan's down San Antonio Churchill 3-2 to advance to State Final vs. Plano West, game coverage at Katy Times, Chron and The Rancher.

The Spartans downed Clear Lake in a shootout 1-0 to advance to the next round of the 2012 UIL State Championship Playoffs in Georgetown, TX.  Additional coverage of the regional final can be viewed on the following links The Rancher, Katy Times and Houston Chronicle. 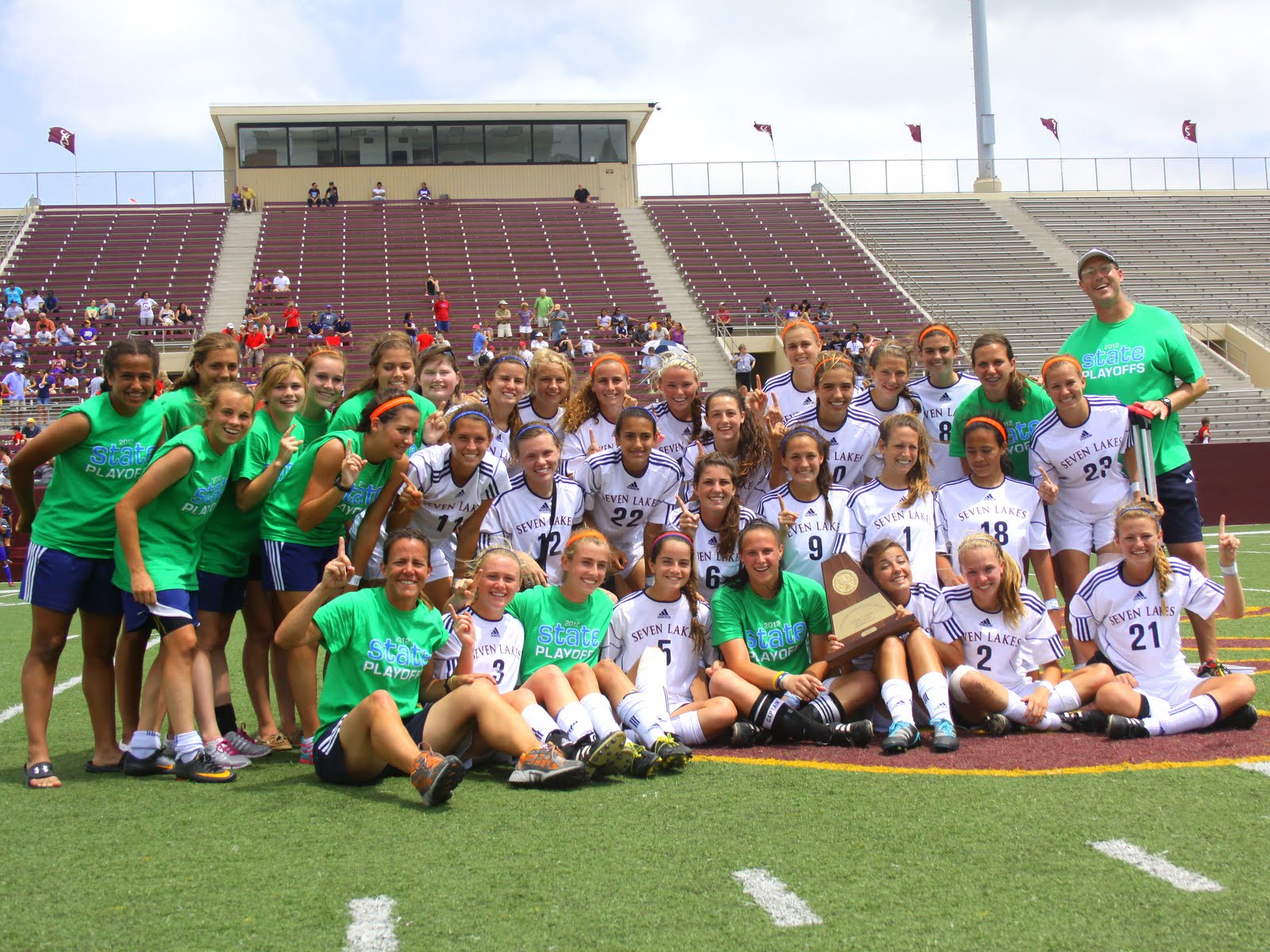 Seven Lakes defeats Clements 2-1 in a hard fought game to advance to the Regional Final for the 4th consecutive year, for game recap click the following links Katy Times, The Rancher and Houston Chronicle.  Tomorrow the Spartans will take on Clear Lake to determine which team will represent Region III at the 2012 State Tournament.

The Spartans secured a spot in the 2012 State Playoff Regional Semi-Finals with a 2-1 victory over Memorial.  It was the third time the two teams met this year and like the other matches it went down to the wire, click on the following link for additional coverage The Rancher.

Seven Lakes defeated a feisty Jersey Village team 5-0 to advance to the Regional Quarterfinal Round of UIL State Playoffs to view additional game coverage click on the following link Katy Times and The Rancher.

It's playoff time and 19-5A girls soccer teams look to impress again OUTLOOK.

Seven Lakes downs Houston Milby 6-0 to advance to the Area Round of State UIL Playoffs, additional game details can be viewed by clicking on the following link 1st Round Win.  Seven Lakes awaits the winner of Houston Aldine vs. Jersey Village to determine their next opponent.

Spartans secure sole ownership of the 2012 District 19-5A Championship with a 4-0 win over Taylor. 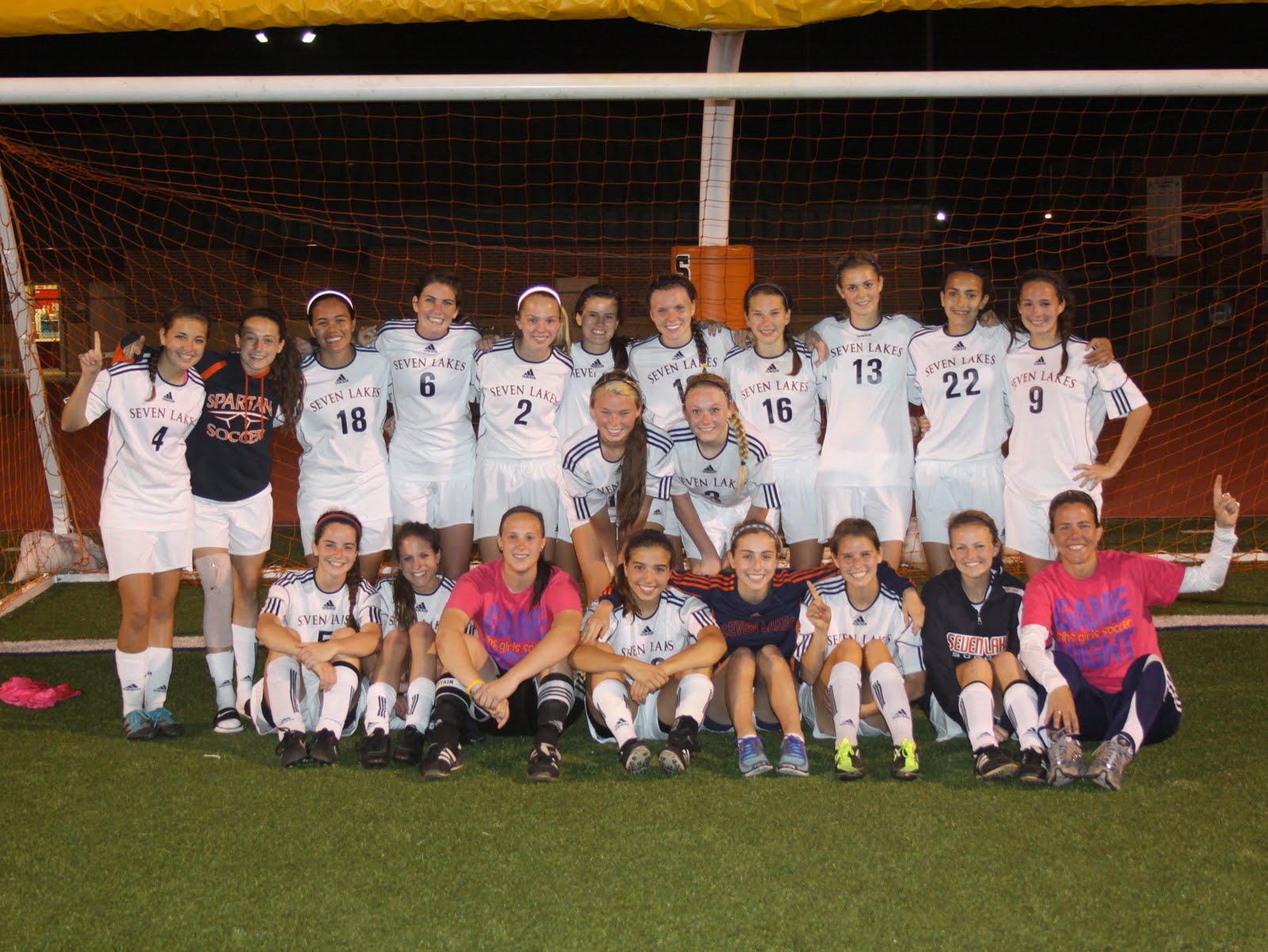 ALSO, CONGRATULATIONS TO THE JV ORANGE AND JV BLUE TEAMS ON GREAT SEASONS! JV ORANGE FINISHED FIRST IN DISTRICT WITH ONLY ONE LOSS DURING THE YEAR AND AN OVERALL RECORD OF 16-1-3.  JV BLUE FINISHED IN SECOND PLACE WITH A DISTRICT RECORD OF 6-2-2. WAY TO GO SPARTANS!

Seven Lakes secures 1st seed for playoffs with their win vs. Memorial.  However 2, 3 and 4 are still up in the air and will be determined based upon the outcome of games during the final night of district play article.

Congratulations Spartans!  Back to Back District 19-5A Champions!  Seven Lakes secured at least a share of the 2012 District 19-5A championship Friday night with a 4-1 victory over district rival Memorial, additional game coverage can be found on the following links The Rancher and Katy Times.

Playoff races are in full swing! Tuesday night's results clutter the standings in a 4 way race for the district championship and positioning heading into UIL state playoffs http://www.yourhoustonnews.com/ranch/sports/girls-soccer-katy-taylor-seven-lakes-wins-shake-up-standings/article_d9d5a504-737d-11e1-bd6f-001871e3ce6c.html

Congratulations to the four Seven Lakes Spartans who signed National Letters of Intent on to play D1 College Soccer: 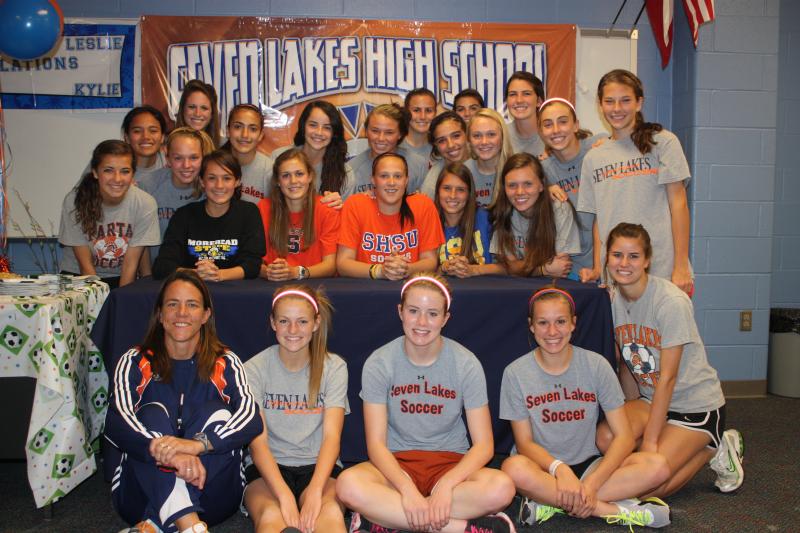 Seven Lakes and Austin Westlake fought to a 1-1 tie in regulation with Westlake advancing to the next round in the championship bracket after advancing in the shoot out by a score of 2-1 .  The Spartans next took on San Antonio Johnson where they advanced to the consolation championship with a 1-0 victory.  In the consolation championship the Spartans were unable to convert on their opportunities and lost to a strong CyFair team 1-0.  Next up Foster at SLHS, Monday January 23rd.

Seven Lakes prepares for tough competition in the I-10 Shootout hoping to build off of last year's success:

Parents & fans of Seven Lakes soccer, the program is fortunate to have several dedicated photographers who are taking pictures during games for our 2012 season.  George Racine is assisting for the varsity and Kevin Goode for JV Orange.  Links to their photo albums can be accessed via the Photo Link tab or by clicking on the following hyperlink Photo Links.

Spartans begin 2012 season by winning the 5A bracket at the Brenham Invitational Tournament. Seven Lakes opened the season with a 5-0 win over Cy Lakes, and then followed with wins of 6-1 over Stoney Point and 1-0 over Langham Creek before taking on Mayde Creek in the 5A championship game where they finished with a 4-1 victory.   To view additional photos of the the varsity in action click on the Photos link and view the 2012 Brenham Tournament album.

To read more about the tournament & how other Katy teams faired in their first weekend follow the link below: 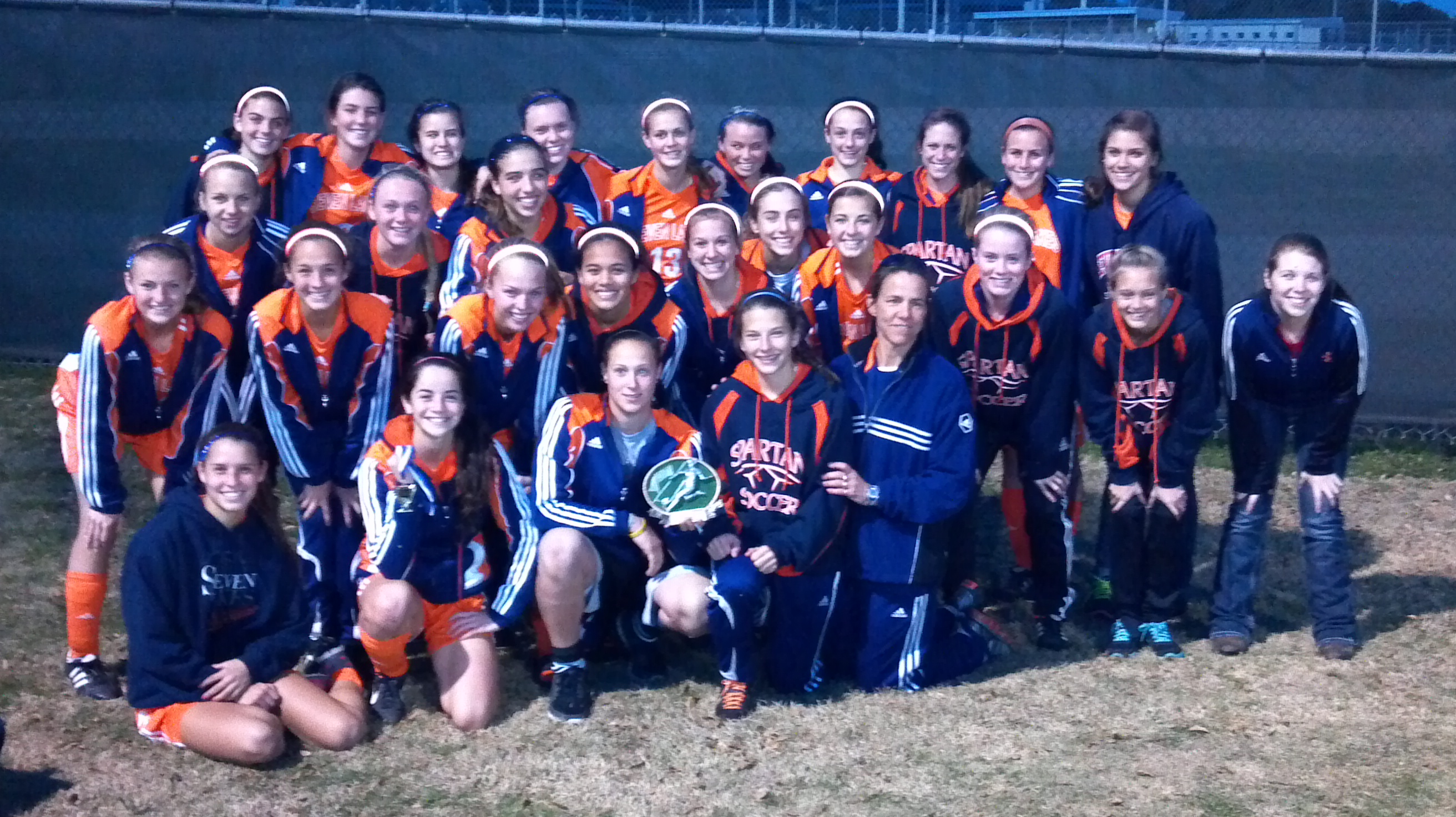