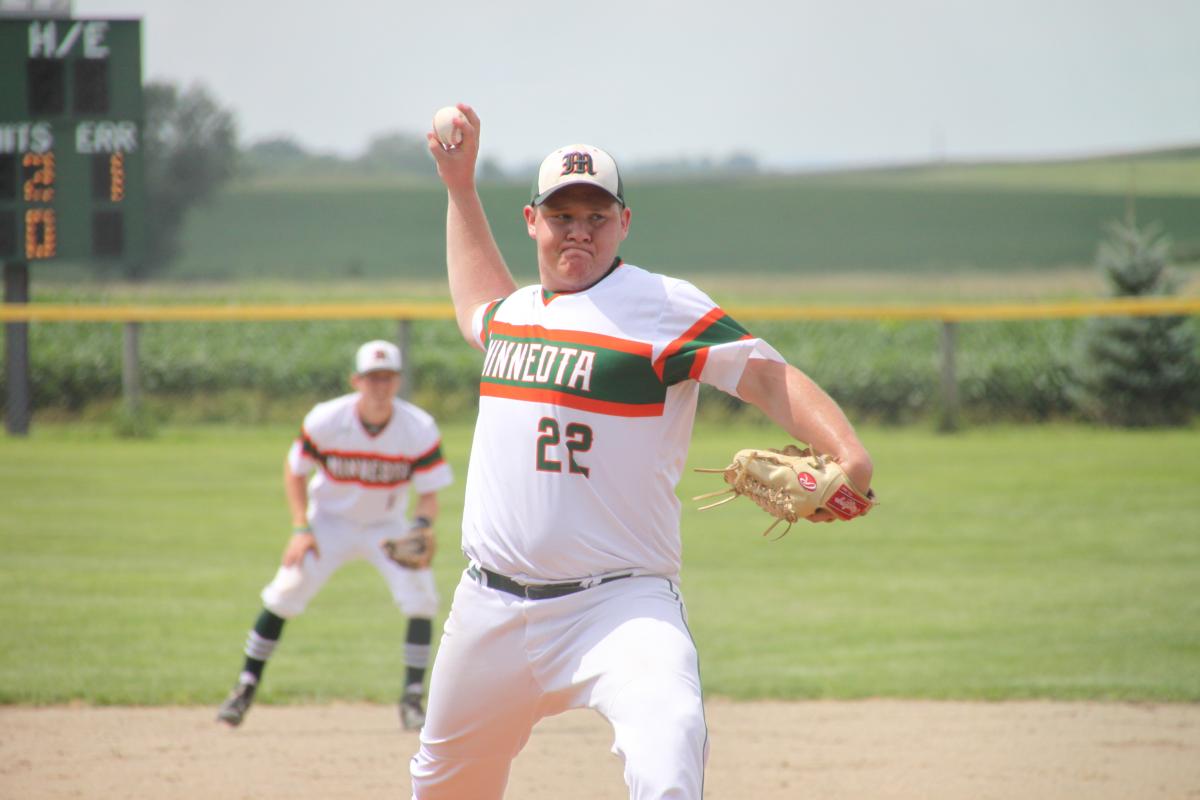 What had been a spectacular season for the Minneota Mudhens ended with a thud Sunday when they lost a 2-0 game to Clinton and were eliminated from the double elimination, Section 9A playoffs.

"We were a little over anxious and tried to do too much. At times were were over aggressive," said Assistant Manager Beau Buysse, who tried to sum up the six-strikeout, three-hitter by Clinton's Sam Adelman.

Minneota's only hits all day were singles by Buysse, Alex Pohlen and Danny Hennen.

The second through fifth hitters, the heart of the order, went 0-14. And that told the story.

A pity, too, because the Mudhens got a great pitching performance from Peyton Nuy. "Peyton pitched a great game," said Buysse. He scattered nine hits, stranded 10 runners and fanned three batters while allowing three walks.

And only one of the two runs against him was earned.

Yet, without the Minneota bats "singing," there wasn't much Nuy could do.

"We hit the ball all year — but we couldn get ours bats going today," said Manager Tyson Sonnenburg.

The Mudhens mounted few threats. In the fifth Pohlen started the inning with a single and Jesse Drager sacrificed him to second. Danny Hennen singled. But just when Minneota thought they'd scored with Pohlen crossing the plate, Danny Hennen was called for interfering with the second baseman as he tried to slide into second and Austin DeVlaeminck was out at first to end the threat.

"Apparently Danny interfered with the second baseman," said Buysse. After that, Adelman seemed to get tougher, putting down 12 batters in a row while picking up four of his six strikeouts in those final four innings.

Clinton's first run scored in the second inning after an Minneota got Zak Adelman hung up between third and home — but shortstop Preston Nuy emailed the throw to catcher Jesse Drager well over his head as Adelman scored.

In the fifth a leadoff walk to Sam Adelman cost Nuy when Zak Adelman singled and Chance Haugen slapped a single to left field to send Sam Adelman home.

And that was all the scoring.

Defensively, it was a one-error game. Minneota had some sparkling defensive plays when in the second inning Alex Pohlen caught a ball up against the fence in left field — with his back to the infield.

In the third inning Austin Buysse fielded a hard-hit grounder on his knees and threw out the runner. In the fourth inning Pohlen again retrieved a single in left and threw to Jesse Drager to nail Ryan Toelle trying to score.

In the fifth Sonnenburg wne to the fence tor a good catch and he caught another about the same way in the ninth. In the seventh inning Clinton shortstop Lukas Adelman went into left field to catch a hard line drive off the bat of Austin Buysse.

"We had a great season," said Manager Sonnenburg as he told his players, "You guys put in the time. But we only scored two runs in the last two games and nothing went our way," he said.

Sonnenburg made a plea to keep the "this group" together for next year's season.

"Adelman has some speed and mixed up his pitches. But he's a guy we should have hit," said Buysse.

"It's frustrating. We lost to all the teams we've beaten earlier," said Buysse. "The trouble is we were fighting out of jams all day," he said. That was obvious by the 10 runners Clinton strandeded on base.

"Quite honestly, the strike zone tightened up on Peyton (Nuy). It changed a lot of the situations," he said.

Minneota ended the season with a 20-7 record — the first time they've won 20 games in a single season.

•Morris upset Dumont 3-1 on Saturday to secure a spot in the state tournament.

Next Saturday, August 10 the tournament will continue at Rosen and will include:

•"We really want to thank all the fans who supported us. Also, to our Mudhen board. We really, truly appreciate all of them." — Beau Buysse.