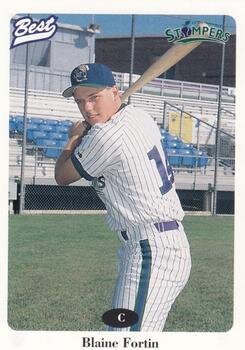 Tall, strong and dedicated. As a young baseball player with big league dreams, those qualities helped him stand out on the field, Fortin said. He was drafted by the Toronto Blue Jays before he finished high school, and spent three years playing in the minors. It was an invaluable time in his life, he said.

“The challenge and the travel was a really good experience for me,” Fortin said. “Getting to see all parts of the States and Canada, as well and playing against players from all over North America and Mexico and the Dominican Republic, Puerto Rico, Australia - you get to meet a lot of different people.”

In January of 1997 he had the opportunity to catch for Roger Clemens at what was then known as the Skydome in Toronto. They called him down after they signed Clemens, Fortin said, and he met him and his family. Nicknamed “Rocket” Clemens had 4,672 strikeouts over the course of his 24-season MLB career.

That same year he attended big league spring training, meeting players he had grown up watching on TV.

Although Fortin is mostly finished with his playing days - save for a few old timer games, he said, he’s been sharing his knowledge of the game with adults and youth in Manitoba for many years.

“Everytime I can get out and help a kid out with catching, hitting, the time flies,” he said. ‘Working with the kids, talking baseball with coaches, you know, it keeps me happy.”

Fortin coached a 15U Manitoba prospects team a few years back at a weekend tournament against Team Saskatchewan and Team Alberta. More recently in 2018 he coached the 16U Manitoba provincial girls team at their tournament in Bedford, N.S.

“It was a really good experience for myself and the girls,” he said. “They seemed to react to my coaching very well and [I] kinda grew attached to them.”

Fortin also stays busy with the sport working as a Baseball Canada certified instructor and coach facilitator. During the past six years, he’s helped train many coaches in the province.

“I find that I have a lot of knowledge of the game and I can contribute in a few ways,” he said. “It’s something I love and it’s something that I look forward to every summer.”

Check out the following link on an article featuring Brittney Lanqlais.  The article is on pages 20 and 21.

Congratulations to those ladies who took part in the numerous events held this past summer representing Manitoba.

However, one thing is still evident – there is a need to develop more pitchers and improve our defensive and offensive skills before next season.

To answer this need - the Southport Recreation Facility has been booked for the following eight Sunday sessions:

We were fortunate enough to secure a great time frame of 10:00 a.m. to 1:00 p.m., and we are looking for some assurance from those individuals who are interested in taking part in these sessions.

We have an experienced, and knowledgeable couple of coaches (Blaine Fortin and Roger Langlais) who will be heading these sessions.

Please note that the space booked is three-hours in length and there will be a cap of fourteen girls.

This year, the age has been set for ladies 13 years and up.  Players will be grouped based on age.

In order to confirm that these sessions will move forward, we need a commitment of those who are interested.

Please confirm your intentions soon, so we can move forward.