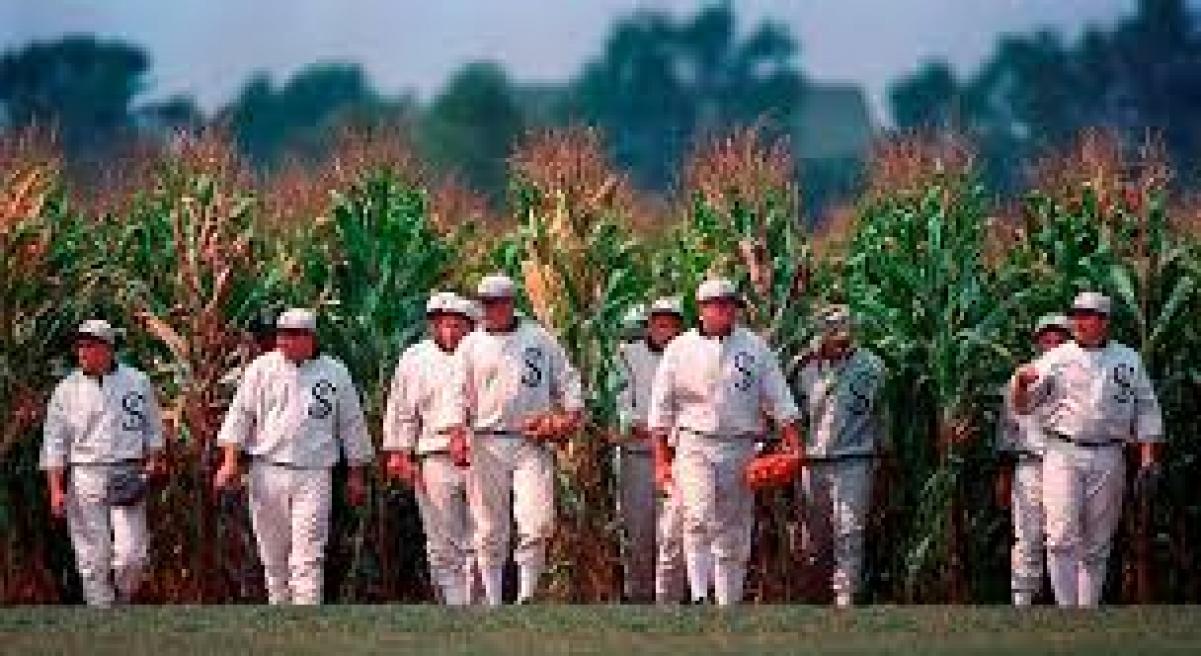 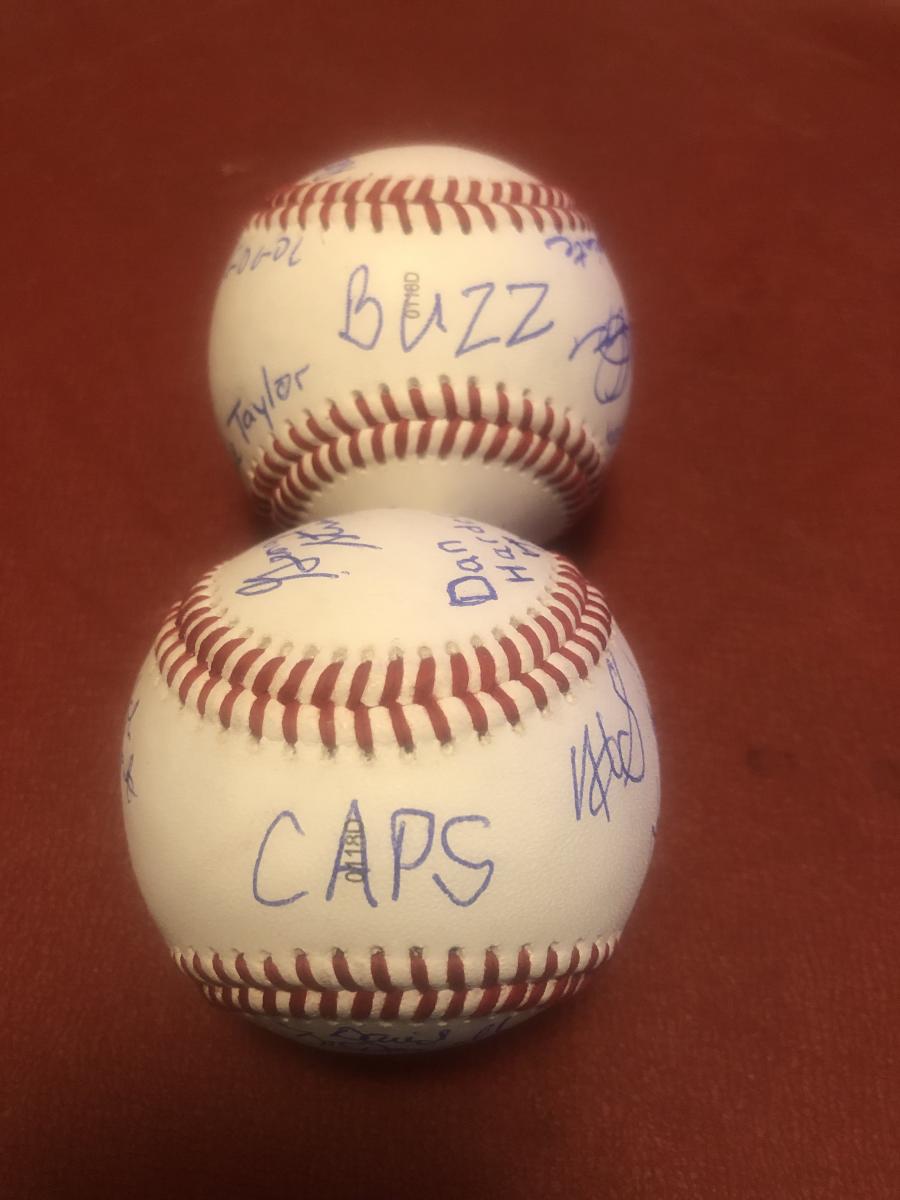 August 17, 2021 - Milestone LMBA Game a Slugfest and a Gabfest   Despite muggy conditions and a slight air issue, the CAPS and BUZZ slugged it out at Langley’s City Park on Sunday, August 15th in the first ever LMBA’s 60+ Division game.  read more 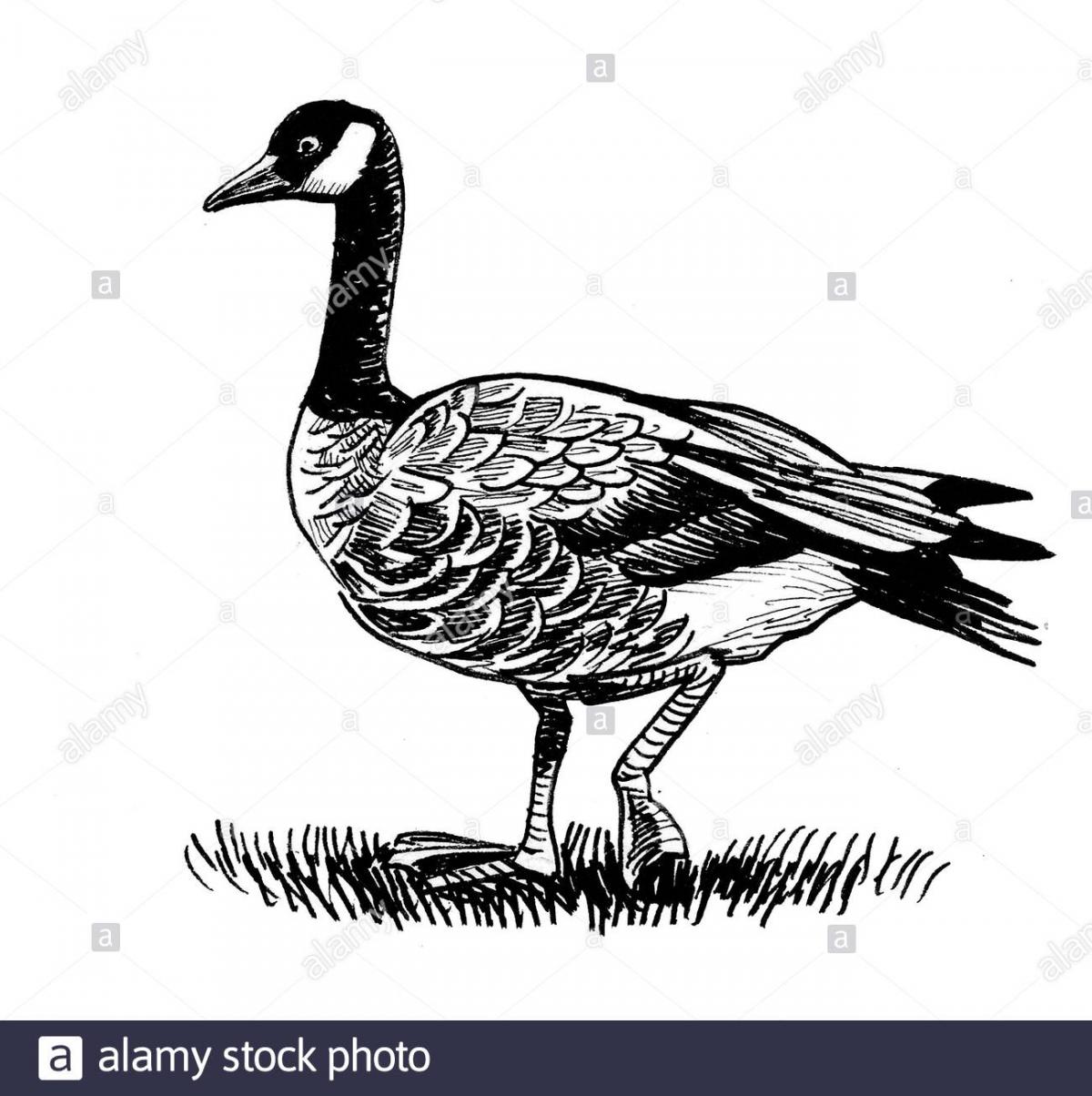 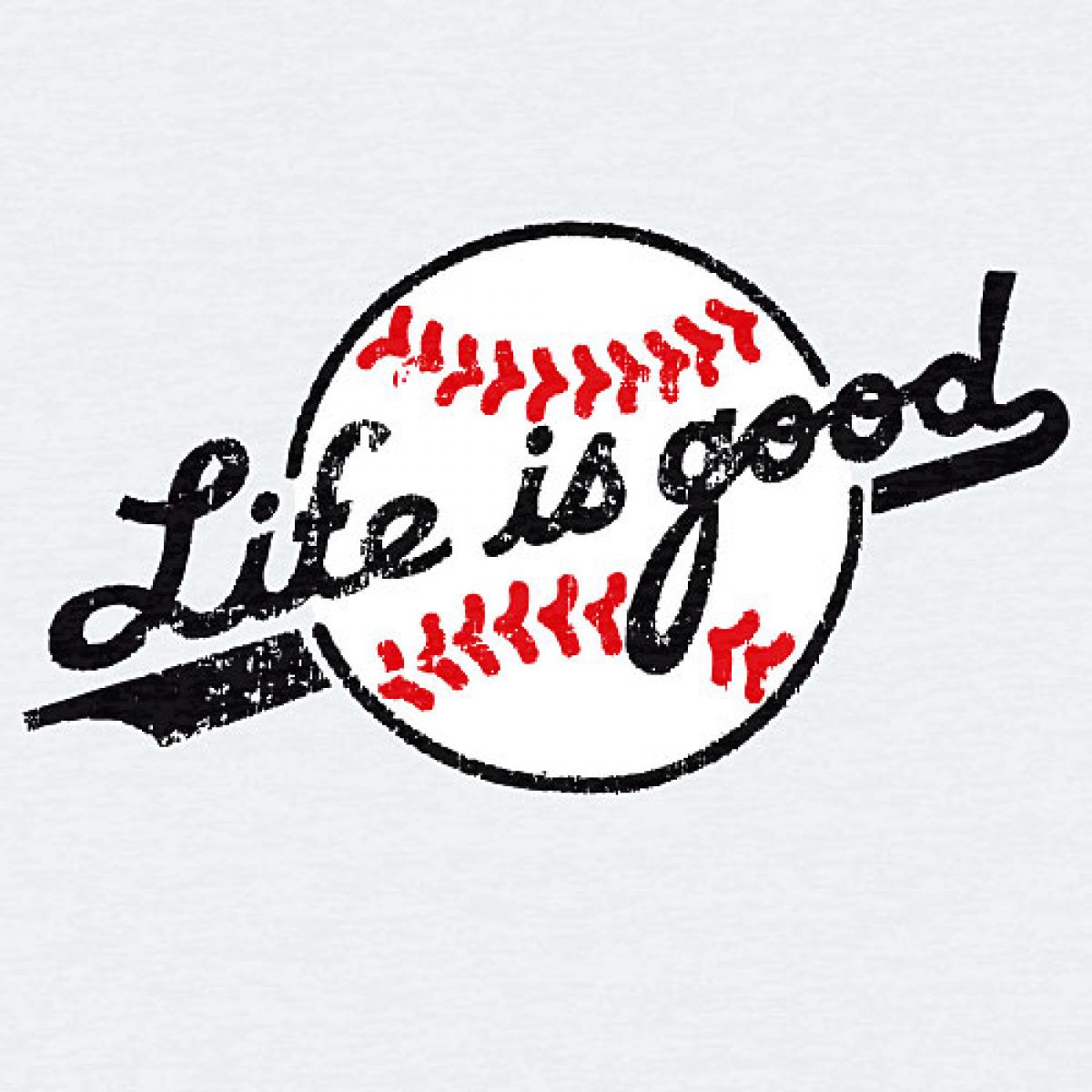 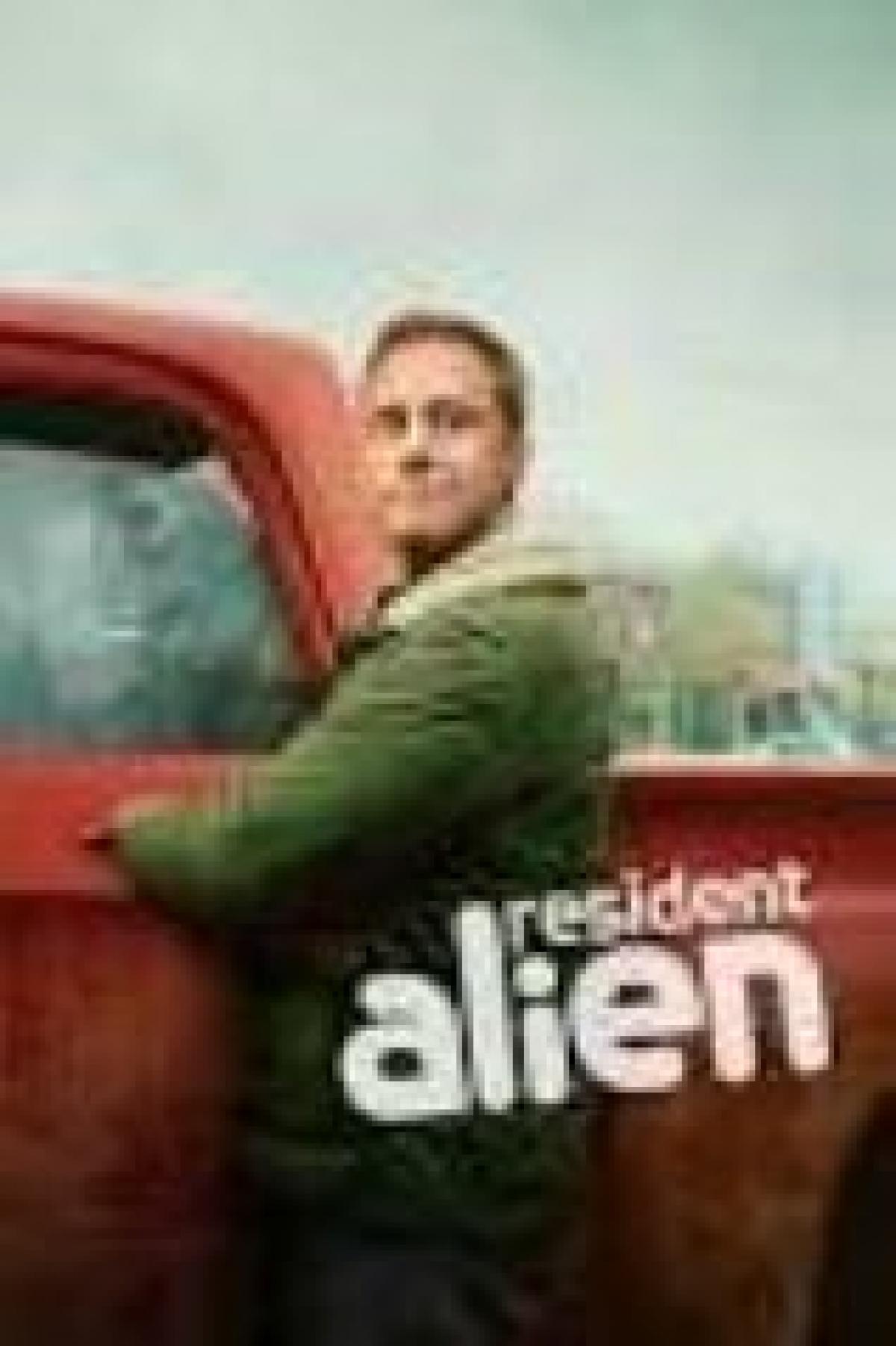 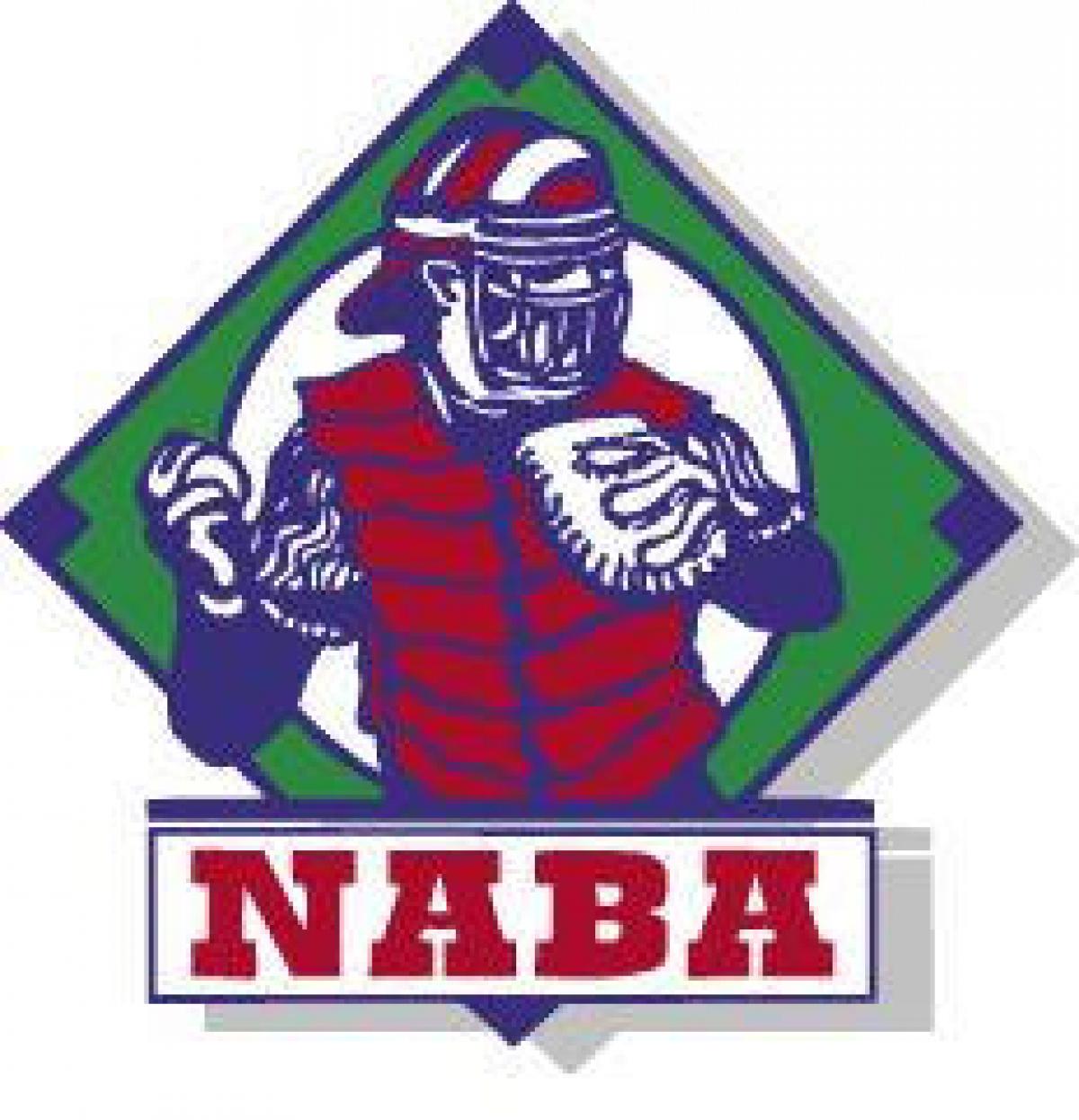 May 17, 2021 - FROM MERV SANDREL BC WESTCOASTERS need a few spots filled on father son team going to Phoenix Oct 7 to 10.  read more 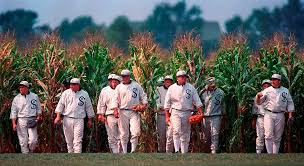 They did not come out of a corn field . . . . . . . they had to drive through traffic to get to a Little League diamond

Thanks to the 19 players, two coaches, and two umpires who participated in two shootings for the upcoming episodes of the popular TV series Resident Alien. LMBA players, coaches, and umpires served as extras while three cast members took the starring roles in a baseball game.

All scenes took place at Chris Zuehlke Memorial Park in North Vancouver – surprisingly, the field is a Little League diamond, so things were very cosey when the cast and extras were on the field.  The size of the field was the first of many surprises – during one of the scenes, the game was interrupted by an alien space ship crashing in right field.

Peter and Jovan looked like giants on the mound and they brought some pretty intimidating heat from 44 feet away.  Matt was a speed demon running the 60 foot bases. Aidan threw some impressive 150 foot “ropes” from a shallow center field.  Kenny and Ward were outstanding in their roles as coaches – mainly herding their teams on and off the set.  Brad and Dan, as umpires, got to “punch out” some of the cast members.  When not in uniform, players also served as enthusiastic fans in the bleachers.

Watching the coordination of everything that goes into filming a short scene was educational – camera angles and close ups necessitated the use of a small set rather than a full-sized diamond.

All cast, crew members and workers, and extras were required to follow strict Covid guidelines while on the set - the only times masks were removed were when the set was rolling and during lunch breaks.  The experience served as a reminder BC is still in the midst of an ongoing epidemic - observing how the industry has adapted to Covid was an eye-opener.

Our guys were complimented for their performance, punctuality, and politeness especially from the costume/wardrobe department.  We have asked the production department of Resident Alien to let us know when the episodes will be aired.

Milestone LMBA Game a Slugfest and a Gabfest

Despite muggy conditions and a slight air issue, the CAPS and BUZZ slugged it out at Langley’s City Park on Sunday, August 15th in the first ever LMBA’s 60+ Division game. 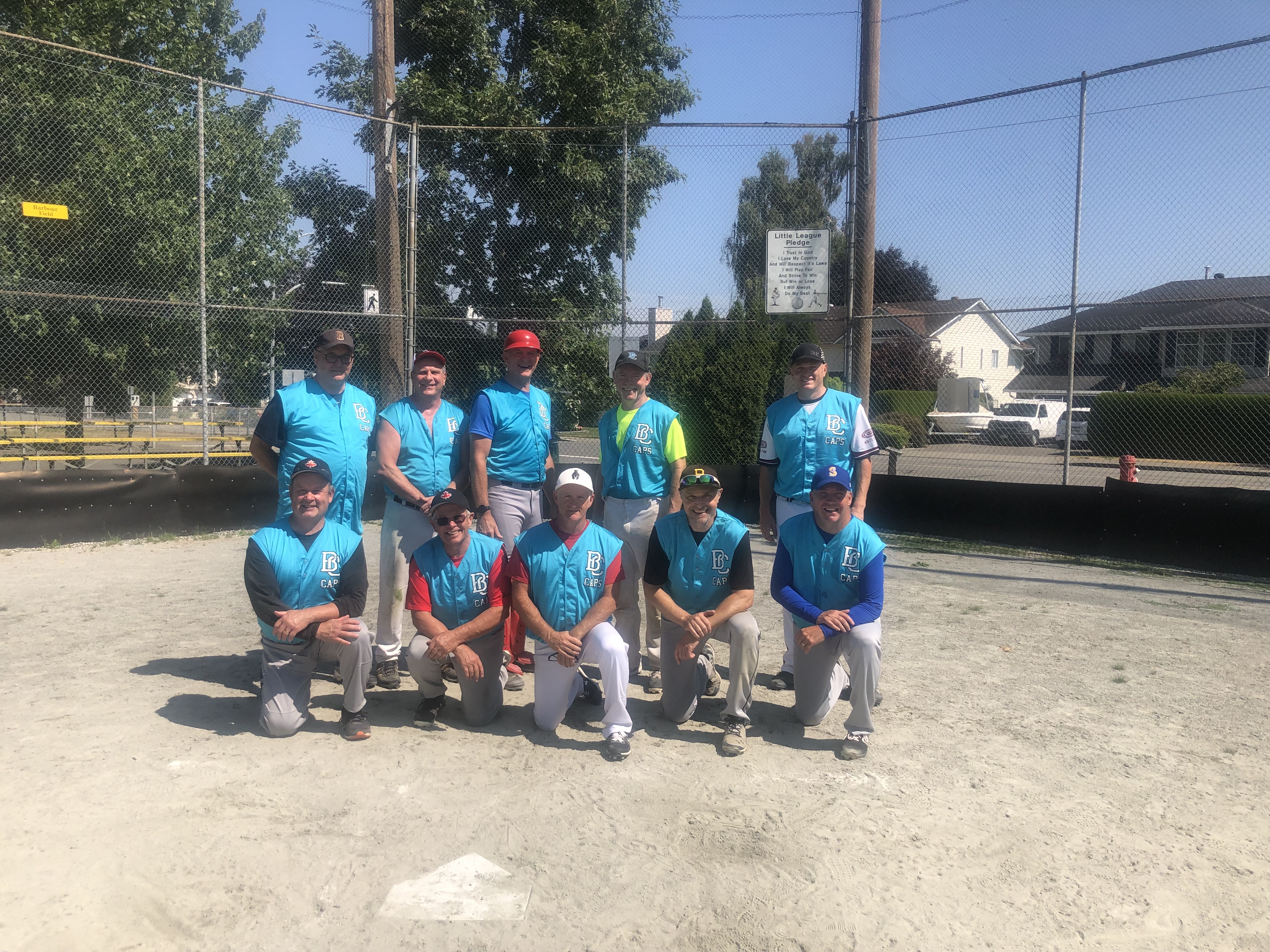 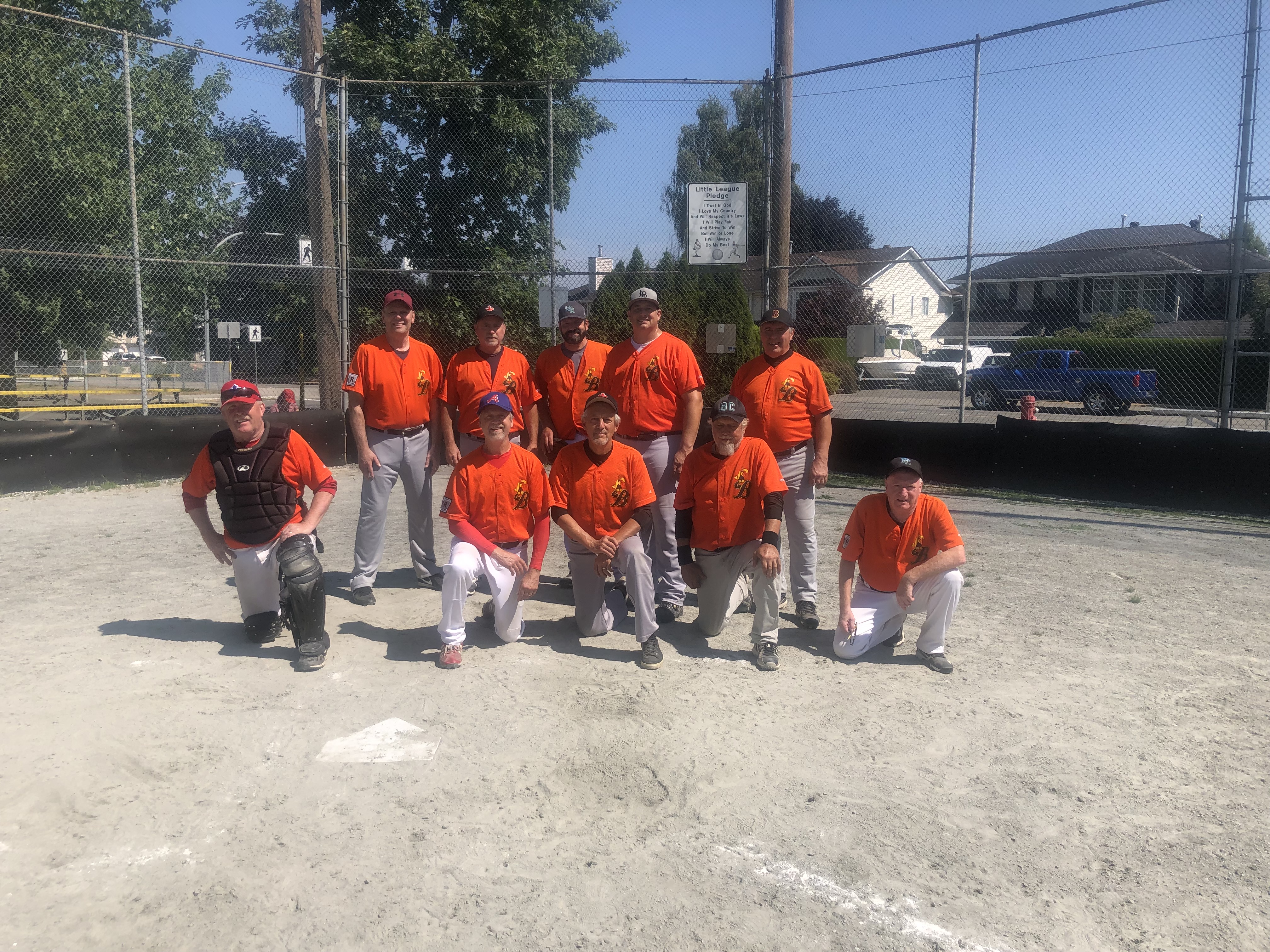 Please check the news article above for a complete report on the game.  Thanks to 60+ Coordinator

Link to Advance article is in the news story and photos are included in our Photos Section. 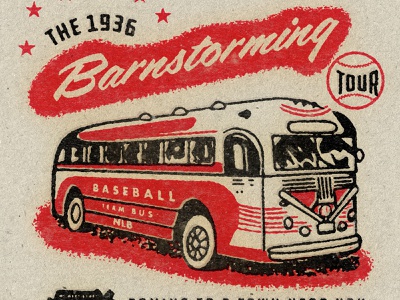 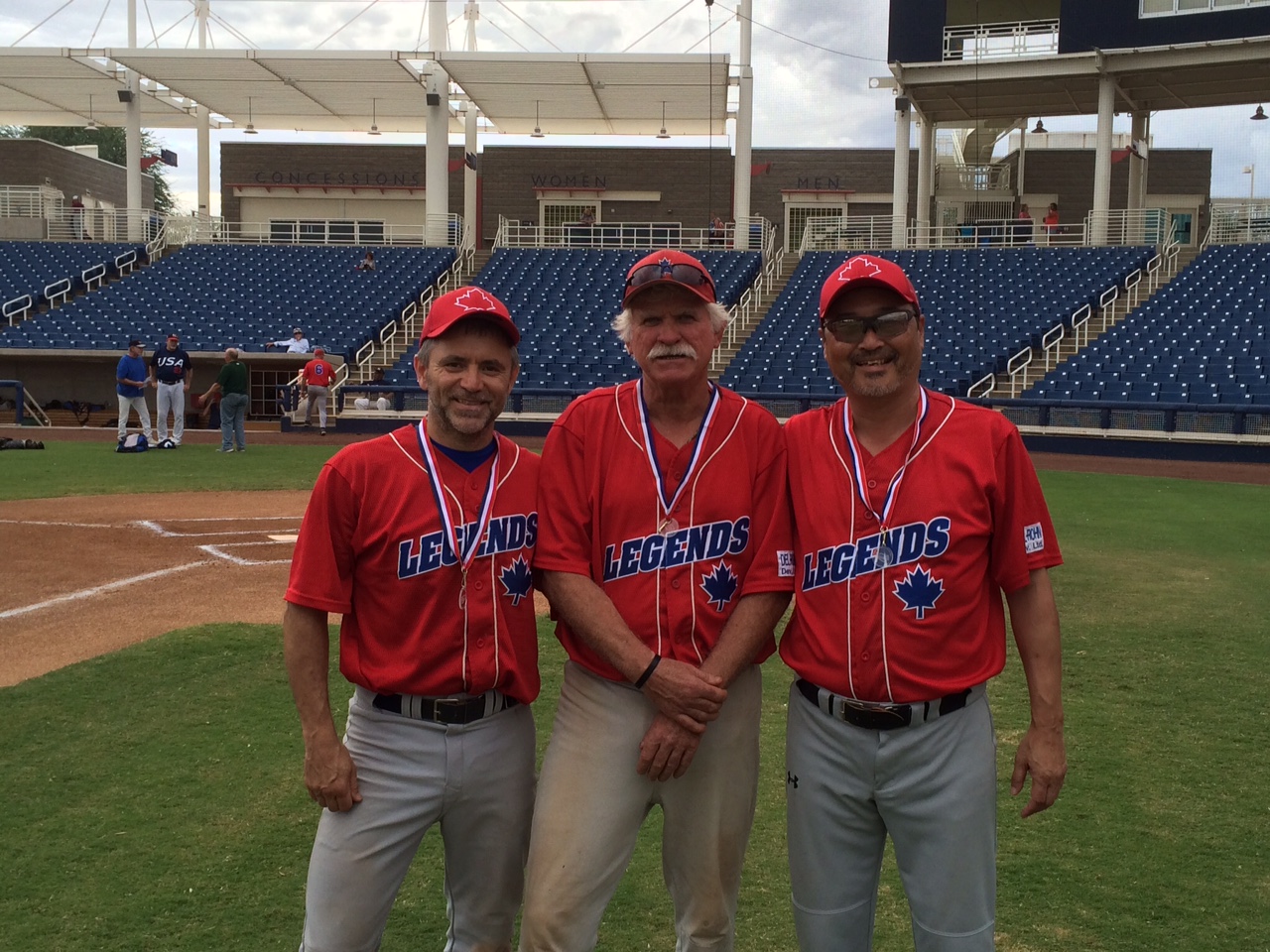 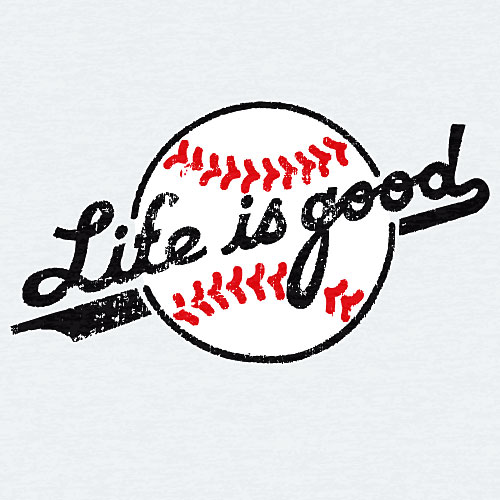 On Sunday, August 15th at City Park in Langley, a group of baseball players aged 60+ will begin play in a newly created division of the Lower Mainland Baseball Association.  Players will form into two teams the old-fashioned way – pitchers, catchers, infielders, outfielders. The players will play a series of games through September in preparation for setting up a four-team 60+ Division in 2022.

The LMBA began play in 1994 with four teams in an 18+ division and six teams in a 30+ division.  With the growth of adult recreational baseball, the league expanded to 38 Lower Mainland teams with a 45+ division added in 2004.

Covid interrupted our 2020 season with most teams taking off the entire season but a group of players in the 45+ Division continued play under a very modified format.  This year the LMBA has 24 teams playing in our three divisions and many more returning teams are anticipated for our 2022 season.

Plans for a 60+ Division have been in the works for a few years thanks to the organizational efforts of Langley’s Howard Sandrel.  Along the way we have been helped by Langley Parks and Recreation and Langley Minor Baseball.  Plans call for the use of Langley Minor umpires to give them an opportunity to umpire at an adult level.

The Old Guys can still play – many of them feel every game is a bonus.  With the addition of a 60+ division, the LMBA is unique among recreational leagues in Canada and proof that baseball can be a life time sport.

LMBA HAS BEEN CONTACTED BY THE CASTING DEPARTMENT OF THE POPULAR TV SERIES RESIDENT ALIEN. THEY ARE PLANNING TO INCLUDE A BASEBALL GAME AS A BACK DROP TO A SCENE IN AN UPCOMING EPISODE.  IF YOU ARE INTERESTED AND HAVE A FLEXIBLE SCHEDULE, PLEASE CHECK THE NEWS STORY ABOVE.  MORE DETAILS FORTHCOMING. 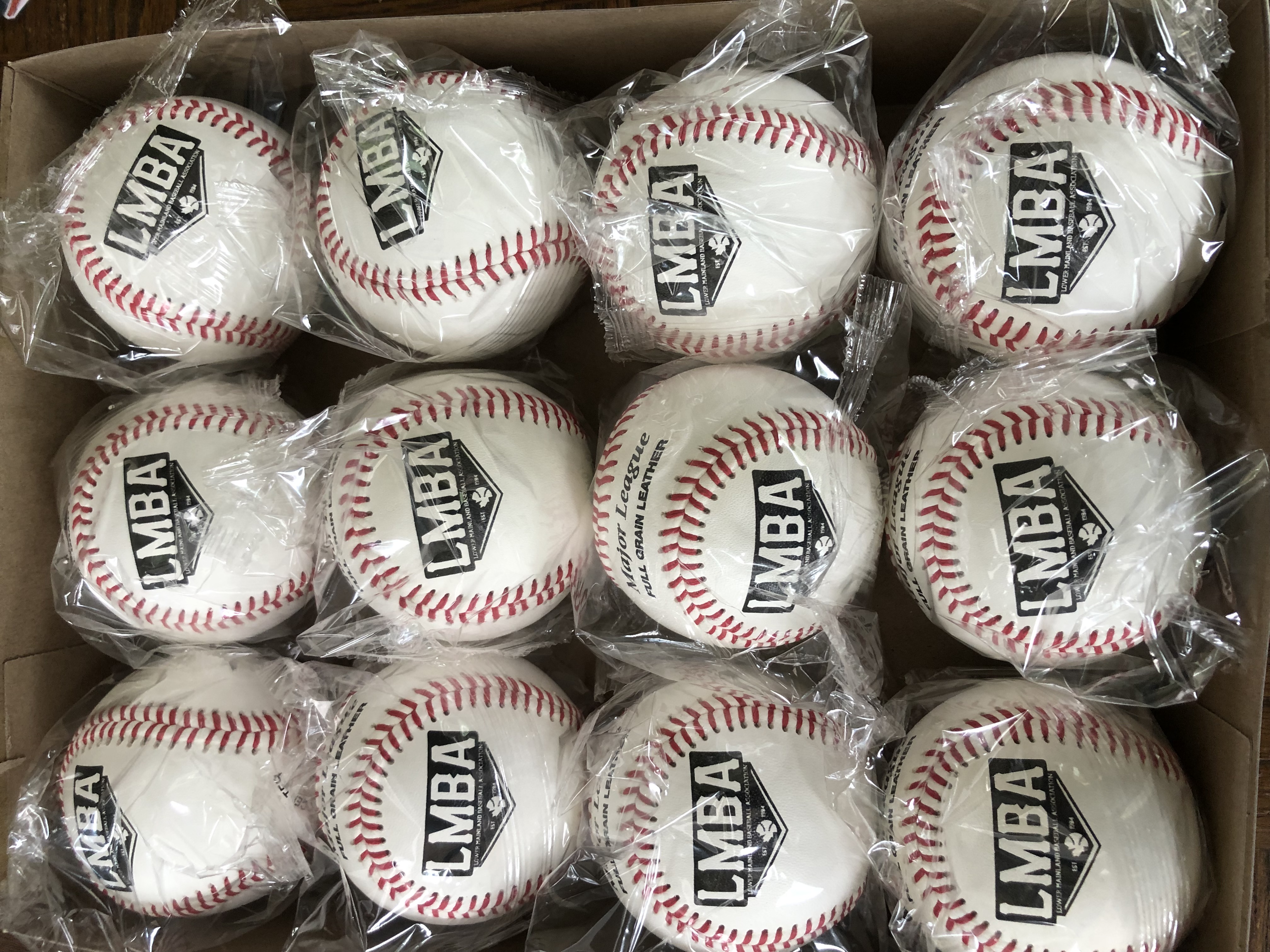 FOLLOWING OUR 25TH ANNIVERSARY SEASON IN 2019 A DECISION WAS MADE TO ADD OUR LOGO TO BASEBALLS USED IN OUR GAMES.  UNFORTUNATELY COVID INTERVENED IN 2020 SO THE BASEBALLS WERE KEPT IN STORAGE AT MVP ATHLETIC SUPPLIES.  OWNER SHAWN HANCHEROFF HAD APPROACHED US WITH SEVERAL DESIGNS OVER THE YEARS SO THANKS TO SHAWN FOR HIS INPUT AND FOR KEEPING OUR BASEBALLS IN STORAGE.  THE NEW BASEBALLS HAVE BEEN MIXED IN WITH OUR CURRENT STOCK AND WE HOPE TO USE OUR "LMBA" BASEBALLS GOING FORWARD! 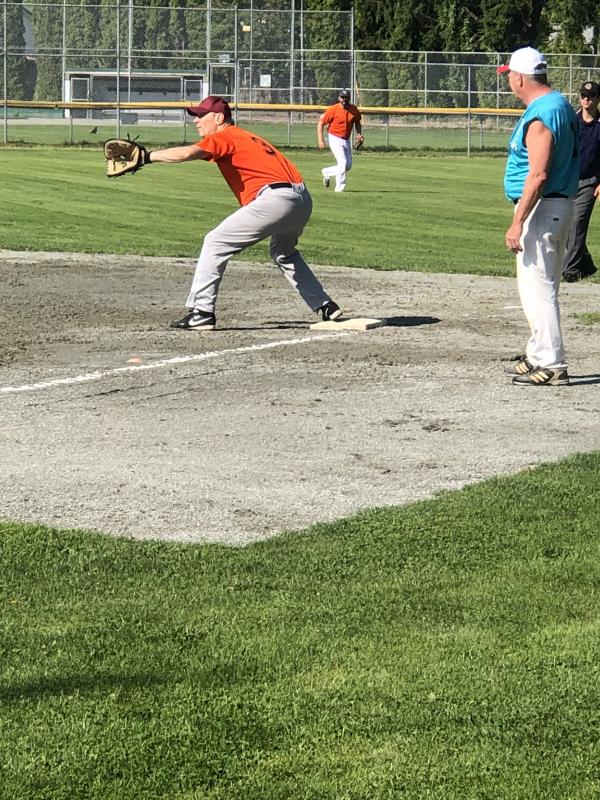 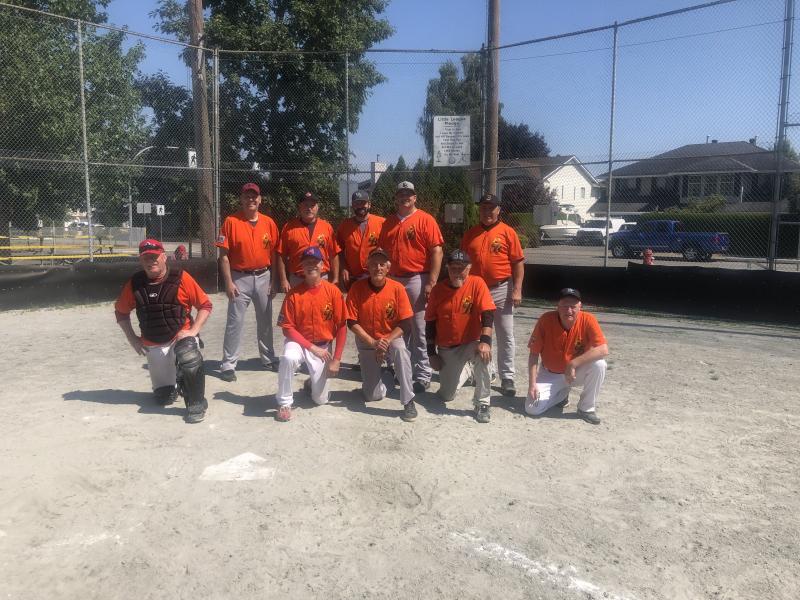 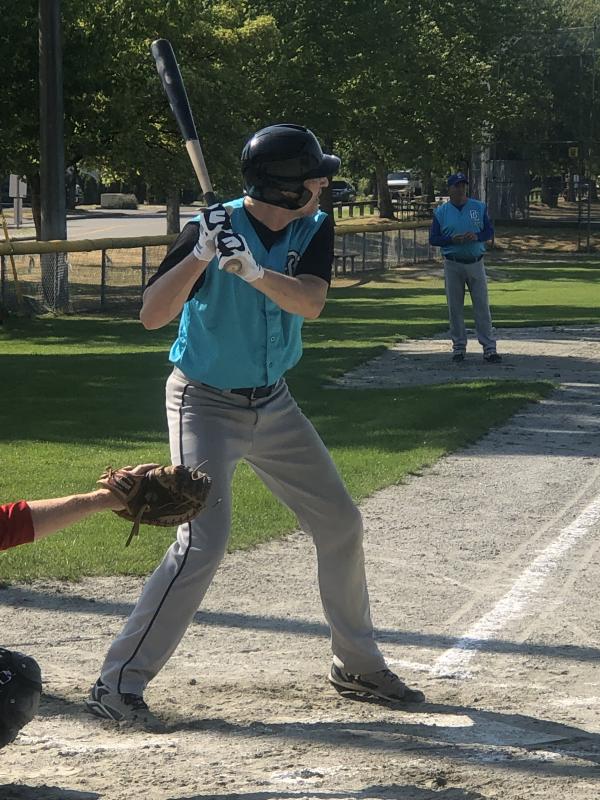 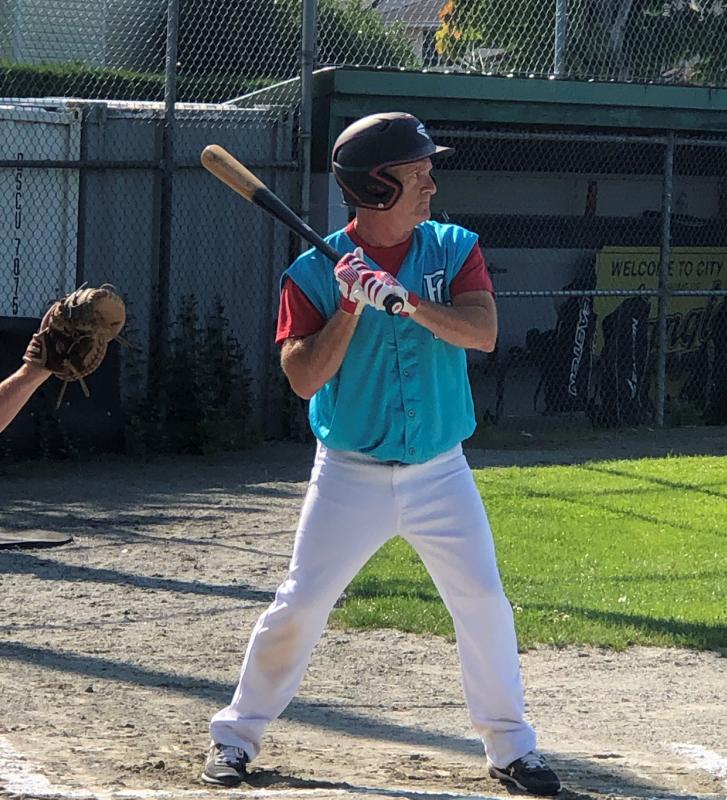