After their year end party, the Cannons woke up casually Sunday morning to do their annual trophy shine. But when finished they seemed to have some extra trophy polish left over.  After much confusion it was recalled that the Brewers had outplayed them the day before and beat them in the NSMBA championship 2 games straight, winning the trophy for the first time since 2003.

Cannons bats were simply silent until the 7th inning of game 2.  A 10 run deficit in that 7th inning was just too much for a repeat of 2009's miracle comeback in the finals.  The Brewers played well but were definitely beatable, and not intentionally walking former Blue Jays didn't hurt (4-6, 2B, 3B, HR, 6 RBI's).

The Cannons have come a long way however, gracious in defeat one source said, "the cheer from Howe Sound's bench when Scott from the Brewers lifted the trophy at home plate was deafening.  It was like we all were Brewers."

It is apparent the team will look to regain the crown in 2011 as spring training has been announced for April 23rd, a full week before the season commences.

I swore Scott from the Brewers was 36 when we started playing in this league. 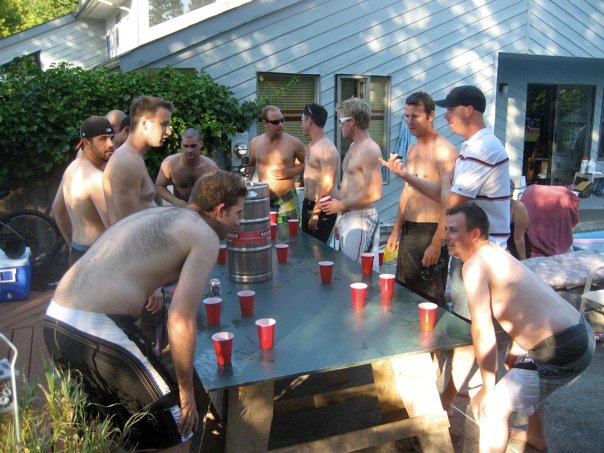 Cannons celebrate second place.  Uncle only one with sense to keep shirt on when camera near. 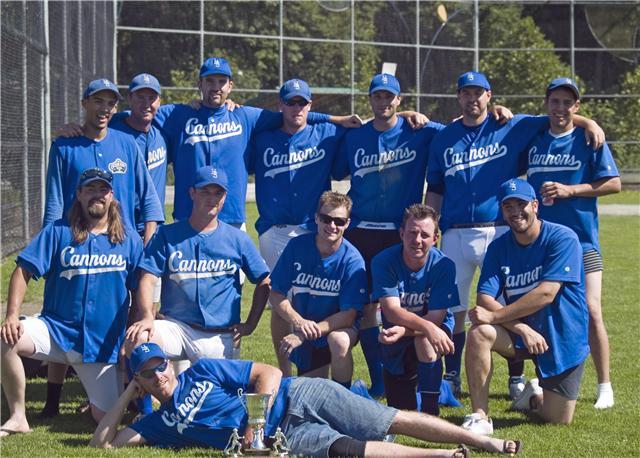 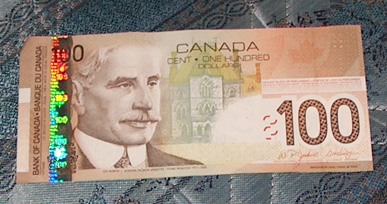 August 3/2010
A view from the bench
with the Hammer

Well it seemed all the Cannons came and got positive with Kraz Big this past mid-season tournie. (At least Victoria got a one day sight-seeing trip out of it) Though hungover and sunburnt from the previous day the "Brew Crew" and Cannons start the day with a very frightening and close game as Jerry Lalli grunted louder than ever! They had this 3rd baseman who was just a stud! But in the end the Cannons rolled right thru to the finals against the Elk..I mean Moose. It's Wiiiiiiiiiiiiii7h!!!! Once again we had ourselves a tight one even T-Roy Billy was flying like Superman! In the end our Dominican sensation was the hero ripping a trip to cash in the winning runs. Cannons win (Not being biased at all) and all share the same warm beer out of the cup all receiving a cold sore! Yayy! This weekend will be the start of an exciting showdown to see who really runs the block called Parkgate. The Tiger balm and Advil's are comin' out! Gotta get these fingers loosened up to score I predict it will be a hitter's tournie. The Pi-Rates, The Dead Reds, The Lowly A's, The Moooooose, The Brew Crew and The Cannons will do battle may the best and most belligerent team win. Bring beer. 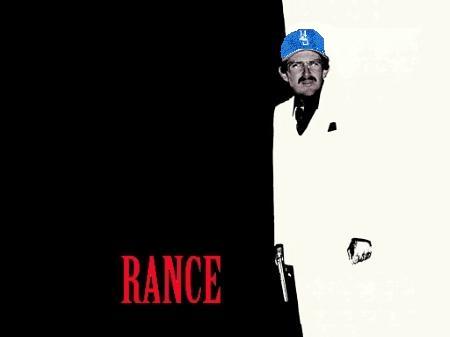 In order to counter the Brewers and their roster of former (and almost) Major Leaguers, Cannons management have confirmed they are actively recruiting for the upcoming Midseason tournament.  It is after all, all about contact.

Senor "Javid" Dones reached back like a pull start lawn mower and crushed his first innagural wooden bat bomb over the left field fence at Laroy Watt field this past saturday. Even though he hits a couple dozen every practice this was a milestone in the slugger's Cannons career. On behalf of the NSMBA and the Squamish Nation we bid you congatulations Senor!! Gotta love big winds... Oooooool Lips kept up his end of the bargain as well bapping 182' bombs and mowing down the Reds with his ?ball..After stretching his hands thouroughly from scorekeepersitis The hammer followed his hitting mentor T-Roy Billy with a long ball as well at Parkgate for the ages that nearly went out if the air density was right. Needless to say shock has set in. The Mid-season is just around the corner as all teams begin the week long ramp up the the most historic event in the NSMBA (the only tournament that serves as a chance to win beer money for after) The Brewers may have Pond but I hear the cannons have a ringer themselves bringing the studly 'Rance Mullininks' out of retirement for this one. it's all about contact! See y'all at the show..the kids gotta go.. 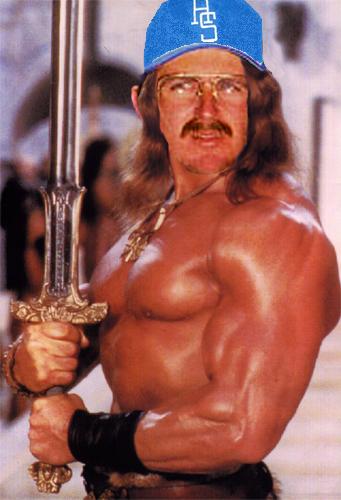 A quick survey of the field at Laroy Watt on Saturday would have noted no fewer than 3 Cannons with their pants hitched a-way up to their knees, showing off some long blue socks and drooping calf muscles.  Only time will tell if abandoning the shapely and forgiving unhemmed full length pant in favor of high socks is a nostalgic growing trend, or just misguided fashion sense.

Well well well,it seems our amigos the "BREW CREW" are right on the Scannons tail but it's ok because we always get theirs ;) Apparently Thitch learned everything he knows from a wise score keeper... The Piiii-Rates signed Stilley they're makin a run!! In other events the Cannons were 'trippin out' this week with 3-baggers spraying every which way.. It's Wiiiish! Hey 77 ...time blue!...time blue!! RTCO Bro. Double header up in Squatemala this weekend..lot's of chances to join the elite "282 Club"! Until then my friends..

Fairly basic victory of the Moose by the Cannons I witnessed playing Lucky Lager pinch runner.  Wish thought we were playing slo-pitch tricking a few with 'The rainbow" pitch! John Haar invented that one!  Lips' lips almost slipped but he kept them zipped. Brewers still in first place??  Only until Dave day's A's leave them in a daze.  Is Mackie the new Ace? Davey J with a spray...to be continued Tuesday...

Alex Wishn7ki inspires return of player of the week honours

After 2 impressive pitching outings, Alex Wishseveniki has made the case for the Cannons player of the week to return.  This week was the first week Alex was legitimately named top player after a 2 hit complete game shutout against the first place and amazing Brewers.

A promising sign of improved play, Wish was also the only player to never be put out during the Cannon's performance at the Doug Conn tournament in Victoria.

After borrowing somewhere in the neighbourhood of $1800 from the Victoria Mavericks baseball association over the 2008 and 2009 seasons, the Cannons have now tentatively confirmed their repayment plan which could take place over the May long weekend as follows:

And 5 k's for Big Willy style

Yessss the Cannons of '04 was there!! Izzzzz it Wiiiiiiiiiiiisssshhhh, outing for the books guess who rolled thru on his good looks. Dave day's gettin pumped and it's one week till Vic, we think he's our coach but really he's a Maverick?? Well happy birthday Scotty the brew crew was victorious just for you ;) And well nothing elser matters if you K 5 times anyways. 5?? Really? back to the cage...

And he comes up throwing...

The gun from Cannons LF proved it was not be rolled thru on launching a 109 foot rocket to home plate oh but wait KRAZ be big KRAZ be quick KRAZ swat ball over fence with wooden stick! Jacko's knuckleball danced as did the rest, having 80 beer in the dugout is best! Can't wait to play the brews maybe their 3rd baseman will get a hit too..that's the call the kid's gotta go take some fly balls...

Dave day all the way!

Oooooool Lips was even doing handstands.

It's a bird it's a plane no wait it's diving Jave! Bringing you this post with crippled hands from colouring in so many little squares yesterday. Well the Cannons looked worried and fatigued when falling behind a couple of runs but answered back with 104 of their own just for fun. Fat Rob was wishing he was back in Tibet bangin bitches with his homie Buddha. Due to a slight man crush and fear of Jerry G Matty Gildersleve will not be playing this year. Didn't hear much chatter from Kraz in the field...hmmm. Johnny Stuuuuuuuu! Maybe we will have to let the Brewers win one game this year, it's easier being a columnist when there's more to pick apart, thankfully we still have Johnny V for that purpose. Well that's my thoughts, I better stop there the kid has to do some squats!!

As everyone knows, the power of the swing comes from the ground up.  Therefore, the MOST important part of the stance is to have the bat at a 23.5 degree angle (the same as the TILT of the Earth's Axis) to give you the POWER OF THE ENTIRE EARTH'S MAGNETIC FIELD on EACH swing.

June 27/2010
Finally somebody knocks Vintage Kevan Mackie off his high horse and even though Cannons General Manager and sentimental favorite lifted his first homerun in 6 years a long way out of Laroy Watt, ol Lips was too dominating at the plate and in relief to be looked over.