The term"semi-professional football" implies that the men who play it are being paid to play, but at a less-than-livable wage. This is misleading. In most semi-pro leagues, as is true here in the Semi-Pro Football Leagues, it is against most league rules to reimburse players  not for practicing, for playing, or in any other way. Thus, no one is making any money to play for the Georgia Falcons.

In fact, the opposite is the case. This team is made up of players who love the game of football so much that they pay to play. Each and every member of the Georgia Falcons  has had to purchase their own equipment, contribute a player fee (in order to insure the purchase of the team's uniforms, field rental, and so forth), and pick up their own practice expenses. Over the course of the year, this financial burden can be substantial.

Why then the title "semi-pro?" A look at the history of this level of football tells us that some label was needed to differentiate this type of football from high school, college, and pro football. A hundred years ago, when it was in its infancy, semi-pro football was the precursor to pro football. A few itinerant players, wandering the country in search of games to play in, were paid small amounts (usually under the table) to make local, small town teams look better and win.

So "semi-pro" football merely means "amateur football" in a real sense. It is played by adults, from the ages of 18 to "whatever," who love the game enough after their high school and/or college careers that they "haven't gotten it out of their systems yet!" Coaches, organizers, sponsors, cheerleaders,  EVERYONE connected with the Georgia Falcons a genuine volunteer!The Georgia Falcons is, in every sense of the word, a "community" organization - run by and for the players, coaches, and their families, and all fans of football in America. The team "runs itself" to the extent that the players even have to buy their own equipment and pay a player fee to cover insurance. Thus, we are looking for a  Few Good Men who wishes to get involved in helping with out various efforts, making things easier on the players and coaches, and getting the word out about the Falcons.

Georgia Falcons are still looking for players of all Postion 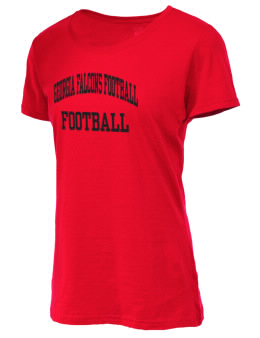