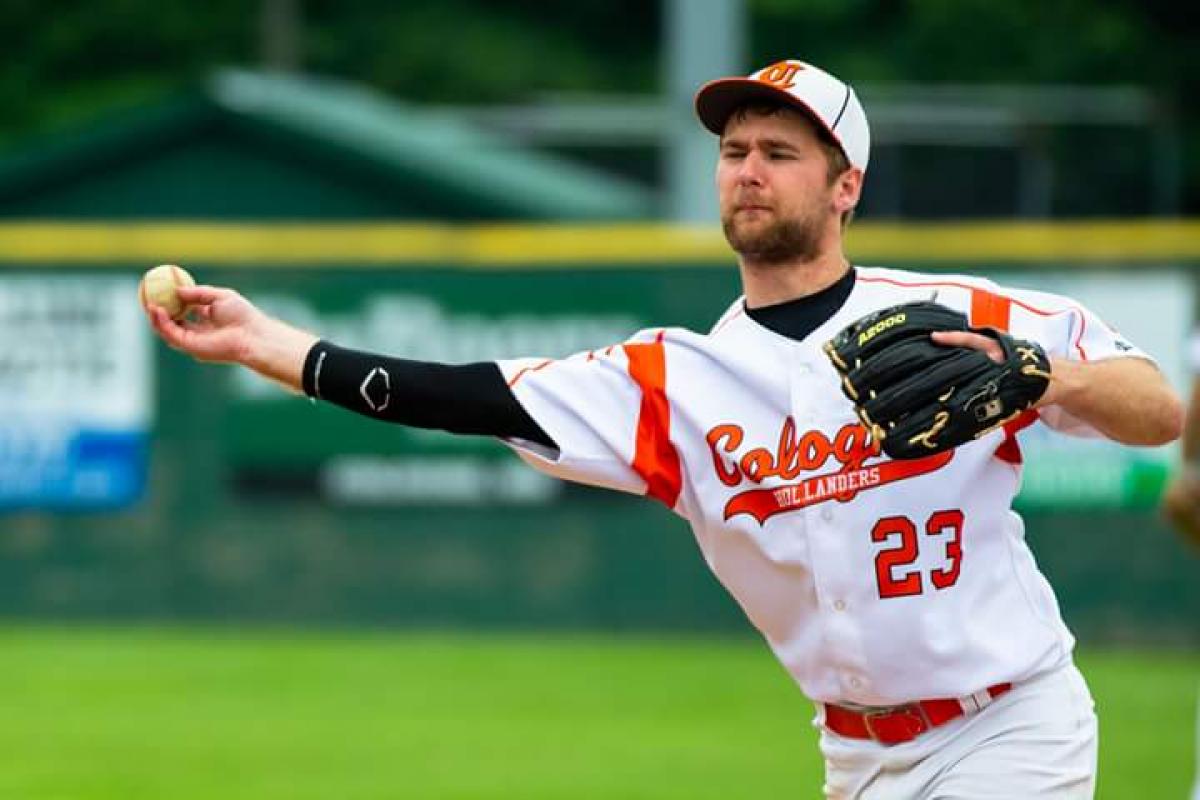 Last night's game was the first game played in the 2018 7C Regional Tournament that saw No. 8 Cologne Hollanders facing off against the No. 1 Plato Bluejays. Although Cologne was the lower seed they have been playing well as of late. They had hoped to roll the momentum from the St Boni series into regions against a very tough Plato team, but a great pitching performance from Chris Odegaard and timely Plato hitting proved that it was not to be. Kyle Twait was asked to started on the hill for the Hollanders. After giving up three runs in the first, Twait settled down a bit and put up a scoreless second, third, and fourth. Two Cologne errors in the fifth allowed two more unearned runs to score. After five, Twait's night was done. Tanner Luebke followed up Twait for the sixth. After a lead off walk and single, Tanner struck out the next two batters, but Plato's lead off hitter, Chris Odegaard, hit a timely double to add two more runs to Plato's tally. Joey Lilya came in and finished off the game by pitching the seventh and eighth innings. Lilya gave up zero in the eighth, but an error and double in the ninth scored one more.

After a rough start, the Cologne hitters made adjustments and started putting threats on the bases. The Hollanders just couldn't get that timely clutch hit. Plato set down the first eight hitters in order. In the bottom of the third with two outs, Brandon Fritz got a single followed by a walk to Zack Nelson and Casey Clemensen. But that threat was shut down without a run scored. With one out in the fourth, Anthony Brenner hit a double down the rightfield line. Two batters later Jon Kummer singled up the middle to push Brenner to third. Brenner then scored on a wild pitch to score Cologne's only run of the ballgame. Cologne was threatening again in the sixth as Kyle Brazil lead off the inning with a single that hopped over second baseman's head. Brenner singled. Jon Kummer got hit by a pitch and just like that Cologne had bases juiced with only one out, but Chris Odegaard showed why he was the league's top pitcher after striking out Kyle Twait and Austin Pysick. The night's offense was led by Anthony Brenner who had three hits. Jon Kummer reached base three times with two hits and a plunk. Casey Clemensen also reached base three times with two walks and a hit. Joey Lilya, Kyle Brazil, and Brandon Fritz all got one hit.

Last night's attendance was outstanding. It is great seeing the orange Hollanders support! The night's loss puts Cologne in the loser's side of the regional tournament. The next game will be Sunday August 5th at noon against the loser of the Green Isle/Carver game being played Friday night. The boys still have two wins in them before next weekend. Keep up the support and cheer on the boys of summer!