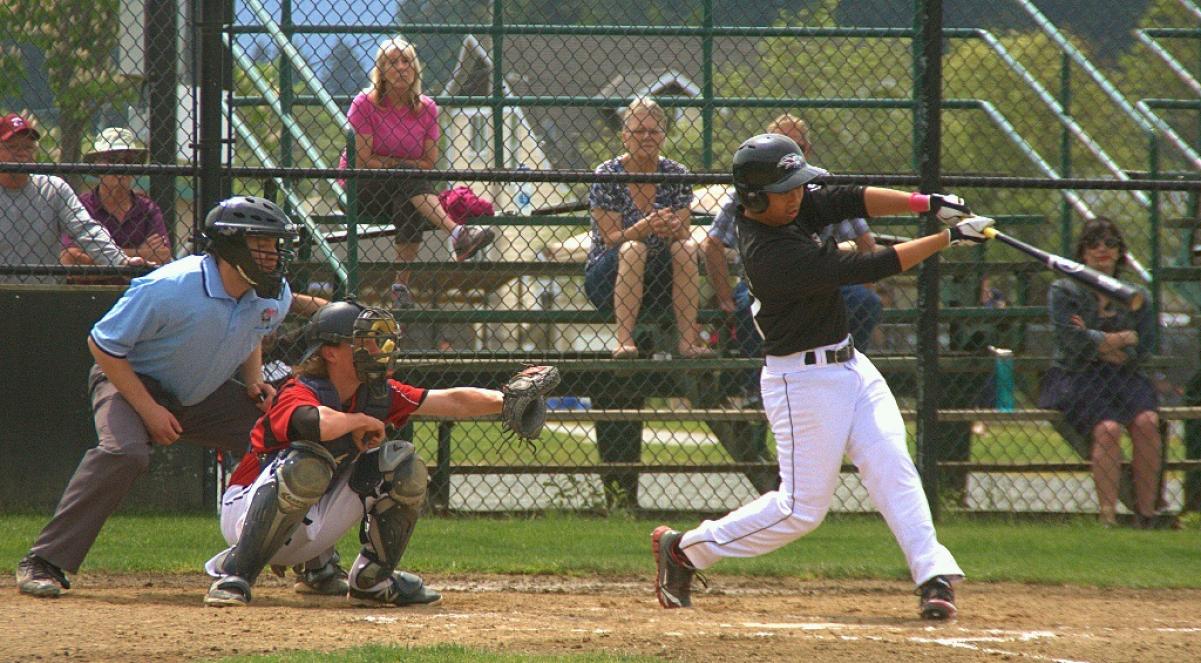 The Black Eagles stopped over in Duncan for Sunday's double header against the Mustangs who had split their double header the day before against our Red Eagles. Matt Collett started on the mound and cruised along for two innings, not allowing a hit or a run. Suddenly in the third, after allowing a hit and two walks, he found himself with a 3-0 count with the bases loaded, two out, and the go-ahead run on third. Unfazed, he threw two consecutive strikes and got the Mustangs batter to ground out to second. It was the only time he got into a jam and he neatly escaped. He never looked back and shut down Cowichan for the next two innings. Meanwhile, the Black Eagle offense had their own problems with Mustang pitcher Gavin Pringe. Despite collecting six hits and two walks in the first five innings, the Eagles came away with a modest two runs. Finally, Pringe maxed out on his pitch count and the doors cracked open for the Eagle batters. Andy Weir and Toni de la Pena led off the fifth with base hits. Luke Seginowich hit a grounder to second bringing in Andy. Next up, Noah Miller hit a single scoring both Luke and Toni. In the seventh inning, the doors swung wide open as the entire lineup safely reached base on seven hits and three Mustang errors. But the offensive highlight of the game was Nico Ingebrand's three run home run blast that bounced off the roof of a shelter tent just beyond the centre left field fence! The eight run seventh inning was the most productive Black Eagle inning this year to finish the game with a 13-1 score.

In the second game, the Black Eagles faced another good Mustang pitcher, Billy Ramwell, who with the exception of the second inning, only allowed four earned runs and gave the Black Eagle hitters trouble for most of the game. But thanks to a second inning outburst of singles by Trey Sjerven, Toni de la Pena, and Luke Seginowich (both Trey and Luke hit 2 for 3 in the game), the Eagles jumped out to a 5-1 run lead. But the Mustangs never let it get completely out of hand, clawing back with two runs in their last at bat in the seventh to make it interesting. Meanwhile on the Eagles mound, starter Trey Sjerven matched his productive at bats with an impressive win with only two earned runs. The Black Eagles left Duncan with an eight and four record and moved into a two way tie with Delta for fourth place in the 16-team AAA Bantam division. Not bad at all.