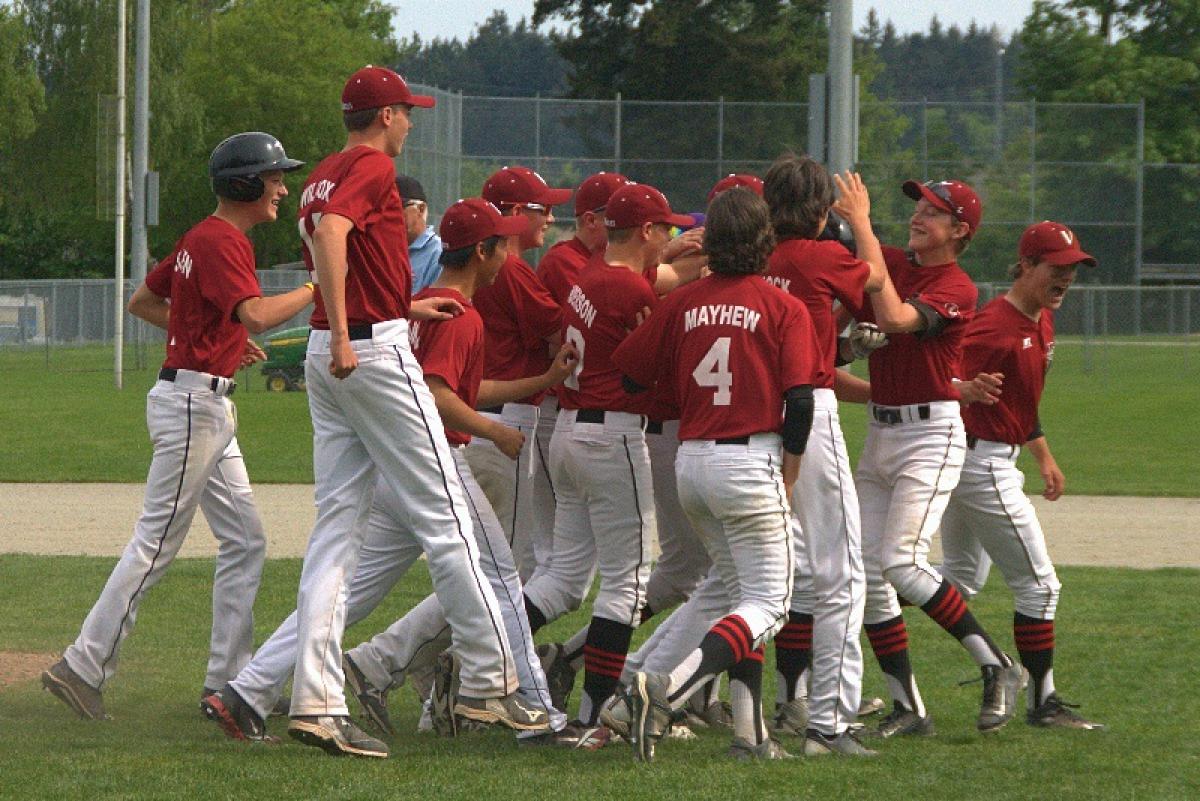 AAA Bantam Black Eagles sweep North Island on Doorschot's perfect game
Under sunny, mild skies, the Black Eagles put together their most complete game of the season so far in the opener against North Island in Courtney, BC. In a fifth inning 10-0 mercy victory, everything went the Eagles's way! On defense, Noah Doorschot pitched a perfect game: no hits, no walks, no-one reached first base! Noah also helped himself at the plate with a timely double in the fourth inning scoring two runs. In fact, Noah went two for two on the day. Behind him, the boys played error-less ball. On offense, Eagle batters hit hard and often: seven batters accounted for 11 hits including four extra-base hits. Highlighted by Toni de la Pena's first game of the season after a long injury, Toni went two for three including a triple to centre field scoring two runs in the fifth inning.

In the second game of the double header, the big question would be how North Island would respond to the Eagle's earlier, decisive victory. Facing Hayden Wilcox on the mound, the North Island boys answered by jumping into a quick two run lead on one hit and an Eagle error. At the plate, Eagle batters had trouble solving North Island's Jacob Volkers and had to wait until the sixth inning before Ethan Emile hit a long double to centre field scoring two runs. With another run scored on an error, the Eagles were now even with the suddenly scrappy Royals. Meanwhile on the Eagles mound, Hayden threw six innings of flawless ball, notching five strikeouts and allowed zero earned runs.

But the heroics were saved for the extra inning. The game ended in regulation innings (7) tied at 3-3. In the top of the eighth, with Jayden Wakeham doing relief, the Royals scored a run off a double to centre field and inched ahead 4-3. Jayden limited the damage to one run, but it was all up to the Eagles offense in the bottom of the eighth. Two Eagles walked and two Eagles got out. Last chance with Ethan Emile at the plate. Two out, three and two count. No pressure. With a mighty blast to the gap in left centre field, Ethan brought the tying and winning runs home and sent the Eagles victorious on a walkoff to Duncan on their next stop on a weekend road trip. But now we have a 6-4 record and moved up into sixth place in League standings.